Tokyo was more of a whim than a planned stop on our trip to Asia. We had the chance to add a three-day stopover on our way to Thailand so we decided to jump at the opportunity to explore a new country, one I’ve wanted to visit for a long time. Given the tight schedule though, we needed some help and so I turned to one of my favorite travel activities – the day tour.

Before I left home I reached out to Viator Travel, one of the largest tour operators in the world. In exchange for the tour I promised to share my experiences with you all to give an honest, first hand account of what it’s like to use Viator to complement the travel experience. I warned them that it didn’t guarantee a good review, just an honest one but they seemed confident in the product.

The specific tour I booked for us was the Mt Fuji, Lake Ashi and Bullet Train Day Trip, a full day outside of Tokyo visiting the world famous mountain along with several other beautiful sights in the Japanese countryside.

Viator is Latin for traveler, a fitting name since the company features more than 9,000 tours, attractions and activities in more than 800 destinations. Viator partners with hotels, airlines, travel agencies and tour companies in order to provide one-stop shopping for travel information and resources. I was most surprised at how robust the web site is, it’s much more than just a booking site, it’s a great place to research your entire trip.

Finally the morning of the tour arrived and everything worked like clockwork. The bus was early and took us to a central meeting point where we met our small group for the day. Visiting Japan in April is a lovely time to visit. The temperatures are perfect and if you’re lucky, your trip will coincide with the annual emergence of the cherry blossoms.

I live in Washington, DC so I didn’t think I’d be impressed by a few cherry blossoms, after all I can see them every year around the Tidal Basin. But, as happens many times when I travel, I was woefully mistaken. Driving through the suburbs into the countryside, the hills were dotted with bright pink explosions of nature’s signal that spring had sprung. They were everywhere, not restricted to a few locations, but instead spread in places where one would least expect them, creating spontaneous moments of joy to break up the otherwise monotonous drive.

Our guide for the day was Toko, a thirty-year veteran of the tour guide business and an incredibly patient tutor on the history and customs of Japan. Throughout the drive, but not constantly, she shared personal stories of growing up in Japan and some of the long and incredibly fascinating history of the country. While the information was certainly interesting, the star of the day, the reason why we were all there, Mt. Fuji was at the top of everyone’s minds.

While visiting Japan in April has a lot of benefits, the weather can sometimes be dicey. The morning we took the tour it was drizzly with a permanent fog hovering just overhead. Sadly, this fog extended to Mt. Fuji so, while we ascended the mountain, we never really got to see it from a distance. That means I never got ‘the shot’ of the mountain, but I do have some lovely photos of trees and fog.

Still, exploring the Mt. Fuji area was fun; I never realized there was a tourist village for example on the fifth level of the mountain. It was strange yet entertaining, certainly nothing I expected to see but what made the stop worthwhile was the shrine tucked away behind the souvenir shops, the Komitake Shrine. The area around the fifth station is called the garden of long-nosed goblin Tengu, who guards the area. The goblin’s full name was Komitake-Tarobo-Shoshin, and it is at the shrine where he is worshiped as the god of the open road; Johnny Cash would be pleased. 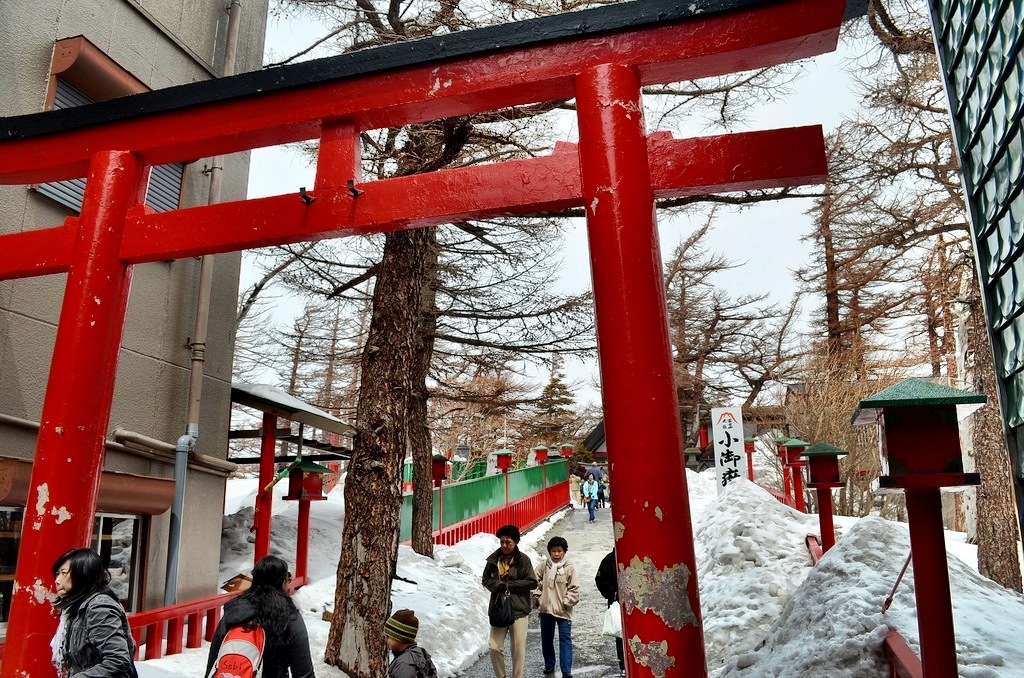 The rest of the day was a fun look at areas of Japan I never knew existed. After lunch we hopped on a boat to cross Lake Ashi where we explored the tourist village before ascending a cable car to the top of Mt Komagatake. Again, on a clear day Mt. Fuji would have been visible, but sadly not when we visited. Instead we were met with breathtaking views of the lake and Hakone National Park.

Today Lake Ashi mostly attracts tourists and nature lovers, but according to our guide Toko it is also the home of the Nine-headed Dragon. According to legend, the dragon once lived in the lake and terrorized villagers, demanding their children as sacrifice. One day a priest arrived in town and seeing the misery of the villagers, cursed the dragon and chained him to a rock in the lake. The dragon then reformed and became a dragon king and locals began to worship him and built a shrine in his honor. Instead of children, rice and beans is offered to the dragon king today.

As I stood on the top of Komagatake, bracing myself against the cold wind I thought how different my day had turned out than I had planned. I thought that the highlight would be seeing the legendary Mt. Fuji, star of millions of postcards, t-shirts and calendars. Instead I found myself overjoyed to be in a place I’d never heard of before, breathing in the crisp air and counting my lucky stars to be in THAT place at THAT moment.

On the way back to Tokyo on the bullet train, the Shinkansen, I couldn’t stop thinking about that moment on the mountain. Because ultimately that’s why I really love well done day tours, for their ability to introduce me to areas that are hard to visit efficiently or ones that I would never even see. Especially when you’re tight on time, they can transform a mediocre trip into a great way almost instantly.

Are you a fan of day tours too? Which one was your favorite?