Something I never get tired of doing when I travel is interacting with wildlife in some manner. In Australia this meant a rare kiss from a koala and in Alberta the result was a fantastic dog sled ride through the frozen woods around Lake Louise. One animal travel experience though had eluded me despite my desperate attempts to participate – whale watching.  Finally, after years of pining, I had my chance in Iceland where I learned the fine art of how to harass a whale in the North Atlantic.

It was cold and a little rainy, the smell of fish and brine filled the docks as we walked up the gangplank to the special whale watching boat. It was a busy Saturday and we were joined by at least a hundred other tourists, all eager to see whales in the wild. The boat was larger than I had imagined and there was plenty of room for the anxious passengers. The guides for the day were stationed high above in a special crow’s nest close to the passengers, but high enough to spot whales in the distance.

“The whales have been close to shore lately, so keep your eyes open,” our guide announced as we untied from the dock and began to putter out to sea. I barely heard him though; I was too captivated by the seaside community. It was a small town not far from Reykjavik and boasted the same, immediately recognizable Scandinavian design and architecture I had come to love during my brief stay. Within a few minutes though the guide excitedly announced our first whale sighting, far closer to land than even he imagined. 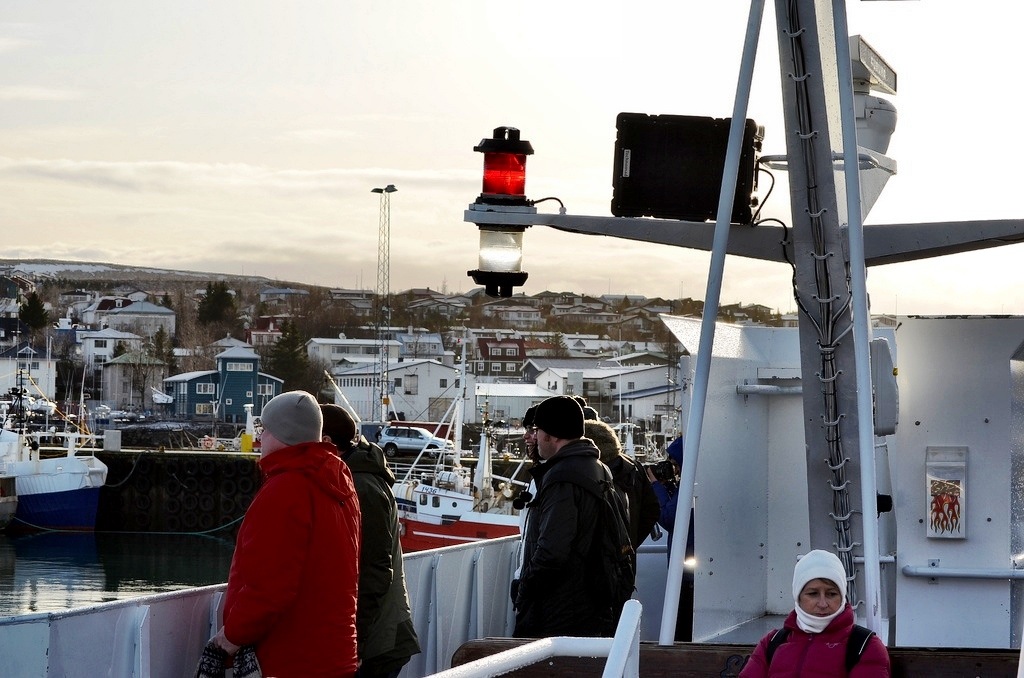 I think many of us have the same expectations when it comes to whale watching, and most it of is based on insurance commercials. You know the ones I’m talking about, the camera (located somewhere in the frozen north) zooms in and suddenly a majestic humpback whale explodes from the sea, turning and showing off a bit before crashing back into the ocean with a tremendous splash. Yeah, I kind of thought that during the three hour whale watching tour there would be, oh I don’t know, at least a dozen such demonstrations of extreme whaleyness. As it turns out, that’s not really what it’s like at all.

The first glimpse I had of our humpback was a large grey hump (appropriately enough) surfacing on the top of the water. Being just a few meters from a huge and truly beautiful animal was amazing and I couldn’t wait to see more of him. Then a few feet ahead a spout of water announced his emergence again, and again was followed by a graceful curl through the water. Then the sequence happened again, and again. I took hundreds of photos of what was essentially the whale’s back coming in and out of the water.

Directly below us were several meters of fish, the draw for our friend the whale. That alone promised to keep him, and the whale watchers, there for hours. The ship’s captain made a half-hearted attempt to venture farther out to sea in the hopes of finding another whale, but that effort was soon abandoned for the sure thing that was our friend the hungry whale near the harbor.

And so back we went to spend another hour and a half circling the feeding humpback. To be honest, I don’t think he minded, he was too caught up with his dinner. But after a while I started to feel bad about circling this single, solitary whale. I was also getting a little tired of the same view of the massive beast, his dorsal fin cutting through the water at regular intervals.

And then it happened, after a particularly enthusiastic chomping the whale surfaced, rolling over as he went back underneath the waves. A few minutes later he even gave us a wave with his fluke, apparently a somewhat rare phenomenon on the tours. I never saw the humpback breach like a well-done insurance commercial, but I did see enough of him to satiate my whale watching needs.

As we disembarked I looked through my photos and thought about the chilly afternoon experience. I obviously had built the experience up too much; I had imagined a show that very few, if any, people get to see. Instead I was a happy participant in one of the greatest wildlife experiences found anywhere in the world and not for a minute was I disappointed at the success we had in harassing the North Atlantic whale.

9 thoughts on “How To Harass a Whale in Iceland”