When I was planning our trip to Belgium, I solicited the advice of friends and experts who had visited the low country before. Almost immediately, I sensed a strange division amongst the respondents and it all revolved around two seemingly innocent towns near Brussels, Bruges (Brugge) and Ghent (Gent). Bruges has long been heralded as the quintessential European village. Untouched by the bombs of two World Wars, its Euro-cuteness has been well preserved for posterity. Ghent on the other hand is a large city, deemed by some as more authentic than Bruges and criticized by others for being less interesting. Armed with the knowledge that travel divisions existed, I set out to discover the truth behind these two Belgian towns.

Bruges is less than an hour from Brussels by train, which allowed us to be there in time for breakfast. As we sat eating a waffle in a bustling cafe on the market square, I leafed through the guidebook looking for suggestions. I really hadn’t done much planning for the day and didn’t know what, if anything, there was to do in the town. It was pretty, don’t get me wrong, but I’m active and need to almost always be in the process of doing something, anything. The one thing I knew I wanted to do was to try some chocolate. Belgium is a chocolate lover’s paradise and Bruges is one of best places in the country to find quality confections. At the advice of friends, we first walked to the Bruges institution, Dumon’s. 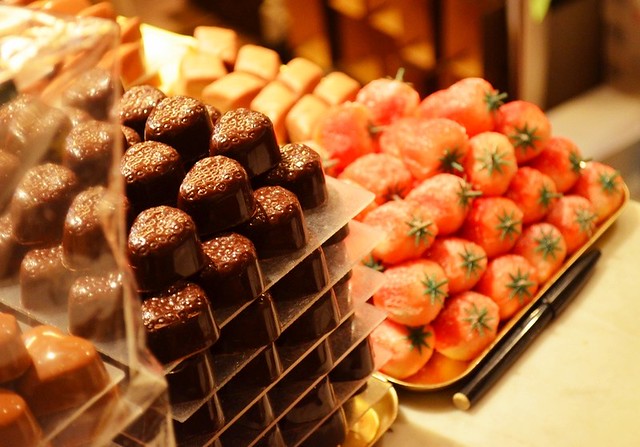 True to the advice we received, the chocolate at Dumon’s was some of the best I’ve ever had and even more importantly, the staff at the family run shop were as much fun to talk to as their chocolate was to eat. We left and strolled along the meandering streets, spent some time exploring the French Fry Museum, and within a couple of hours found ourselves back at the square where we started. We didn’t know what else to do. Like most European towns in December, there was a winter festival where we picked up a snack of hot fries, motivated by our recent museum experience.  We walked slowly back to the train station, certain we were missing something, but unable to figure out what. By chance we found ourselves in the Beguinage, a delightful pastoral enclave within Bruges that demands quiet introspection.

As the train pulled out of Bruges for the short hop to Ghent, I thought about Bruges and the criticisms I had heard about the Belgian hamlet. Most people complained that it is too contrived, too Disney of an experience. They feel that the medieval look is maintained just for the tourist trade, which is probably true. I don’t think that’s a bad thing though, the buildings themselves are indeed real and as one of the few places to remain completely intact after World War II, they’re proud of their heritage. Is it a little too cute at times? Probably, but who cares? It’s a fun place to explore. Ghent too was an interesting place to explore, but for completely different reasons.

The first thought that raced into my mind as I exited the busy train station in Ghent was that everything seemed grey. No doubt a condition of wintery weather in Belgium, the battleship hue was enhanced by the grey stone buildings and leafless trees encircling a nearby park. For the first time while in Belgium, I also felt at a loss. Ghent is in the heart of Flanders and while I can get by in French, Flemmish is impossible for me to comprehend. So it was with some fits and starts that we actually managed to divine our way to the heart of the city.

City is the best term, unlike its cousin Bruges, Ghent is quite large and very active, boasting a population of 240,000. You get the feeling that this is a city first and tourist destination second, in sharp contrast to Bruges. Once again, my total failure to research the city in advance left us a little dazed and confused as we meandered around the main square, peering up at the ancient and imposing Saint Bavo’s Cathedral.

As we enjoyed a post lunch waffle drizzled with Nutella at the nearby winter festival, I decided that it was ok if I couldn’t find any museums or famous sites. I was enjoying myself, enjoying exploring a new city and getting to understand it a little better. Our activities that afternoon didn’t vary all that much, mostly walking and admiring; soaking in the pre-Christmas rush of consumers desperate to find the perfect gift.

So which city is better? Which captures the real Belgian experience? Both of them and neither of them. Both Bruges and Ghent offer completely different experiences and you will walk away from both with different feelings and thoughts. Bruges is great for delivering that classic European feel, the gingerbread trimmed buildings and horse drawn carriages traversing canals. Ghent can be easily overlooked, since it doesn’t have the same appeal of Bruges, but it’s not to be missed. In Ghent you will understand daily life a little better while still enjoying historic sites and classic buildings. They’re both very different, but thoroughly enjoyable in their own ways.

I can understand the feeling of not enjoying a travel destination, there are many places I really didn’t like. But what I can’t understand is not wanting to explore a new destination at all. Prejudging a place so intensely that you don’t even want to visit is totally incomprehensible to me. So, if you find yourself in Belgium be sure to visit both Bruges and Ghent and see what you think. Who knows, you may discover a new favorite place.

Have you been to either Bruges or Ghent? What did you think?