Tomorrow is my birthday and for the 8th year in a row I’m 29, amazing feat really. Since it’s my birthday, I thought I’d write about two things I love: dogs and travel. No, it’s not a story about some strange traveling dog or how I pack up my dogs in a van and see the world. As much as I love my three, largish dogs, that sounds like hell to me. No, instead I want to share an amazing adventure in the backwoods of Canada, sledding with a team of remarkable Alaskan Huskies.

The barking is what we heard first as we drove up the snowy road. It was cold, Canada cold, and a fresh snow storm had turned highways into shifting avenues of snow and ice. Being a good Southerner, I was severely overdressed and I emerged from the car looking like a wintery sumo wrestler, but ready for the elements nonetheless. 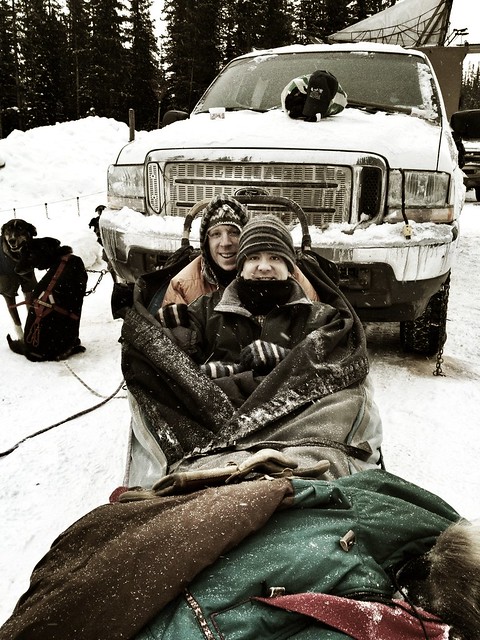 Megan, the hardy owner of the Kingmik Dogsled Tours, came over and introduced us to our dogs for the adventure. This experience was at the top of our list not just because it’s a lot of fun, but because we own two huskies and dog sledding has long captivated us. Having been drug across more lawns than I’d care to admit, I can personally attest to the raw power of a sled dog and to see a well trained pack doing what they love best was the culmination of a dream.

These weren’t Siberian Huskies though, these were Alaskan Huskies. Unlike the iconic Sibes, the Alaskan variety is the result of cross breeding with a bunch of different breeds to produce a strong and agile sled dog. Essentially, Alaskan huskies are mutts, and damn cute ones at that.

I spent some time with each one, learning that Amos was a little skittish of new people and that Shiloh loved to give big, wet dog kisses. Sheila though drew me in right away with her glacier blue eyes signaling that one of her ancestors was indeed a Siberian Husky. I gave her a pet before hopping into the sled and prepared myself for what lay ahead.

Not to be rude or anything, but I looked like FDR in that sled, bundled up and being trundled about the snowy woods surrounding Lake Louise. It didn’t matter what I looked like though, before I could say I was ready, we were off and the dogs were at work.

Driving through the new fallen snow was exhilarating. The dogs clearly love to run, and have to consume at least 6,000 calories a day to keep up with the activity. We talked with Megan throughout the adventure, learning about her and the business. Things have slowed down a bit, and not as many Americans are visiting as used to, but on the whole things are good. Megan was proud of the fact that more Canadians are visiting the Banff/Lake Louise area, partaking in sledding which she called an important part of Canadian heritage. And it is. In the woods, an hour from Banff and what can safely be called the middle of nowhere, I began to get an appreciation for the beauty of Canada and how remote so much of it is. This was not an easy area to first explore and the early pioneers had to have been made of tough stuff to endure their first winter here.

About half way through we passed a great wooden archway before turning around, the marker of the Continental Divide and the boundary between Alberta and British Columbia. In the span of a few seconds we had traveled through two provinces and back again.

Most of the dogsled run was along the old Trans-Canadian highway, now closed for recreational use since the new road was built. As we were returning Megan veered off into the woods, and in the process fulfilled a dream. I felt like a character in Grimm’s Fairy Tales, careening through the woods as the sun struggled to shine through the grey sky. Suddenly the pack of dogs erupted out of the woods into an empty field, the new snow untouched even by a hungry squirrel or rabbit. We stopped, looked at the mountains surrounding us and behind me I heard Scott say, “Can you believe we’re here, doing this?” I couldn’t, but I could. That’s why I love to travel, for moments like those, moments where you have to pinch yourself to really believe you’re lucky enough to be at that spot at that moment.

After the sledding, the dogs received treats of frozen chicken and I gave each one a hug in thanks. These pups may not be like mine, currently sleeping on a mound of pillows on the couch or snuggled next to the fireplace on a snowy morning, but they were happy. They were happy to be working and doing something they love, something we should all be so lucky to enjoy.

10 thoughts on “My Birthday and Dogsledding Through Two Provinces”