Chocolate or Nutella. A seemingly simple choice, especially since they’re so similar to one other, but with dozens of eyeballs boring into my back and the server at the waffle stand smiling not-so-patiently, it was suddenly impossible to decide. I hastily went with the Nutella, as if there was any doubt, and took my freshly baked Liege waffle off to the side to eat with as much dignity as I could muster knowing full well that I would soon have Nutella streak marks all over my face. 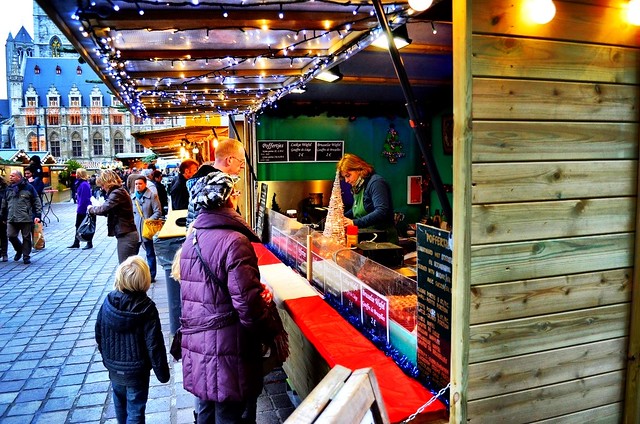 Waffles have been around for centuries and while they’ve evolved over time, there is no country as passionate about these baked doughy treats as Belgium. Most of the waffles found today originated around the 17th and 18th centuries, but two in particular are found throughout the country. The Brussels waffle is most similar to what we enjoy here in the U.S. It’s a light, deceptively so, dough cooked into a rectangular shape featuring large pockets. My favorite though was the Liège waffle, something I had never even heard of before my trip to Belgium. What makes the Liège version different is that it’s richer, denser and sweeter than the Brussels variety. It’s also in a less uniform shape and when topped with Nutella makes for a delicious snack or dessert.

I always thought Belgian waffles were a stereotype, some weird food phenomenon that had made its way to the US through misunderstanding and ignorance. But no, waffles aren’t just found in Belgium, there are found everywhere in Belgium, a staple snack food at it best.

The finest example of waffley perfection I enjoyed was while strolling through a Christmas market in Ghent, in the heart of Flanders. It was chilly, but not freezing, but the smells of Christmas were definitely in the air. Gluhwein wafted from countless stands and a mistletoe seller created a potpourri of festive smells that made the impending holiday undeniable. Standing in the shadow of the massive and ancient Saint Bavo Cathedral, I couldn’t help but smile at the scene of pure Euro-awesomeness in front of me. Then I saw the booth I was looking for, the waffle maker. It was our last full day in Belgium and while I may have had one or two (or three of four) waffles during our stay, I wanted one last treat to cap off the week in Europe. That’s when I vacillated between chocolate or Nutella, but was confident with the choco-hazelnut choice once confirmed. I went behind the stalls, next to the Cathedral, and tried, I really did try, to eat the messy snack as neatly as possible. An improbably small fork (forklet really) snapped when I tried to tear apart the caramelized gooeyness of the waffle and so I gave up. Decorum disappeared and I bit into it like a kid munching on a gigantic sucker. 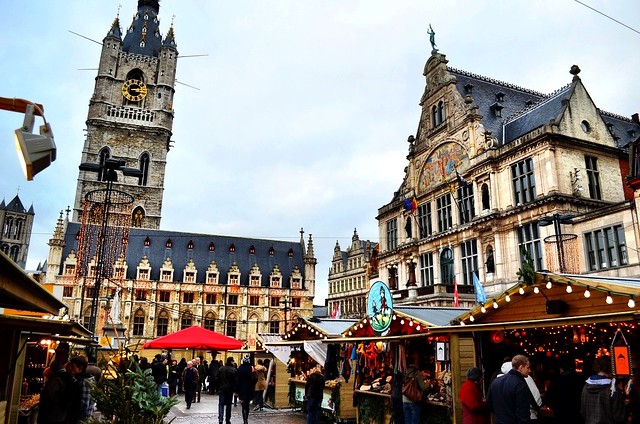 Like most great things in life, it was over before I knew it or wanted it to end. We strolled contently along the street, under the tram wires and evading holiday shoppers before arriving at the train station and bidding salukes to Ghent. It may have been a grey and chilly day, but that simple snack lifted our spirits and reminded us of why we love Belgium.

What favorite snack have you found on your travels?