The Belgians are awesome. Unlike some other countries I won’t mention, they don’t care if everyone knows they like the best things in life. My best I mean the worst for them physically. To spend any time in Belgium is to learn to love beer, chocolate, waffles and of course french fries. French fries in particular occupy a place of reverence and respect usually reserved for national heroes and winners of Eurovision. These crunchy bits of goodness are omnipresent in the low country of the Flemish and Walloons, in fact they mastered this art form. That’s right, I said it, this junk food is an art form and I can prove it, there’s a museum devoted to it.

Brugge is famous for its storybook charm; cobblestone streets, medieval architecture and a general sense of “Hey, I’m in Europe!” Since 2008, a new accolade has been added to its list of honors, Brugge is also home to the Fry Museum (Frietmuseum). It wasn’t enough for Belgians to just serve this delicious indulgence on every street corner in the country, a museum had to be established to give the fry its due credit.

It was a chilly December morning as we wandered through the tiny center of Brugge, somehow getting lost after only a few steps. Through luck and not navigation we stumbled onto the Frietmuseum, which is housed in a gorgeous 14th century building. Although I went into the experience with low expectations, I was almost immediately surprised by the Temple of the Fry.

The museum is well thought out and much larger than I expected. The guest is led through the history of the fry, from the first cultivation of potatoes in South America, to its introduction in Europe and the day of days, when the fry was invented. A combination history museum and assemblage of artifacts and curios make the experience fun and interesting. After spending an hour or so learning everything there is to know about the fry, it’s logical to want a taste. Luckily the folks at the Frietmuseum thought of this and at the end of the tour is a small fry cafe where you can taste crispy Belgian fries for yourself.

Usually these pop culture museums aren’t very well done and err on the side of hokey rather than interesting. The Fry Museum is different though and an hour exploring the quirky museum is a great way to learn more this important part of modern Belgian life.

What are some unusual museums that you’ve found on your travels? 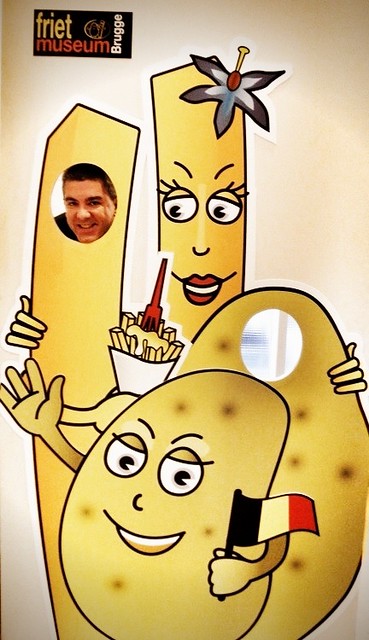 6 thoughts on “In Honor of the Fry: Exploring the Frietmuseum in Brugge”