Not all business trips are great, but the year I had a conference in Honolulu was like winning the lottery of work travel. Not surprisingly, I managed to add some time to the trip after my work was done in order to truly enjoy my first visit to the 50th state. One of the unintended highlights was our journey to Pearl Harbor.

We knew Pearl Harbor was in Honolulu, everyone knows that, but it wasn’t until our last day in the capital city that we decided to pay a visit. Both my grandfathers fought in World War II, one in the Pacific and one in the European theater, but they never talked about it. My parents were raised not with stories of the war, but with the effects of it. The work ethic, the desire to make something of their lives were the lessons my grandfathers passed down to their children rather than war stories. And so it was not with a head full of family anecdotes about the war with which I approached the memorial site, but rather just a general sense of what this site would have meant to the boy soldiers who later became my grandfathers. 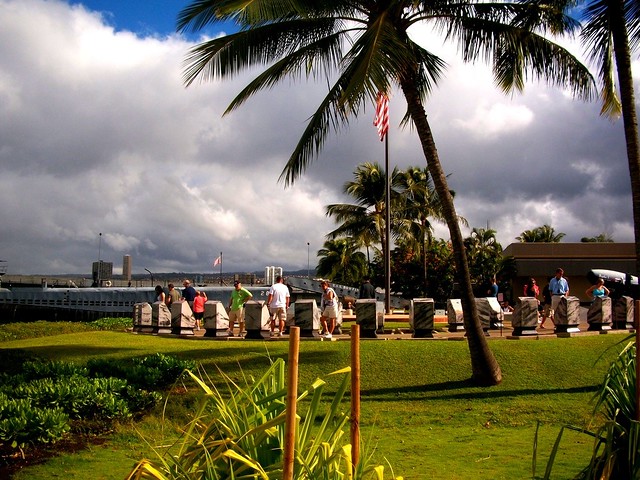 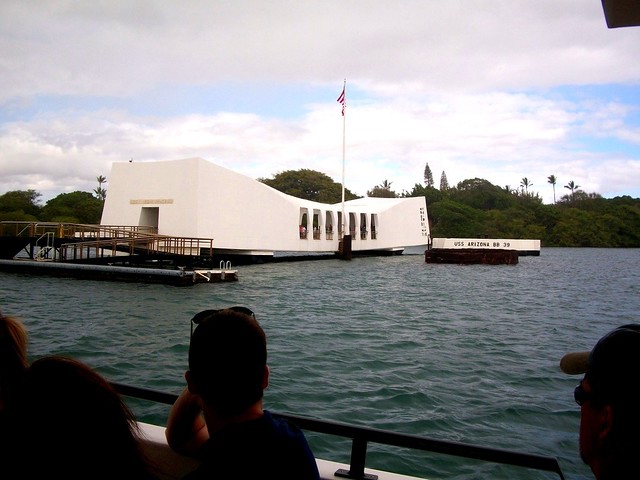 The World War II Valor in the Pacific National Monument, what is conventionally known as Pearl Harbor, includes memorials to the USS Arizona, USS Oklahoma and the USS Utah. A new visitor center just opened, but when I was there it was still a mess of construction cranes and tarp. None of that took away from the moment though.

We somberly boarded the large boat that shuttles millions of tourists out to the site of the U.S.S. Arizona Memorial every year. The boat was a hodge podge of tourists, young, old, veterans and quite a few Japanese visitors. If you visit Hawaii, the site of thousands of Japanese tourists is nothing new, but I wondered what they thought of the Pearl Harbor memorial. I wondered if their feelings were as strong as mine.

I’m not usually moved by monuments or memorials, but Pearl Harbor was different somehow. As the boat docked at the floating platform under which the sunken Arizona lies in situ, I caught a glimpse of the tears of the Harbor bubbling up from the dark bottom. The tears are oil slicks still being released from the watery wrecks, oftentimes appearing as black tears on the water as they float past. They were an all too appropriate welcome to a site of such sorrow.

I walked through the narrow memorial, and was drawn to the back where the names of the men who gave their lives are inscribed on hard stone. It’s so easy to look at a few names and see them as nothing more than a statistic, a historical fact that belongs in a text book. Maybe it’s the link to my grandfathers, I’m not sure, but instead of names I saw faces, families, and laughter caught short. I saw the names as people and not etchings, as heartbeats that were so horrifically and casually snuffed out. I looked up and caught sight of the American flag flying over the memorial and all the emotions coalesced into feelings of pride and sorrow, relief and despair. I cried quietly off to the side while others took photos and bowed their heads in silent prayer. As quickly as the moment came, it passed, and soon we were back on the boat returning to shore away from the ghosts of war and back to the warm embrace of leis and palm trees. 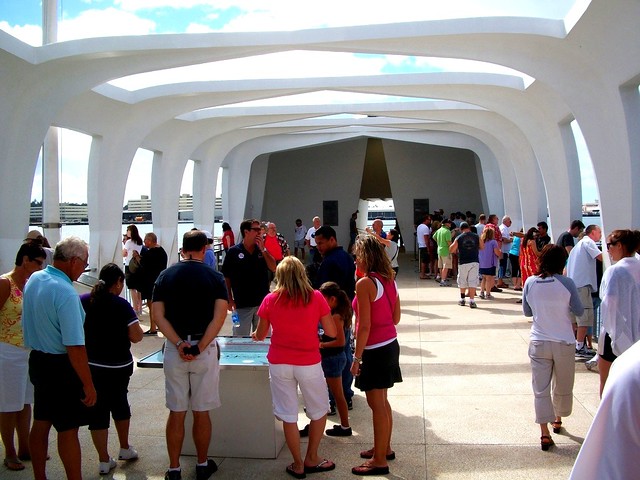 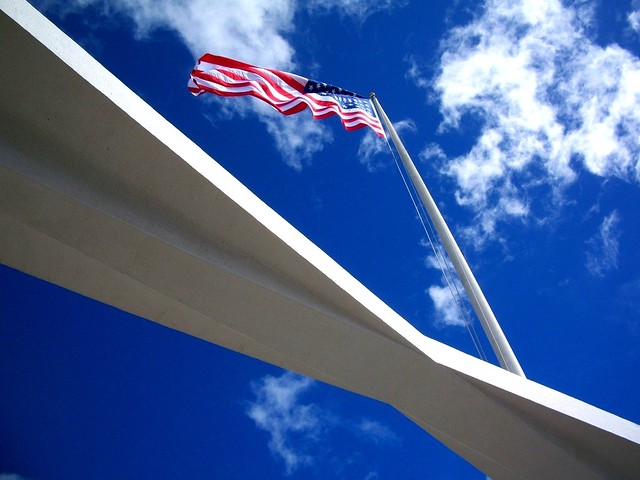 Pearl Harbor means different things to different people. It is a living memorial, a place of education and a symbol of the start of a war that left the earth changed forever. For me though, it is a place of family and memories, of pride and relief that my own grandfathers weren’t taken like so many thousands of others. But more importantly, it is a place of optimism and hope for the future, that something so great and tragic will never happen again.

Today is the 70th Anniversary of the horrible attack on Pearl Harbor and the entry of the United States into the Second World War. This post is dedicated to the brave men and women who served and the families who supported them.

4 thoughts on “Reflecting on Family and History at Pearl Harbor”