Puerto Rico surprised me in a lot of ways. I wasn’t sure what I was expecting exactly, but whatever my expectations were they were instantly surpassed. I was a guest of the San Juan Marriott Resort, a gorgeous property with a prime oceanfront location, and I was shocked at the variety of activities available to their guests. I knew there were a lot of great adventures to be had on Puerto Rico, but the one thing I never expected was a bioluminescent bay.

Night had just fallen as we arrived at La Laguna Grande and neighborhood of Fajardo was a hive of activity. Loud music reverberated from nearby bars and restaurants and hundreds of people were descending on the waters for a Friday night trip to the famous Bio Bay. 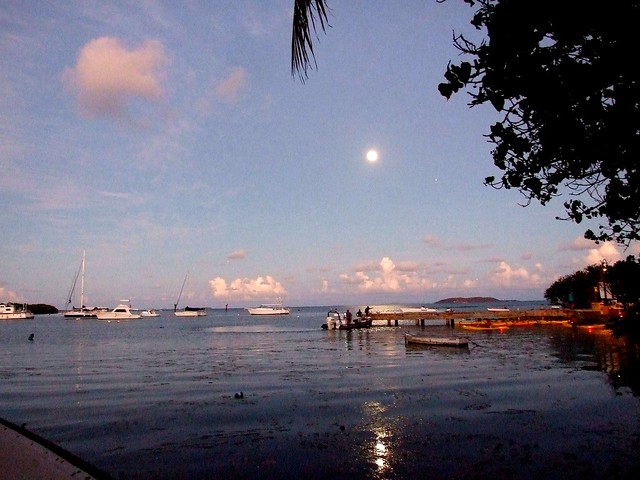 Puerto Rico has three bioluminescent bays, but the one at La Laguna Grande is the easiest one for visitors to San Juan to visit. Why are these bays so impressive? It’s all because of millions of micro-organisms in the bay that actually glow when agitated. This sterile definition though doesn’t even come close to describing the real magic of the experience.

After a lengthy briefing by our guides, it was finally time to jump in the kayaks and set off for the promised natural wonder. We were in tandem kayaks, a mode of transportation which has not been kind to me in the past, and I was a little skeptical about our ability to actually stay in the boat. Within a few minutes though we got the rhythm of the rowing and entered the mangrove forest.

There’s something Tolkienesque about floating through a mangrove forest at night, the only light coming from the moon high above. That magic was interrupted occasionally by the sounds of drunk revelers returning from the bio bay, an odd Friday night activity but one that seems to be popular with the locals. 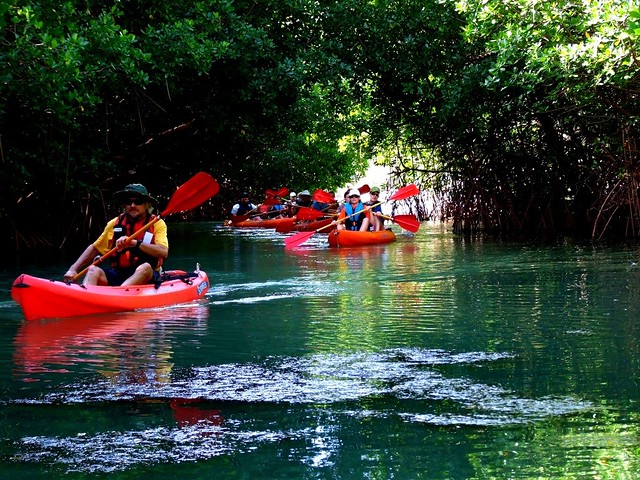 After a lot of sweat and crashing into a few tree trunks, we finally emerged from the labyrinthine forest into a vast open bay, we had finally made it to the promised land and I wanted to see natural brilliance.

I didn’t really know what to do, so I dipped my hand in the water and waved it around. Instantly my hand became illuminated. The more I moved my hand around, the more light was created, it was if there was a tiny spotlight in the water spotlighting my limb. Encouraged, I started thrashing my oar around, waving my arms in the water and nearly managed to capsize the kayak. But it was amazing. Then I started to notice the fish around us, darting about like a a million stars. The universe had been turned upside down and I was looking down into a starry night underwater. 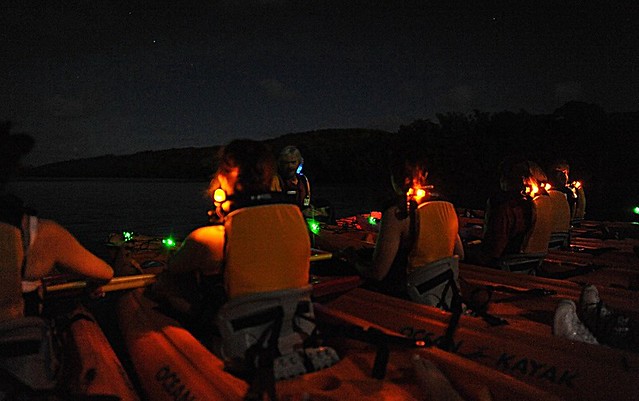 My kayaking partner and I slowly paddled around the dark bay, gliding along the black mirror staring down into the water for a sunburst of fish or shooting stars of minnows. We weren’t alone either, on any given night around 150-200 people visit the biobay, gawking downwards into the watery depths as I did. As you can imagine, thousands of people visiting a natural wonder can be damaging. Luckily, a few years ago the Puerto Rican government put strict controls on who can access the bay and how they do it and swimming was banned completely. Humans had introduced a variety of chemicals into the bay, altering the ecosystem and damaging the light producing microorganisms. Since the restrictions though, the bay has recovered and is now as bright and awe inspiring as it ever was.

Puerto Rico has a lot to offer visitors from heart pounding zip lines to quiet time on the beach. The bio bay at Laguna Grande though is one of those rare experiences that transform a trip into an adventure.