As a guest of the St. Kitts Marriott, I had a lot of great food. Unlike a lot of other resorts, the property features a variety of culinary options that are reasonably priced and delicious, a feat which many other resorts can’t seem to achieve. When you’re on vacation though, it’s good to explore the local area and St. Kitts offers plenty of savory culinary options for every palate. One of the most interesting restaurant venues though is what locals call The Strip.

In what can only be an ironic nod to its desert namesake in Sin City, The Strip on St. Kitts is a collection of beach shacks on Frigate Bay. The phenomenon all started in the 1990s when the Monkey Bar opened its “doors” on the beachy boulevard. The Monkey Bar started with just an open-air dance floor and plenty of drinks, but has since expanded to include a restaurant. Like all the shacks though, the action really happens on Friday night when it’s the place to be on the island. 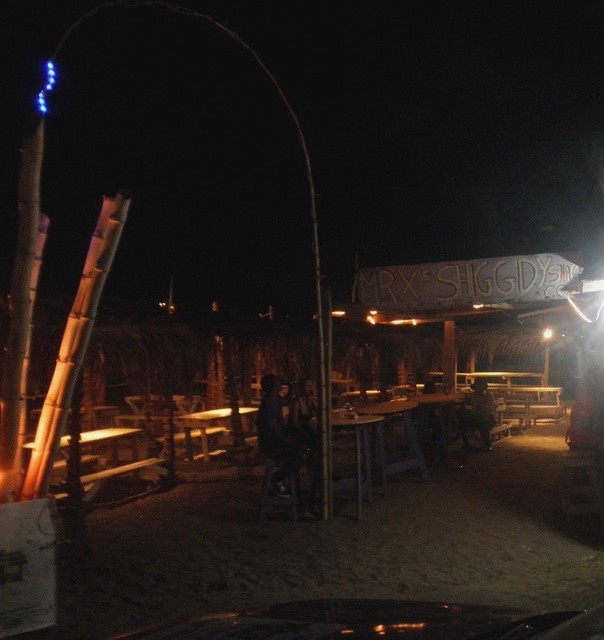 The immense popularity of the Monkey Bar spawned a wave of similar establishments, most either on The Strip or a short stroll away. Inon’s Bar, Sunsplash, Ziggy’s Bar, the Rainbow Bar and eDock are just a few of the other establishments now firmly entrenched on the Bay, offering everything from live music to good food and even complimentary WiFi.

When I visited The Strip, our evening began at one of the busiest beach bars, Mr. X’s Shiggidy Shack. We were welcomed into the open air gin joint by Mr. X himself as we bellied up to the bar to order a round of Tings With a Sting. Ting is a popular soft drink throughout the Caribbean and is made with Jamaican grapefruit juice. The Zing is a potent extra added when the sun sets and the music starts.

I sat there with Ting in hand, watching a curious mix of locals and tourists dance to the thumping music and laughing the night away. We didn’t stay at Mr. X’s long, and slowly ambled along the Strip, watching a similarly curious mix of people enjoying their Friday night and the start of the weekend.

I pulled up a chair at a picnic table and alternated between people watching and listening to the crash of the waves on the beach just a few feet away. A thin layer of salt seemed to coat everything like a tropical dew and the full moon cast a bright light on the evening party-goers.

I didn’t stay out long. I was tired, it was late and based on the energy levels of the bar-goers, I knew I was outmatched. Instead I just soaked in the vibe, that feeling of contentment and laid back fun that tends to define many parts of the Caribbean, and was thankful that at least on St. Kitts it was still so easy to find.

7 thoughts on “Exploring the Beach Shacks of St. Kitts”