I’m an active traveler, but I have never claimed to be in the best shape. My lack of fitness stamina never usually limits my adventures though and I’m almost always willing to try anything once. I’ve hiked Kings Canyon, the Koloiki Trail and countless other physically demanding, outdoorsy activities. That’s why when I saw the description for the volcano hike in St. Kitts, I wasn’t too worried.

As a guest of the St. Kitts Marriott Resort, vacationers have a wide variety of activity options which the hotel can help arrange. Tours to Brimstone, the UNESCO site, ATV excursions or exploring the capital city Basseterre are all great options for travelers to this idyllic island. There is also the opportunity to hike the highest peak on St. Kitts, Mount Liamuiga.

The volcano towers above the island an astonishing 3,792 feet and is one of the highest peaks in the Caribbean. Mount Liamuiga is largely dormant, although there are some unverified reports that it erupted in the 19th century. It’s of a curious coincidence that the old name for the gassy peak was Mount Misery, a much more fitting name in my opinion.

The adventure came with the following warning: “This is an exhilarating and rugged physical adventure, involving five hours of rough hiking, so you must be physically fit to participate.”

While at first blush it may seem intimidating, it’s been my experience that most extreme activities come with a similar warning. It’s to make sure people who shouldn’t participate don’t, but I’ve never had a problem enjoying even the activities with the most dire of warnings. Until St. Kitts.

O’Neil Mulraine, our trek guide, picked us from the St. Kitts Marriott, who sponsored my trip, and we drove the short distance to the base of the volcano and the start of a dense rainforest. At first it was very pleasant. We enjoyed walking through the dense foliage and stopped often to admire native plants and listen for the sound of green vervet monkeys in the distance. Then we started to ascend. Hiking up the volcano wasn’t easy, I’m not going to lie. It was steep and loose rock, mud and massive tree roots peppered the path. But it wasn’t THAT bad. The ascent took two hours, and I remember wondering along the way how were we going to get down. Surely there was another path, surely we wouldn’t return down the same, hard to navigate path that would be next to impossible to tackle going downhill. Surely. 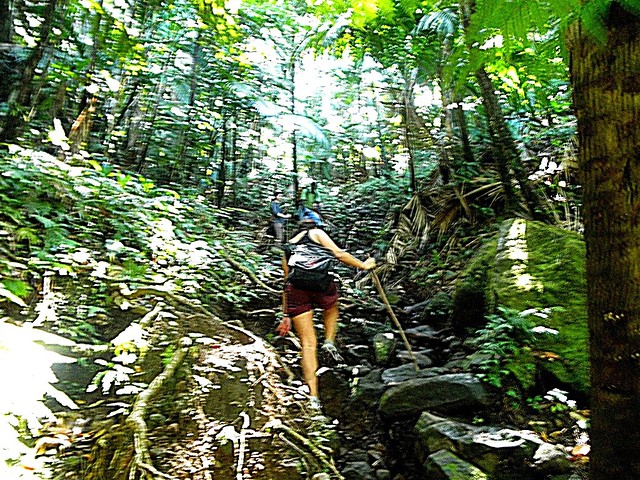 Finally, we were there, we were at the peak of the mighty volcano. We shimmied along a cliff face with not much below us other than a massive fall, and found a seat on some rocks overlooking the vibrant green caldera of the old volcano. And my jaw dropped.

A dense, intensely green canopy sprawled across, covering everything in sight. It was stunning. We were so high up that clouds were drifting past, creating an otherworldly feel to the whole experience. Behind us we could hear the chatter of mongoose fighting over a bit of food and somewhere in the distance a monkey called out. It was hard and I wasn’t happy with the hike, but what a payout. I sat there quietly, catching my breath and snacking on sandwiches content to watch the show nature had arranged for me. 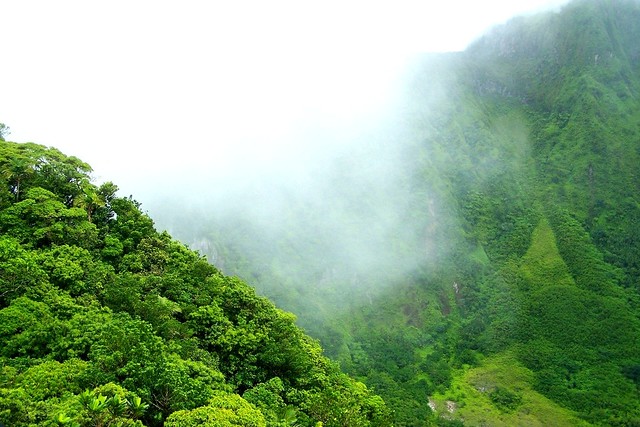 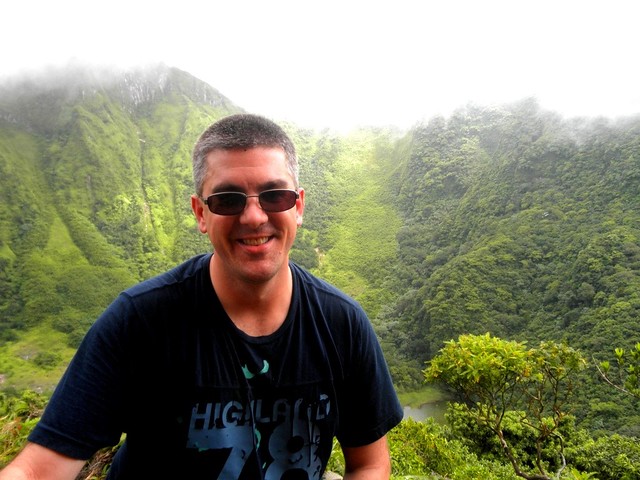 I didn’t want to leave. Not just because of the view, which was great, but because I didn’t want to climb back down the mountain. My legs were jelly and I seriously questioned my ability to make the trek. It took a long time, mostly because of me, but we somehow made it down the massive volcano. It wasn’t the cardiovascular exertions that killed me, it was the fact that my legs had been pushed to their limit. The two hour climb down was entirely downhill on hard to navigate paths fraught with hazards. I fell, I cursed and yes, I even broke my camera. (not on purpose) But I did it and I don’t think I’ve been as proud of myself in a long time.

Many people visit St. Kitts and stay at the St. Kitts Marriott for the beaches and warm Caribbean sun, both of which are in clear abundance. But with a little effort, visitors can enjoy something else that is so unusual and remarkable, it’s hard to say you’ve visited St. Kitts without doing it. That’s why, even with all its physical exertions, the Mount Liamuiga climb is something everyone has to try at least once in their life.

15 thoughts on “Paying the Price for Lunch on a Volcano in St. Kitts”