I talk about travel a lot. Usually with anyone who will listen, and many times with people who are just standing still long enough for me to strike up a conversation. Oftentimes the conversation comes around to my favorite destinations and my advice for a better vacation. Whenever I utter the word ‘cruise’ though, I’m met with a wide range of facial expressions. From people who have never cruised before, those expressions usually aren’t positive and instead I wonder if I accidentally punched them in the face or perhaps insulted their mother. Amongst travelers who have never been on a cruise, there is a certain level of discrimination against this popular and fun way to travel and so, I want to address their concerns in this defense of cruising.

Too Many People – The modern cruise ship is large, massive even. It truly is a floating city. The people who designed these floating metropoli though knew this, and spatial planning is a key aspect in the ships. We’ve been on several large cruise ships and yes, there are a lot of people, but it never impacted our trips. We tend to do our own thing and I honestly can’t remember a single instance when I was annoyed by the mass of people. There are a lot of things to do onboard, and it’s rare to find everyone doing the same things at once. That being said, disembarking at a new port can be a pain onboard a large ship, but not insurmountable.

But what most people forget is that large ships are not the only cruising option. There is a wide variety of small ship and expedition style cruises available that offer some very unique experiences. River cruises are adept at taking passengers into close proximity to some of the great capitals of the world, be it in Europe or on the more exotic Mekong River. Excursion style cruises use small ships and give passengers special access to global treasures like the Galapagos, Antarctica and the Arctic in a way that large ships simply cannot. Finally, there is a class of small/medium size cruise ships that are more upscale and unusual. Whether it be for their extremely high-end offerings, unusual cruise routes or style of ship (sailing yacht for example) these ships are smaller and more exclusive. 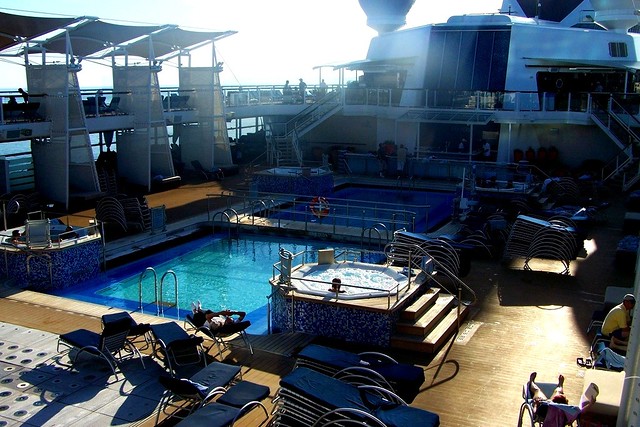 Nothing to Do – I hear this complaint a lot too. People have the notion that all people do on cruises is eat, sleep and lounge by the pool. If this is all you want to do, sure, your trip can be limited to these activities, but there are so many more options onboard most modern cruise ships. First, keep in mind the fact that most of your days will be spent in a new port of call, so your time on board isn’t as all consuming as one might think. For those sea days though, the ships do a masterful job of organizing activities to appeal to a wide range of guests, from kids to grandparents. I usually find myself in the quandary of being unable to do everything I want to do. Language lessons, trivia contests, putting contests, cooking classes, exercise lessons are just a few of the activities usually offered on cruises. Plus don’t forget that the ships come equipped with spas, gyms, pools, casinos and evening entertainment options. I have never, ever once lacked for activities on a cruise.

Too Much Food – This really is a complaint of an older era of cruising. Just like any other travel choice, you can choose to do as little or as much as you want. Some would say that when I visit Paris all I do is eat, and that’s pretty much true. I don’t think eating a lot has to go hand in hand with cruising though. In fact, most cruise lines have changed with the times and offer a lot of healthy eating options and a higher quality of fare than in years past. Yes, there are midnight chocolate buffets, but you don’t have to go. When I cruise, I have three mains a day and perhaps a snack, like a gelato. That’s it, and I don’t think it’s excessive. A lot of people actually lose weight when they cruise, a result of consistently good quality food and exercise. If you want to pig out on a cruise you can, but it certainly isn’t something that is pushed on the passenger, at least not in my experience.

Not Enough Time in Destinations – This is a valid concern and one that I’ve struggled with in the past. The great benefit of cruising can also be its Achilles heel. It’s great to only unpack once on a trip and see a rich variety of countries in the span of a week. To visit the ports of call on your own would cost significantly more if done without a cruise. But, it means that you only have a day or maybe two in any one location. In the Caribbean, this usually doesn’t create a lot of heartache, but it can deter many from other cruises around the world. We took a European cruise two years ago and loved it. We knew going in that our exposure to the new places would be brief and instead of getting a total understanding, we would be getting tastes. It was great for us, we were able to visit places that are difficult to visit independently and for other places, it gave us the opportunity to see if we liked them enough to return. The example I always give is Athens and Istanbul. Prior to the cruise, I thought I would love Athens and hate Istanbul; the opposite proved true. Rather than plan a week long vacation to Greece and Athens, which would have been a disaster, I instead learned enough to know Istanbul is a city I want to explore in much greater depth. If it weren’t for the cruise, I would never have known that.

Cruising may not be the best travel option for everyone, but I do believe there is a cruise for almost every type of traveler. Whether it be a Lindblad Expedition to the Galapagos, or a Celebrity cruise of the Eastern Caribbean, there are more options than ever to enjoy the unique experience of traveling on the high seas. Cruising is also extremely budget friendly and frankly, a lot of fun. So if in the past you thought cruises weren’t for you, I’d just ask you to reconsider this fantastic travel option.

13 thoughts on “In Defense of the Cruise”