Sammy didn’t say much, well not that I could understand at least. His voice was soft and the words all seemed to blend into each other in a unique blend of Pitjantjatjara and pidgin English. Luckily the interpreter seemed to have no problem understanding Sammy and sharing with us the presentation.

The Anangu Tours are part of a larger tourism consortium that is 100% Aboriginal owned; their shareholders are from three communities surrounding Uluru. In the Pitjantjatjara language, anangu means person or human being, and the tours are designed to teach newcomers about the native peoples. The tours are given in the Pitjantjatjara language, with interpreters translating for the guides. It’s not that Sammy didn’t know English, he certainly did, it’s that they want visitors to hear the nuances of a language most of us have never before encountered.

Instead of hopping on a large coach bus and circumnavigating the rock in the comfort of a comfy seat and air conditioning, the Anangu Tours are meant to teach visitors about a variety of aspects of Uluru from a uniquely Aboriginal point of view.

There are several different tour options, but all combine similar elements: presenting the culture of the native peoples in an accurate manner and teaching visitors about certain aspects of the Tjukurpa. Westerners may know Tjukurpa by the term Dreamtime, but it is so much more than that. Tjukurpa is Aboriginal law, culture, history, and their world view all bundled into one. It is expansive, impossibly ancient and much of it is shrouded in mystery, transmitted only to certain people at particular times in their lives. There are certain public stories though, which Sammy shared with us. 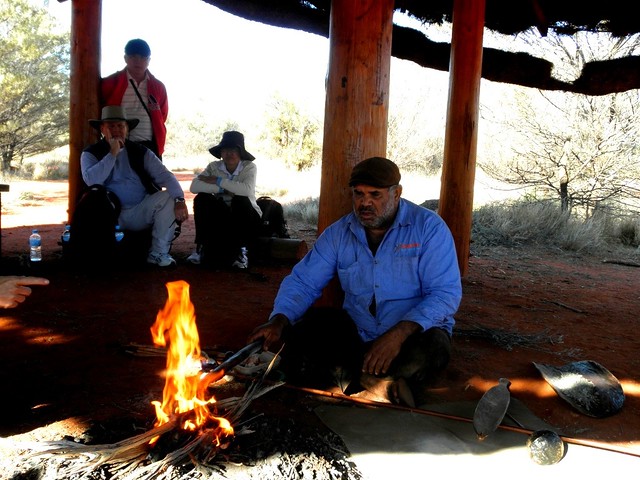 It was hot and dusty as we left the Culture Centre and walked to a nearby path where Sammy began teaching us about daily life as his ancestors lived it. Before our eyes he chopped, diced and heated leaves to make natural glues and resins and proceeded to forge tools and weapons. It was so expertly done I didn’t even notice what he had accomplished until it was over. We learned about everything from food collection to the very difficult process of just staying alive in the harsh terrain of the Outback.

“Sammy said he’d like to tell us a story now,” our interpreter broke in as we walked closer to Uluru. In the shadow of the huge natural wonder we sat on logs while Sammy began drawing an elaborate pictogram in the sand with a large stick. Like a master artist, he created within just a few minutes a complex image consisting of wavy lines, dots and symbols. This memory device is how thousands of stories have been handed down from one generation to the next for tens of thousands of years. 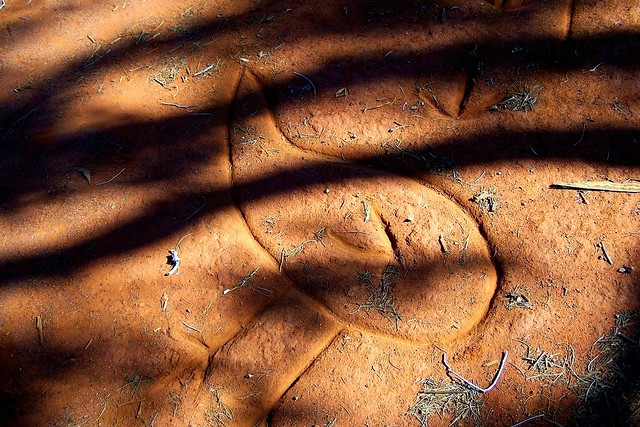 The story Sammy then related had to do with a small cave seen on the face of Uluru right above our heads. It was a morality tale, involving ancient characters and important lessons. The message of the tale was suddenly evident, not to take things that don’t belong to you or to harm the land needlessly. Everyone else got the message at the same time, and we all instantly felt guilty. It was Sammy’s way of telling us to do no harm not just to Uluru, but to the environment around us which the Aborigines hold so sacred.

Anangu landscapes are therefore full of meaning. They represent creation stories and associated knowledge of Law, relationships, plants, and animals represented in the shapes and features of the land. This knowledge has been passed down from generation to generation. With the knowledge comes responsibilities and obligations to care for the land and for each other in the proper way.

We walked to the base of the rock through a meadow of spiky spinifex to where the notorious Ayers Rock Climb is based. For decades, visitors have traveled to Uluru in order to climb it, a decidedly dangerous and strenuous activity. The native peoples though find this offensive and cite the scores of deaths of idiotic climbers as proof that the rock shouldn’t be climbed. The rock climb is currently being phased out, but for the moment morons can both risk their lives and offend the Aborigines at the same time if they should so choose. 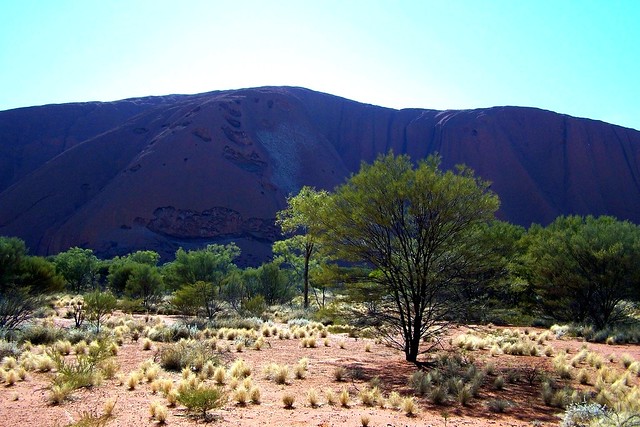 By the time we left Uluru, I had seen the massive rock from every angle and in every light, but it wasn’t until the Anangu tour that I truly began to understand its significance. To many of us, Uluru is an attraction because of its size and how odd it is for something so massive to be placed in the middle of nowhere. For the native peoples of the area though, it’s much more than just a rock. It’s an important part of their culture and the stories found all over the massive rock face define who they are as a people.

Before I left the tour, I asked Sammy if it was ok to take a few photos and write about the experience. In return I got a warm smile and a hearty “Yes,” from his interpreter. Sammy said that sharing the message is the only way to explain the importance of Uluru not to just benefit him and his family, but to preserve a way of life for grandchildren he will never know.