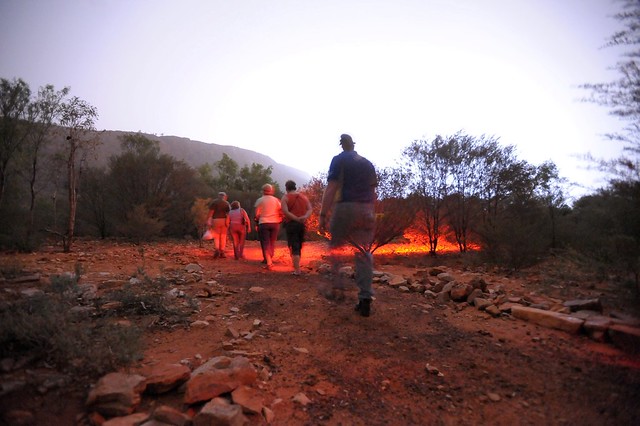 We weren’t supposed to spend the night in Alice Springs. My Grand Plan for the Outback in Australia clearly had us picking up the Britz campervan and driving to Glen Helen for a night of “roughing it.” The day before though we learned that there was a mix up and Glen Helen was fully booked by a biker gang there for a charity event (yeah, I know), leaving us in a quandary. I found myself at the front desk of the Crowne Plaza Alice Springs dirty and exhausted asking if they had any rooms available. Meanwhile, our drama was playing out on Twitter and, unbeknownst to me, someone was about to make our evening in Alice Springs an event we would never forget.

Gary Fry is the Director of the Alice Springs Desert Park and apparently follows me on Twitter. I know this because of a cryptic message I received while lounging about the Crowne Plaza asking if I still wanted to visit the Park. Another part of my Grand Plan was to have spent some time exploring Alice Springs before departing for Glen Helen, but everything took twice as long as I had hoped (including the mysteriously delayed Qantas flight) and it was almost dark by the time we got settled. It’s good to know the boss though and Gary said not to worry about it, he would arrange everything. I wasn’t sure what lay in store for us as we waited outside the hotel, but I knew it was going to be good.

Gary drove up in a Northern Territory government truck, profusely apologizing for being late. “There’s a brush fire and I was just working to put it out.” Not a bad excuse as far as excuses go, and he did indeed smell of smoke. On the way to the Desert Park I learned what he had planned for us. 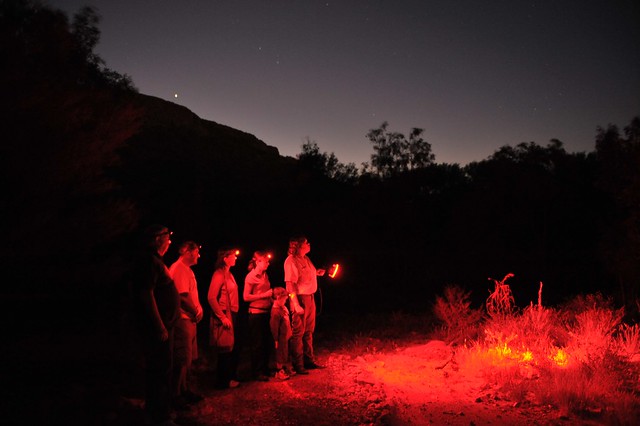 The Desert Park is a unique nature experience that showcases the flora and fauna of the central Australian desert environments on 3,212 acres of land. It offers guests the opportunity to experience the variety of the deserts of central Australia, exploring the inter-relationships between the plants, animals and people. They also have a unique nocturnal enclosure, giving visitors the chance to see many iconic Australian animals they would never see otherwise. That’s where we were headed.

The Desert Park was closed but like I said, it’s good to know the Director. Gary opened the gates and went rummaging through his office looking for headlamps so we could walk through the nocturnal exhibit.

The Nocturnal Tour takes place in the Park’s Mulga Walk, which is a free range enclosure for animals that are either extremely threatened or no longer found in the wild in central Australia, such as bilbies and brush-tailed bettongs.

Gary opened the gate and we were in, not quite sure what we would find. Almost immediately we heard a rustle and Gary swiveled around to catch whatever it was in the red light. He was as excited as we were as he identified a bilby, a cute little marsupial. I’m not sure why, but most animals endemic to Australia seem to have impossibly cute names; it’s as if Disney and a focus group of toddlers were responsible for the naming process.

For the next thirty minutes it was a parade of strange nocturnal creatures including bilbies, wallabies, bettongs and fuzzy rats (disappointed it wasn‘t called the rataby or something). Throughout we were followed by a sometimes loud and always annoying bird that wouldn’t leave us alone. He seemed oddly protective of the Walk and every few minutes would let out a loud SQUAWK letting us know he was there. Along with the sightings, which were always exciting, Gary explained what we were seeing and gave us some background on the biology of the Outback. It was fascinating as he related stories of saving various animals, some of which are the last of their species. It was a melancholy thought, but was instantly brightened once I remembered that these animals have a chance now.

Reluctantly we left the enclosure and bid our good byes to Gary. Walking around the Mulga Walk at night with all the nocturnal creatures was one of the best and most unique animal experiences I’ve ever done, and I can’t thank Gary and the Desert Park enough for making it happen. For only $20, every visitor to Alice Springs should take the time to experience this unique way of learning about the real Australian Outback.