It’s not for everyone, but a region’s alcoholic specialty can many times define the destination. Not only do they taste great (hopefully) but if you don’t have too many of them, these signature drinks can provide great memories of your trip. Here are some of my favorite iconic potent potables.

Tequila – A fermented beverage using the blue agave plant has been popular in Mexico since the time of the Aztecs. Soon after arriving in the New World, the Spanish began making their own beverage, which became the tequila we know and love (or fear) today. Mexican law states that tequila can be produced only in the state of Jalisco and limited regions in the states of Guanajuato, Michoacán, Nayarit, and Tamaulipas. Mexico has also claimed the exclusive international right to the word “tequila.”

I used to really hate tequila until I went through a professional tasting while visiting the Tres Rios Resort in Mexico. We were given a small glass of tequila and told to swirl it around the glass. As with wine, we were trying to determine its viscosity, or resistance to flow; is it thick or thin. Next we sniffed the tequila, trying to detect the faint notes of citrus, wood or even vanilla. Finally, after what seemed like an eternity, we were allowed to drink. I slowly swirled some air across my tongue, just as if I were at a winery, to aerate the tequila and create an explosion of flavor. I’m still cautious around tequila, but the tasting gave me a greater appreciation for its history and importance in Mexico.

Singapore Sling – Yes, it’s true this may have more importance to tourists than anyone else, but there’s no way I could ignore the classic drink, the Singapore Sling.  The Singapore Sling was invented by Ngiam Tong Boon sometime early in the 20th Century at the iconic Singapore hotel, Raffles. Although there are many variations, the original recipe included gin, Cherry Heering, Bénédictine, and fresh pineapple juice.

A trip to Raffles is a must for any traveler in Singapore. It is cliché, but you really do step back in time as soon as you enter the property. The buildings are gorgeous and every detail is British Colonial design at its finest. The Long Bar is no exception, with dozens of palm fans and dark wood furniture creating the perfect tropical vibe. You expect to see a British officer replete with pith helmet parade by at any moment. Ordering the Singapore Sling at the Long Bar is about much more than the concoction itself. It’s about sitting in 19th Singapore at its finest, eating some peanuts, sipping your incredibly expensive drink (S$30)  and watching the people saunter past. 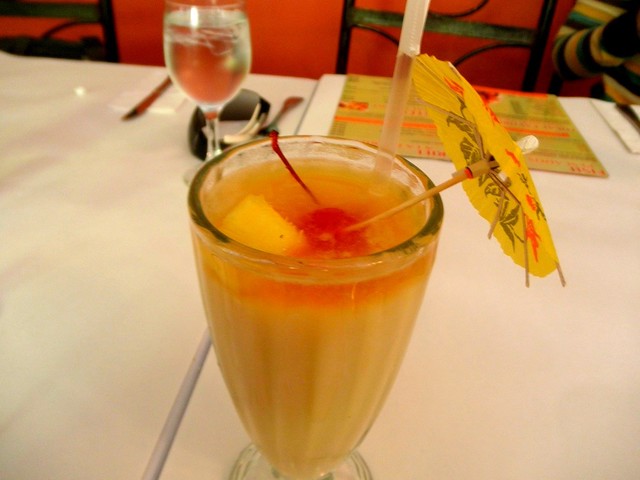 Pina Colada – As with so many famous dishes and drinks, there is some confusion as to who actually created the original pina colada. Some sources say it was created in the 1950s at the Caribe Hilton’s Beachcomber Bar in San Juan while Barrachina, a restaurant in San Juan, claims to have invented this tropical delight in the early 1960s. Regardless of who actually first mixed it, there’s no question that it’s a thoroughly Puerto Rican concoction that for many exemplifies the Caribbean lifestyle. Pina coladas are made by mixing coconut cream, pineapple juice and white rum in a blender until smooth and is then served with a pineapple wedge and a maraschino cherry.

I’ve had pina coladas many times, but it was only recently that I enjoyed the chilly treat at one of the self-proclaimed originators, Barrachina restaurant in Old San Juan. There really wasn’t a question if I wanted one or not, guests usually can’t leave without sampling this favorite drink. The Caribbean classic was served in a large, chilled glass and was an impressive sight to behold. True to their word, it was also one of the best pina coladas I’ve ever enjoyed. Do yourself a favor if you’re ever in San Juan, be sure to stop by Barrachina’s for an afternoon refresher.

What are some of your favorite drinks from your travels?