One of the nice things about having someone else plan a travel itinerary for you is that a lot of the stress goes away. One of the downsides I learned though is that I personally don’t do as much trip prep as I should, especially when it comes to the fine details. Such was the case as I entered the Siq leading to the ancient city of Petra, on a trip coordinated by the Jordan Tourism Board.

It was hot, early and dusty as we walked down the kilometer long, slot canyon entrance to the ancient Nabatean city of Petra. Like most people, my knowledge of this once great city prior to my trip was pretty much limited to its cameo in Indiana Jones and the Last Crusade. The one thing that stuck with me though was some advice from a colleague, “Make sure you see the Monastery.”

It seemed like a easy bit of advice to adopt, and I casually mentioned it to my guide who stopped and stared at me in response. “Ok, we can do that,” he started, “but we have to get moving.” I didn’t know it at the time, but I had just added a lot more time to our Petra visit.

Petra was far more amazing than I could have ever imagined. Comprising so much more than just the iconic Treasury building, the city is spread out across several kilometers, the remnants of the once vibrant trading city found throughout the daunting cliffs. After a couple of hours exploring the nooks and crannies of ancient burial places and Roman ruins, we came to what looked like a logical stopping area. For us though, it was only the midway point.

What followed next was our trek to see the Monastery, which lay perched high above us at the end of a long and winding ascent. At first the hike was fine, we climbed the natural stairs at a good rate, not too fast or slow, but consistently moving forward. For a while. Gradually the steep climb and the heat started to get to me and I had to take more and more breaks. Then I had to rest for a few minutes. Then I threatened my guide with tourist abuse. Then I thought about faking a heart attack in order to get airlifted out of there, an act that would be pretty close to real life. 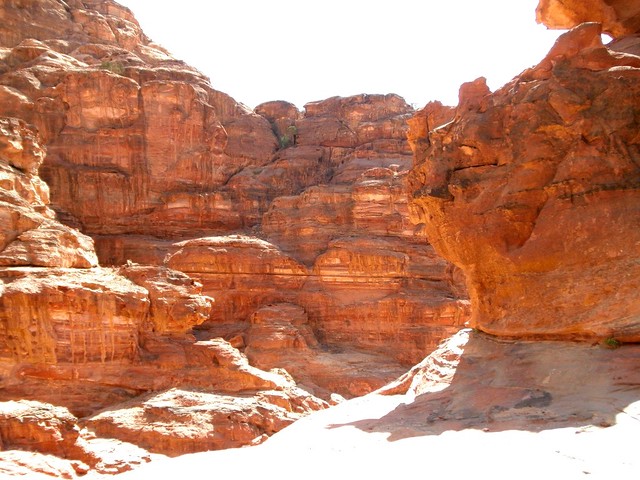 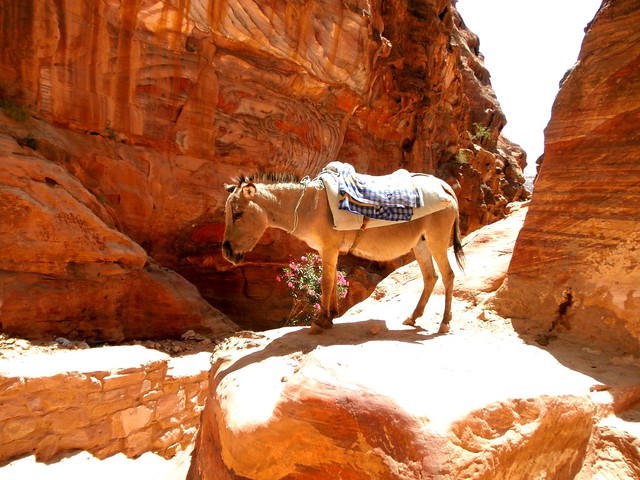 I know I’m not in the best shape, I get that. But this was a hell of a climb, one that I wasn’t expecting. I also wasn’t expecting how beautiful that it would be as we passed by the strange rock formations in an ever changing array of colors. Every now and then some Bedouin kids darted past us, snickering at my huffing and puffing. It was still earlyish in the day and the massive hoards of tourists were still poking around the Treasury, leaving the Monastery route all to us.

Eventually, after what seemed like an eternity, we arrived and nearly collapsed, hot and sweaty from the climb. But I at once knew all the near heart attack pain had been worth it and that the advice I was given was not in fact a bad joke. 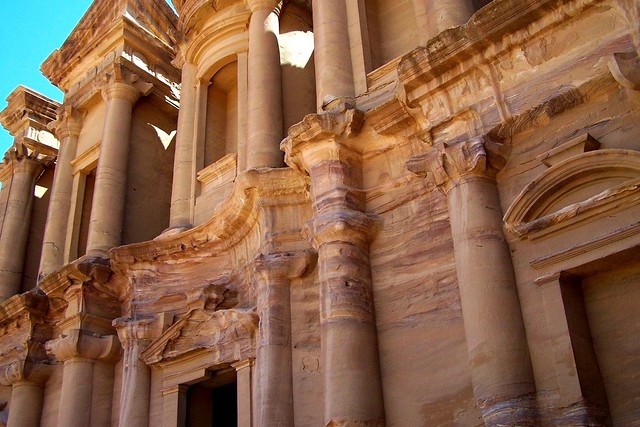 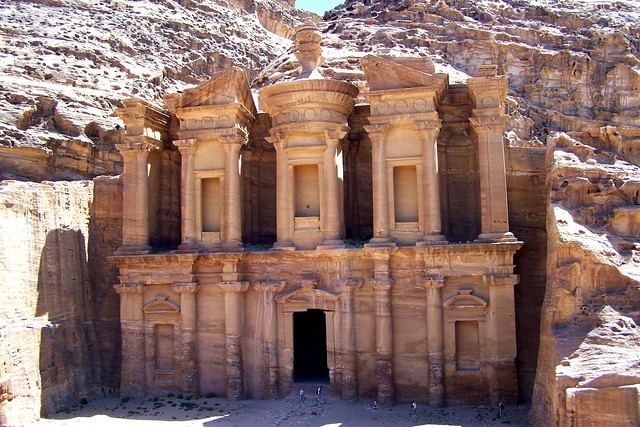 The massive walls of the Monastery, Petra’s largest monument, soared high above us as I walked up to the building. There were only two other people there as I peered inside the ancient structure, originally built in the 1st century BCE. After gaping at the monument, I joined my guide at the conveniently located café across from the Monastery for a rest and a water. Several waters actually.

I’m sure younger, fitter people will scoff at my description, but it really wasn’t an easy hike. But unlike so many other hikes I’ve been on, not only was it worth the effort (which it absolutely was) it helped define my Petra experience. Unlike its flashy cousin, the Treasury, the Monastery is quiet and austere, yet much more impressive than the Indiana Jones star. Sitting there quietly gazing across past the building as the local Bedouin drove their goats along the way, it hit me that far from being a dead city, Petra is very much alive.

6 thoughts on “Hidden Treasure of Petra – The Monastery Trail”