I spent a week traipsing around the North and South Islands of New Zealand, thanks to New Zealand Tourism. It seemed the country could do no wrong, I loved every minute of my trip and was already planning a return visit. Maybe I was too lucky, maybe everything had gone too well and the Queenstown disaster was a cosmic necessity to balance out the truly outstanding trip.

Queenstown is a popular, very popular actually, tourist town that is best known for its winter sports. Kiwis and Aussies descend on this mountain town in droves to hit the slopes and experience the best that winter has to offer. That was part of the problem I suppose, even though it was winter the first snow had yet to fall and the town was nervous.

While Queenstown is a physically lovely town in any season, and there are plenty of activities in the summer, the lifeblood of the town is the winter. That’s why there was a undercurrent of apprehension, without the snow businesses were losing money every day. The visitors didn’t know what to do either. Walking around town were scores of twenty-something snowboarders, usually bored and usually drunk or high. It was a diaspora of annoying, intoxicated teens with nothing to do but buy more ridiculous hats in the shape of animals.

I however had an itinerary, a schedule that would guarantee activity in the snow deficient village. Sort of. I was to partake in one of the great New Zealand pastimes, flinging oneself off of high structures. I don’t know why Kiwis like this so much, but they are particularly good at it. Not wanting to be left out, I ascended the Gondola Hill ski lift for the first flinging activity, forest zip lines.

My first zip lining experience had been just a month earlier, and I was nervous. At Grouse mountain in Vancouver, the flying fox was a harsh, violent activity. I soon learned at ZipTrek Ecotours though that zip lining could actually be fun.

What came next was two hours of fun as we flew through the trees on the slopes of Gondola Hill. Not only was it an adrenaline rush, but the views of Queenstown and the nearby lake and mountains were amazing. Of course the guide mentioned a few hundred times that it hadn’t snowed yet. Clearly it was a town obsessed.

After a successful morning of zip lining, I felt reinvigorated. Maybe Queenstown wasn’t so bad. Next on the itinerary was something I had been looking forward to all trip, an activity for which New Zealand is famous and that would test the limits of my fear of heights – bungy jumping.

I’m not sure what happened, but the staff at AJ Hackett didn’t have my reservation and weren’t able to accommodate me that morning. I probably could have pushed, but I think I was looking for an easy way out. I was really nervous about bungy jumping and the ledge jump at Queenstown didn’t look all that great. The jump is alongside a cliff face into the woods below. If I’m going to jump off an impossibly high ledge, I want some water to be involved. So it was with mixed feelings that I left the mountain and took the lift down back to the ski town. 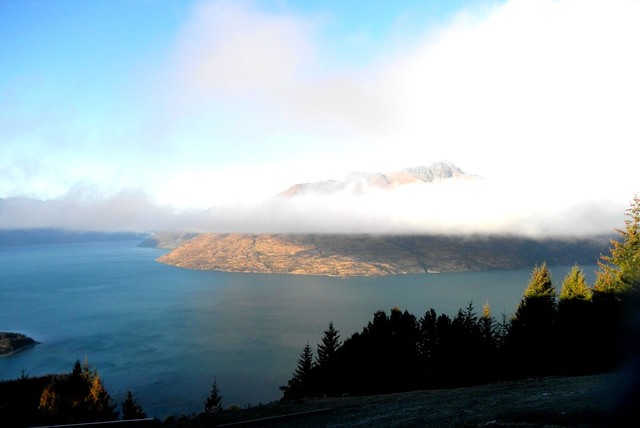 It was noon, I had only done one thing and my flight was due to leave in a few hours. My agenda said that I was next supposed to visit a well known local eatery, Fergburger. I love good burgers and was looking forward to it, until I saw the line. All of those drugged up snowboarders apparently had the munchies, the line was out the restaurant and along the block. I was frustrated with the bungy and the lack of anything great to do in the town and decided to skip it. In a move of travel frustration, I instead found a seat at the nearest McDonald’s so I could use their free WiFi. Yeah, I know.

And so I left Queenstown feeling down for the first time since landing on the island nation. Reflecting back on the experience, I wasn’t prepared for Queenstown. I was disorganized and felt lost throughout the day. I wandered without knowing what I was looking for. My previous days exploring New Zealand had been extraordinary and I think I took it for granted that things would just be spectacular wherever I went. But they weren’t and that’s ok.

There are always going to be parts of any trip that just aren’t great, and that’s fine. We can’t love everything equally, there will always be highs and lows. I’m sure I’ll get plenty of comments extolling the greatness of Queenstown, which is fine. It’s just not for me.

20 thoughts on “Queenstown, You Let Me Down”