Our first introduction to Australia came at the end of a fifteen hour flight to Sydney. Our Australian schedule was a busy one and we only had two days to spend exploring this great harbor town. I knew it wouldn’t be enough time, but I also knew if we planned it right we’d get a good feel for the city. Here’s my recommendations for spending 48 hours in Sydney to make the most of your time and get to know the city a little better.

After a relaxing breakfast, walk over to Circular Quay for an instant introduction to life in Sydney. When I first approached this iconic area I was stunned. I had seen photos of the Sydney Opera House and Sydney Harbour, but I was actually there. It was like living in a postcard. Walking around the quay offered amazing views of the massive opera house, the busy harbor and the Sydney Harbour Bridge. This is a great place to stroll just admiring the sights and hopefully the weather. After soaking in the sights and smells of the harbor, walk over to the Sydney Opera House to learn more about one of the most famous buildings in the world.

Visitors can wander around the Opera House without charge, admiring this famous stunning example of mid-century architecture up close. But for the ultimate experience, take the one-hour Opera House Tour. The tour runs every 30 minutes and is led by docents whose knowledge of the Opera House is matched only by their passion for the edifice.

The tour is one of the best I’ve ever taken and I didn’t just learn about the strange history of the Opera House, I gained a whole new appreciation for the role it plays in daily life in Sydney. Much more than just a pretty face, the Opera House is a dynamic institution.

After enjoying a leisurely lunch at one of the many restaurants in the Rocks area, it’s time to get on the water to experience Sydney the way it’s meant to be experienced. I love boat tours of new cities, I gain a unique perspective that’s impossible to find any other way. It doesn’t hurt that they’re a lot of fun either.

In Sydney there are several options, but I recommend the Captain Cook Cruises. They have a variety of cruise options, but one of their most popular is the afternoon coffee cruise. For two hours guests cruise around Sydney Harbour, learning about the sights from a knowledgeable guide. Coffee and snacks are included in the cost of the trip and are offered at the half way point.

We passed by a variety of high end homes, beaches, World War II defenses and finally the two heads of the harbour that serve as its natural end and beyond which lies the ocean.

On the way back, I put down the camera (mostly) and just sat back and enjoyed the views. Boat cruises aren’t only a great way to explore a new city, they’re one of the nicest experiences in the world. There is nothing as relaxing and innately pleasing as bobbing along on the water. 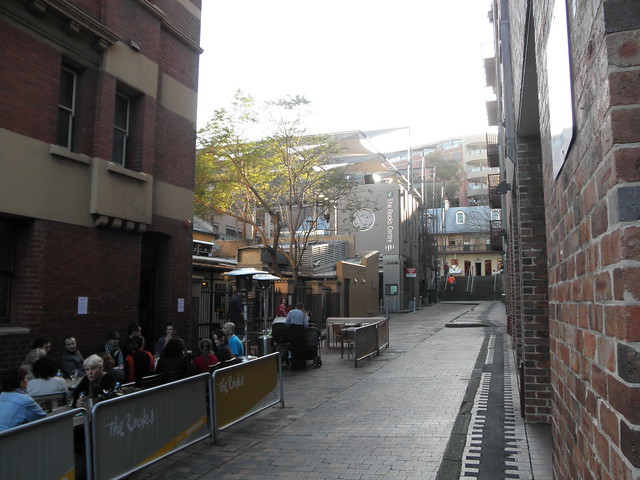 I am a firm believer in the value of a good tour guide, but I also like to find unique tours instead of the mega-coach style death march of tourists you see so often. To round out your first day in Sydney, and to get a unique and fun history lesson, the Rocks Ghost Tour is a must.

The Rocks district of Sydney is the oldest part of town, home to the First Fleet and the original settlers of Australia. Because of that history, and because of the characters sent to Australia, there are many spooky legends associated with the Rocks. The tour begins after dark near Circular Quay and guests are led throughout the narrow streets and alleyways of the Rocks, learning about the more nefarious side of Sydney history along the way. This is a fun activity for just about anyone and offers a history lesson you won’t find anywhere else.

After the tour, head back to Circular Quay for some Indian food at India Quay, located immediately in front of the ferry slips. For its location it’s well priced , the service is quick and the food is great. If you have a sweet tooth, stop at any of the several gelato stands along the Quay and stroll along the promenade enjoying the cool breezes and amazing nighttime views of the Harbour Bridge and Opera House.

When I started planning my trip to Sydney, there was one activity everyone said I just had to do – the Sydney Harbour Bridge Climb. Although it’s a bit pricey ($200), the cost is well worth the once in a lifetime experience. If you find yourself in Sydney, don’t leave without making the climb.

Completed in 1932, the Sydney Harbour Bridge is the world’s widest long-span bridge, the fifth longest spanning-arch bridge and the tallest steel arch bridge. The BridgeClimb is a relative newcomer in the life of the bridge, first offering its unique tours in 1998. To make the most of your day, be sure to schedule an early morning climb. The entire experience takes around 3 ½ hours and can easily take time away from doing other things.

The climb itself isn’t as scary or intense as I thought it would be. It’s actually a nice walk up to the top of the bridge and back down, with commentary from the climb leader about the history of the bridge.

After proving your mettle on the bridge, stop along at any of the pubs on George Street for a much needed lunch. While the climb didn’t seem exhausting at the time, afterwards I could definitely feel the fatigue.

After lunch you have a lot of options, but you can’t choose all of them. There are several great museums in and around downtown Sydney that are the perfect way to balance out your morning of death defying feats. 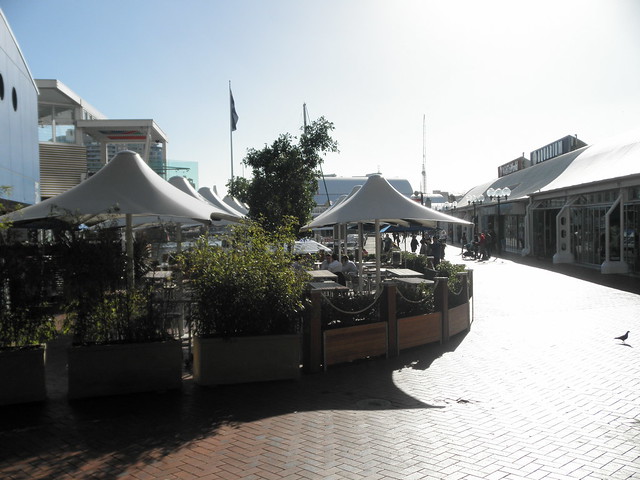 Sydney Aquarium – I love visiting zoos and aquariums, so we couldn’t pass up the opportunity to check out Sydney’s aquarium. Although dated in a few areas, the aquarium is well done and offers a wide variety of animals to amuse adults and certainly children. My favorite exhibit featured dugongs, the Pacific version of the manatee. These graceful and undeniably cute sea cows are always amusing and great fun to watch. The Aquarium is located in the Darling Harbor area, a fun place to explore after visiting the Aquarium.

Justice & Police Museum – Housed in a historic 19th century police and court building, I really wanted this museum to be better than it was. It started out with great promise, the first exhibit details the history of the Australian intelligence service, with all of its many issues. It was a fascinating look at espionage in Australia, something I didn’t realize existed. But the rest of the museum was all downhill from there. Oddly arranged exhibit rooms about seemingly unconnected cases and trials. Rather than give an actual history of the legal process in Australia, it’s just a morbid collection of artifacts and stories about old cases.

Since you only have a couple of days, location is vital when choosing a hotel. There are a number of great hotels around the Circular Quay area including the Four Seasons, Marriott and InterContinental. We stayed at the exceptionally well located Holiday Inn Old Sydney, in the heart of The Rocks district. The hotel is light and airy and offers free wifi in the lobby lounge area. The rooms are a little dated, but comfortable and some offer amazing views of the Harbour and Opera House. The real benefit here is the location. It’s a two-minute walk from the hotel to the Circular Quay, home to many of the most popular tourist activities, and its location in The Rocks gives visitors a wide selection of dining options. It really is the perfect location.

Sydney is a fun, vibrant city that really is at the heart of the Australian experience. Although weeks could be spent exploring the nooks and crannies of the metropolis, with a little planning two days is enough for a great introduction into this harbor town.