A couple of months ago I wrote about the New 7 Wonders of Nature competition that is currently underway. The effort follows on the heels of the New 7 Wonders project that, while somewhat flawed, was very successful. One can argue about having a voting contest as the means of determining the wonders, but regardless the project does shine a bright light on certain areas of the world that need it. Anything that encourages people to travel and governments to work harder at conversation is good in my book. When I wrote about the project, I listed my choices for the top seven:

Some of these I’ve visited, some I haven’t. When I wrote the original article, I hadn’t yet been to Uluru so I really couldn’t write a convincing argument in favor of its consideration. Now that I have, I’m pleased to explain why I think everyone should vote for Uluru as one of the New 7 Natural Wonders.

All of the 28 finalists are nice, there’s no doubt. They are some of the most beautiful and unique natural sites on the planet, that’s why they’re finalists. So when choosing the top seven, one has to move beyond how pretty they are. Instead one must include additional factors in the wonder equation, there has to be something more to them. Out of all of the finalists, few have as much of this X-Factor as does Uluru.

As we drove the many long, dusty hours to reach the massive rock in the desert, it amazed me just how remote it is and how many people make that same trip just to see it. What was the draw? Well, the draw for modern day tourists is the same that made it a sacred place for the indigenous peoples, it’s just so out of place.

The desert surrounding Uluru is huge and flat. There’s nothing beyond some grasses, red earth and a few hundred thousand kangaroos. Then, as if it had been placed there by the gods, stands the massive rock structure of Uluru. And that’s how the wonder of the rock begins, just as it must have for the native peoples of the region thousands of years ago.

Measured at 3.6km long and 2.4km wide, Uluru stands at the height of 348 meters above the plains. It is made from a single piece of sandstone, which extends 5km beneath the desert surface. Uluru is also well known for its considerable Aboriginal cultural significance. Archeological evidence suggests that Aboriginal people have lived in the Uluru area for at least 22,000 years. Wait, stop and think about that – 22,000 years. To put this in context, in other parts of the world at the same time wooly mammoths were roaming the plains of Europe and the famous prehistoric cave paintings at Lascaux wouldn’t be completed for another five thousand years. 22,000 years is a very, very long time. 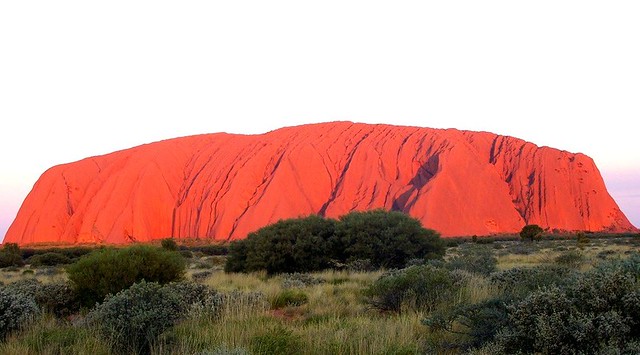 The traditional tribal owners of Uluru are the Anangu people and they believe that ancestral spirits formed these sites during the creation period. The Anangu also believe that they are the direct descendants of these ancestral beings and, as such, responsible for the protection and management of these lands. The name Uluru means “great pebble” in the Aboriginal language, certainly an apt, if not slightly conservative, description.

Tourism in the area has had a checkered past, with more harm than good being done, as is so often the case. Uluru tourism seems to be on the right path now though, with the Anangu people having a direct say in the policies and rules governing the park.

All of this points to a single fact, that Uluru is so much more than just a big rock. It is a national symbol, cultural lynchpin and sacred site. Uluru should be named one of the new seven wonders because its importance transcends the mere beauty that defines most of the other nominees. It is a truly unique natural wonder both for its physical as well as its metaphysical qualities.

What do you think? Should Uluru make the top 7? What are some of your picks for the top 7?