Sue was right on time picking me up from the Edgewater Hotel and asked if I’d bundled up enough. I hadn’t planned well for New Zealand’s South Island. Intellectually I knew that it would be winter, but for some reason I never processed that this meant it would be cold, bone chilling cold in fact. Earlier that day I drove to the closest tourist shop to buy a Merino wool hat and gloves set. I realize it was probably ridiculously overpriced, but I was in dire need. It was negative something out and I was about to spend the morning on the water.

Not only was it cold that morning in the lakeside town of Wanaka, but it was also intensely foggy. Pea soup seems remarkably clear in comparison to the dense billows of mist that had stalled over the entire town and lake. I wasn’t deterred though and anxiously awaited the Wanaka River Journeys adventure.

I love being on the water and I always seem to include it on my travels. It’s not only relaxing and inherently calming, but always guarantees a unique travel experience. Sue and her husband Brent co-own the adventure travel company, Wanaka River Journeys that offers a variety of options to see more of the Wanaka region. Their most popular offering though is their jet boat tour. 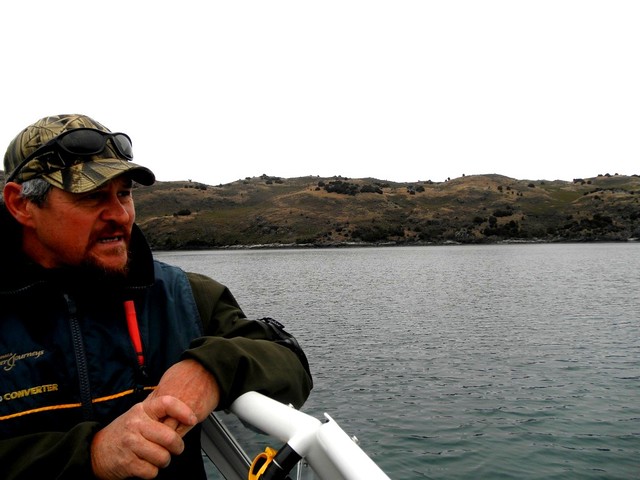 Sue and I drove over to the local marina in town where I met her business partner and husband, Brent. A hearty handshake and a slap on the back was my introduction to Brent, businessman and boat captain extraordinaire. This warm and affable man would be my guide through the lakes and rivers of the Wanaka area, and I would soon learn no one could have done it better.

A jet boat isn’t your normal boat. As the name implies, a jet boat doesn’t use a propeller, instead it moves by a jet of water ejected from the back of the craft. Jet boats were actually first developed in New Zealand for use on the shallow rivers. Because there’s no propeller, the jet boat can skim over a scant inch or two of water and reach inaccessible areas about which traditional motor boats can only dream.

In addition to my several layers of newly purchased clothes, Sue and Brent encased me in a waterproof poncho/raincoat that had me feeling a little like Gumby. I appreciated the added protection though and before I knew it, Brent and I were off to explore Lord of the Rings country. 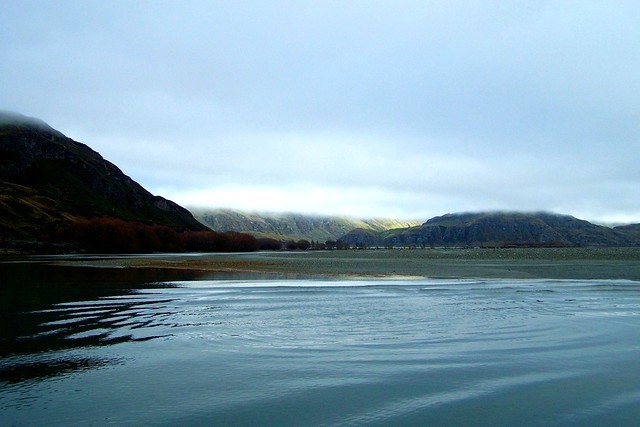 The fog hadn’t relented, it still hung over us like a thick blanket. For the first part of the journey Brent kept telling me what we should be seeing, but couldn’t actually see. He felt bad, but I didn’t mind the fog. Even mostly obscured, it was a beautiful landscape and I was just happy to be out on the water, skimming along at a dizzying pace. Brent can trace part of his family to Maori lines, and he wasted no time pointing out various islands and outcroppings and explaining their significance to the Maori who used to call the area home.

The real fun didn’t start though until we left the lake and entered the Matukituki River. A glacier fed waterway, the Matukituki is always changing its path and it takes an expert boater to be able to navigate the shifting waters. I’ve been around boating for a long time and I know an expert when I see one; Brent is as good as they get. 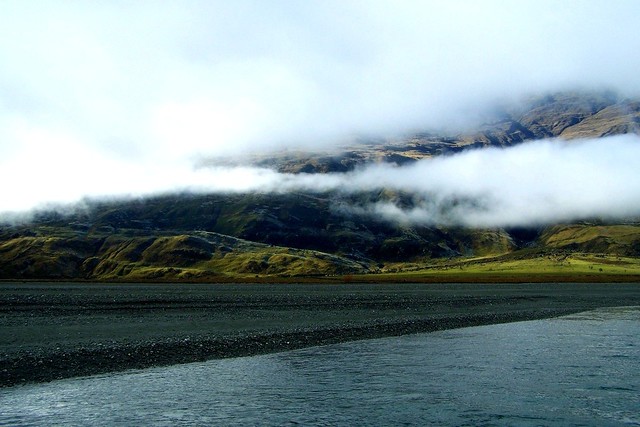 Because of the path of the river and the varying depths, Brent had to skim the boat around turns and angle the boat in every direction imaginable, even backwards, to get across without beaching. It was an exciting adrenalin rush as we raced along the waters, turning 360 degrees every now and then and scaring the crap out of some waterfowl.

On either side of the river were soaring peaks and glacial waterfalls, all creating a spectacularly serene and mystical experience. I instantly understood why Peter Jackson used this area in his Lord of Rings movies.

Midway through it was time for a very civilized coffee and snack. Brent beached the boat on a shoal and surprised me with a well stocked picnic basket. We had hot coffee, sandwiches and some of the best cookies I’ve ever consumed, no doubt the cold weather increasing my appetite. I stood there in the misty morning, hot coffee in hand looking across the river and thanking the universe for putting me in that place at that time. I couldn’t have been any happier. 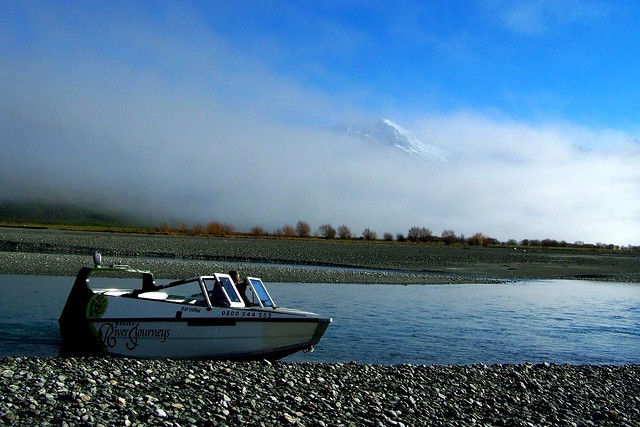 As I was finishing my second cookie, we heard some mooing. I glanced over and there was a heard of cattle wandering along the shoreline.

“Now that’s strange,” observed Brent. It’s never good when a Kiwi says something is strange, being the masters of understatement that they are it usually means it’s totally and utterly bizarre.

Turns out the cattle belonged to one of the family owned ranching stations encircling the lake area, they were just a bit lost. On a quest for grass, they thought a small patch of greenery in the sandbars was the perfect grazing point. Poor lost cows. 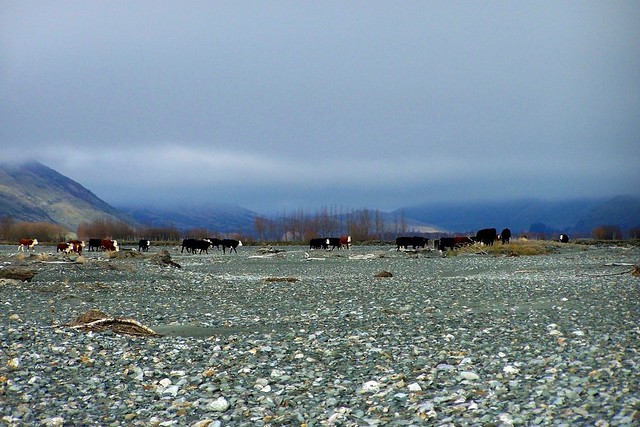 The second part of our journey upriver was just as exciting, much more so since the fog was starting to slowly burn off. At the end of the river I looked up and there it was, Mt Aspiring, New Zealand’s highest mountain outside the Aoraki/Mount Cook region. Surrounding the mountain were glaciers and escarpments, the perfect hiding spot for hobbits and elves. 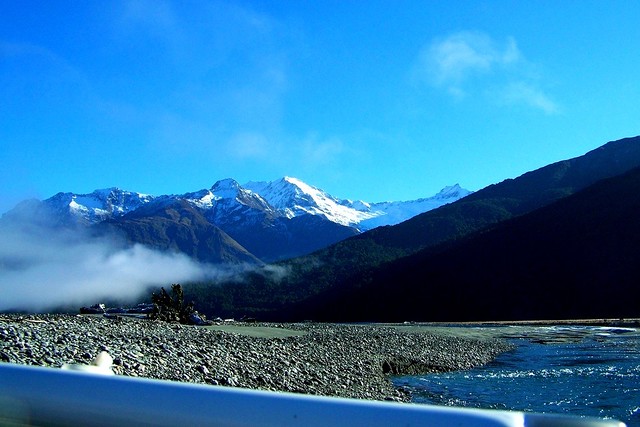 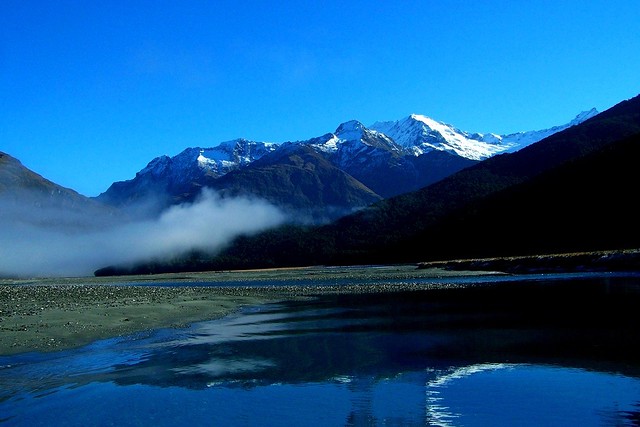 After an appropriate amount of time gawking at the spectacular beauty of the mountains, we began the skimming race back to Lake Wanaka and the promise of more coffee. More errant cows, scared birds and fog encased mountains marked the ride back to town. 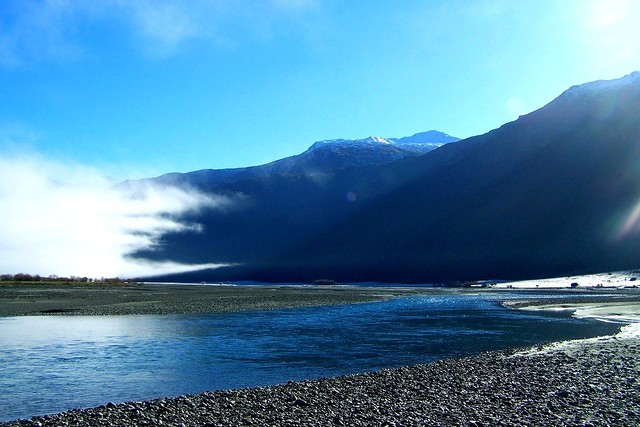 I admit it, by the time we were back on Lake Wanaka I was cold and a hot shower sounded damn good. Even though it was the middle of winter and the weather didn’t necessarily play along, the jet boat ride was one of the highlights of my trip to New Zealand and I can’t imagine the trip without my morning out with Brent. Not only should every visitor to Wanaka try the tour for themselves, they should travel to the region just for the opportunity to see Wanaka as it’s meant to be seen, on water.