It wasn’t just the lack of paved roads that scared me, it was the uncertainty of the condition of the roads on which I knew we would have to drive for several hundred kilometers before we reaching the Kings Canyon Resort, our pit stop for the night.

It happened a lot sooner than I thought it would with no advance warning. I was driving along, enjoying the calm monotony of the landscape when the road stopped and sand began. My worst fears had been realized, the off road portion wasn’t gravel or grit, it was unstable, unpredictable sand.

I drove slowly at first, very slowly. About 10 kilometers an hour to be exact. I hated the feeling of not being in control of the car and was worried about veering off into the bush. Other cars weren’t a concern, there were none, it was just us and the open road. I was scared, there may have been some yelling and a few tears, but thank God the sand didn’t last nearly as long as I feared it would. The sand turned back into paved roads until we hit the Red Centre Way, and hours of corrugated, dirt roads. 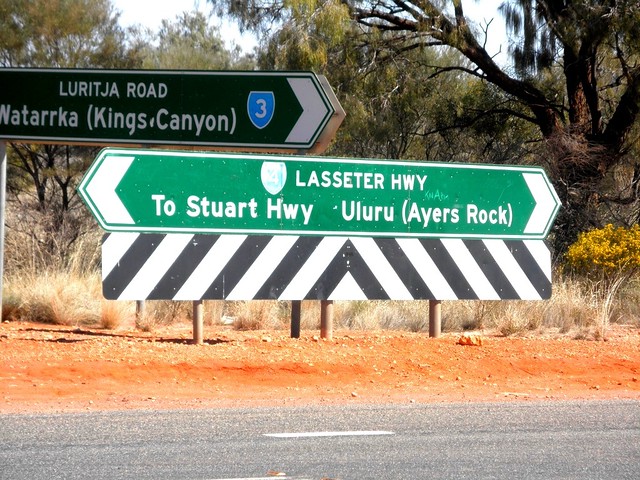 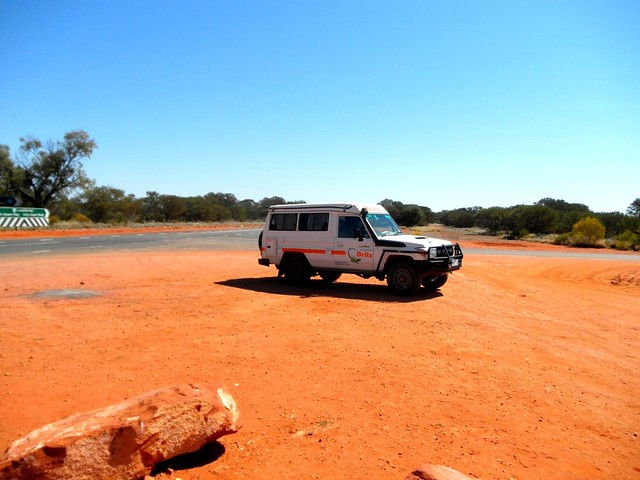 I didn’t mind the unpaved drive to Kings Canyon as much as I did the sand, but I also can’t say that it was fun. Driving along the heavily rutted dirt roads was like using a jackhammer as a car. The drive was a head shattering, tooth filling shaking experience. To give you an idea about the intense and constant pounding we took, later that night I examined the Coke cans in the cooler and found they all had hundreds of tiny dents in them, all caused from the dirt road to Kings Canyon.

When the fearsome dirt road finally ended and we were once again on paved road, I nearly cried from joy. I swore at that very moment to never take modern conveniences for granted ever again.

Luckily for us, and our fillings, the rest of the driving experience in the Red Centre was all paved, if not lengthy. We only navigated a tiny portion of the Northern Territory and still we traveled hundreds of kilometers over many hours. There were a lot of perks though. 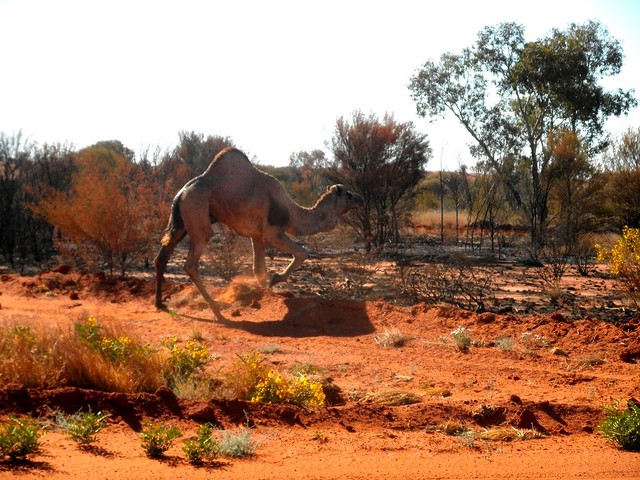 The feeling of approaching Uluru and finally catching our first glimpse of The Rock is an experience I will never forget. Spotting our first wild camel on the way to Kings Canyon. Stopping at roadhouses along the way for some refreshments and local color. But the one moment that meant the most happened as we were leaving Ayers Rock.

It was early, about an hour before dawn when we left the Desert Gardens Hotel at Uluru. We had to leave early in order to make the five hour drive to Alice Springs and catch our flight to Melbourne. I was worried though, everyone everywhere constantly warned us about driving at night. The universal consensus is that no one should ever drive at night in the Outback. The reason is simple, there are a lot of animals (particularly kangaroos) and they’re almost all nocturnal. Without any warning a roo or other unusual animal with a cute name could jump in front of an oncoming car with unfortunate results for everything involved. We didn’t want that certainly, but we didn’t have a choice.

The sun soon rose, just as we were approaching Mt. Conner, otherwise known as Fooluru for its resemblance to Uluru, and once again I was caught off guard by the unsuspecting beauty of the desert. Then, just ahead of us we saw them, two kangaroos in the road, hopping about. I slammed on the breaks, causing the hefty bag of Tim Tams and Coke to hit me in the back of the head, and we gawked in silence. We were ecstatic, we had finally seen kangaroos in the wild, and it was even a mom and her joey. The Giant Reds hopped around, in and out of the road not really caring about us or what we were doing. For their own safety, I hoped they would hurry off into the bush, which they soon did. Then, another ten miles down the road out of the corner of my eye I noticed something, two kangaroos hoping alongside the van in the high desert grass. They were like dolphins escorting a boat from port, hopping in and out of the dense spinifex, barely visible on the down-hop.

Even with some of its annoyances, it was moments like these that made the road trip worthwhile. These were utterly unique experiences that we will carry with us forever, all thanks to pushing our travel comfort zone and exploring one of the world’s most fascinating regions all on our own. That’s the real beauty of renting a campervan in Australia, the freedom to do whatever you want whenever you want while exploring the best the world has to offer.