Part of the condition of my trip to Australia’s Red Centre was that we travel around in a Britz Campervan. The idea was to replicate the trip Andrew Evans, the world famous travel writer and digital nomad, took around the Northern Territory. Since I won the trip, I couldn’t complain, but I was definitely nervous. I felt this would push the boundaries of my travel comfort zone.

We arrived in the dusty Outback town of Alice Springs later than we had hoped. In what I would later learn is normal procedure, Qantas was inexplicably delayed leaving Sydney. I was excited to get started though and relieved that the Britz rental facility was only about ten minutes away by cab.

A New Zealand based company, Britz is also the largest campervan rental company in Australia. They offer a wide variety of rental vehicles in both countries, from cars to super-duper campervans (RVs for my fellow Americans). Pretty much, if you want to rent a campervan in either country for an extended trip, Britz is your best bet. Out of all the rental possibilities, Northern Territory Tourism had chosen for us the Britz Challenger 2 Berth 4WD campervan.

We’re not campers, outdoorsmen or similarly engaged by nature. I, personally, enjoy being outdoors and love to hike, raft, etc. But I don’t camp. I chalk it up to some particularly bad experiences as a Boy Scout involving a tarp, fire and a lot of angry people. Realizing our own limitations we decided several months in advance that we would not be sleeping in the campervan. Sorry folks, but I need a hotel room. Besides, the camping experience didn’t look all that great to me. While the romantic notion of sleeping under a full canopy of stars may be enticing, it’s also not very realistic. The reality of campervan lots and parking areas depressed me, as did the idea of not having a proper shower or toilet for five days. Needless to say the hotels won the day. But that doesn’t mean we didn’t have an authentic Britz experience, we definitely did.

The Northern Territory’s Red Centre is far away, big and quite barren. It’s a hard and demanding landscape that rewards as often as it punishes. During the rental process we were given a booklet of warnings, all of which managed to absolutely terrify me. The idea of running out of gas was particularly frightening. Before we could get stranded though, we would have to leave the Britz parking lot, a surprisingly difficult feat. 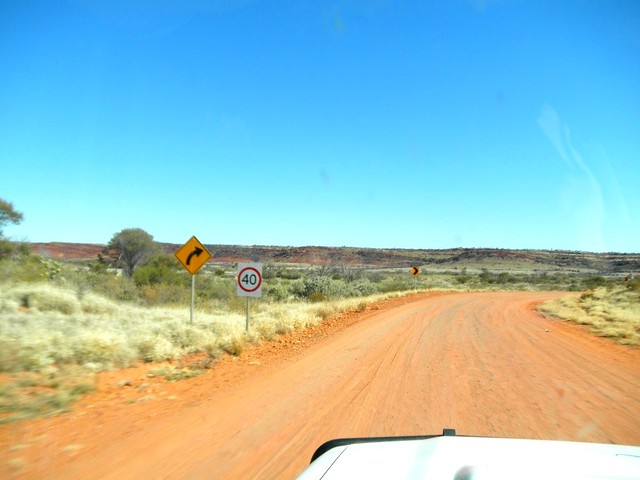 I hadn’t driven a stick shift since 2000, a fact which really should have dawned on me well before the moment I found myself on the WRONG side of the car, trying to remember where the clutch was and what its purpose was exactly. For about ten minutes, we drove in poorly designed circles in the Britz parking lot, drawing a smallish crowd of admirers (I choose to believe they were admirers) as we repeatedly stalled and narrowly avoided ramming the other vans. Driving a stick shift again was hard enough, but putting it on the left hand side was just mean. Scott’s face had turned a strange shade of white as I decided enough was enough, and pulled out into the street.

Spending a few hours in Alice Springs greatly improved my driving abilities, although I would maintain a bad habit of driving in the wrong gear for the duration of our adventure. The smell of burning rubber will always bring back fond memories of Australia. Finally it was time to hit the big road, we stopped by the grocery for provisions and embarked on the start of a 1,200 kilometer journey through Australia’s Red Centre.

As a side note, you may be curious to learn how we provisioned ourselves for the Outback. Before leaving Sydney, we stopped by the L’Occitane store and equipped ourselves with enough unguents to personally cleanse every kangaroo in the country. At the grocery it was more base essentials: Coke, Diet Coke, Chicken in a Biscuit, croissants, Tim Tams and Cheetos. Obviously we are hard core adventurists; I have no doubt the Mongol Rally is in our future.

Over the course of five days we had two major stops in addition to Alice Springs: Kings Canyon and Uluru (Ayers Rock). There was supposed to have been a third, but the day before our arrival we learned that the Glen Helen Hotel and Campground had been ‘taken over’ by a group of several hundred bikers there for a charity event. Did I mention the Red Centre isn’t exactly a normal place? 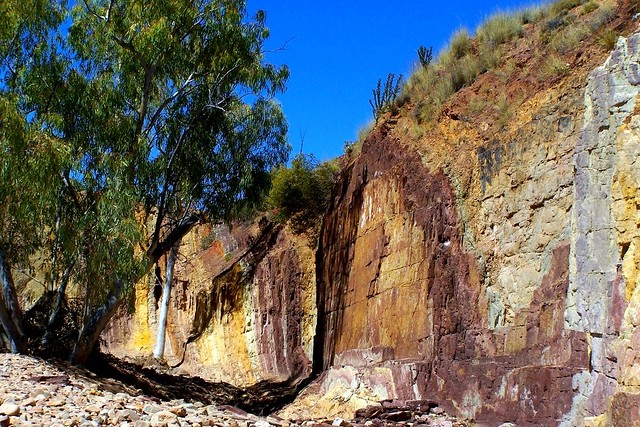 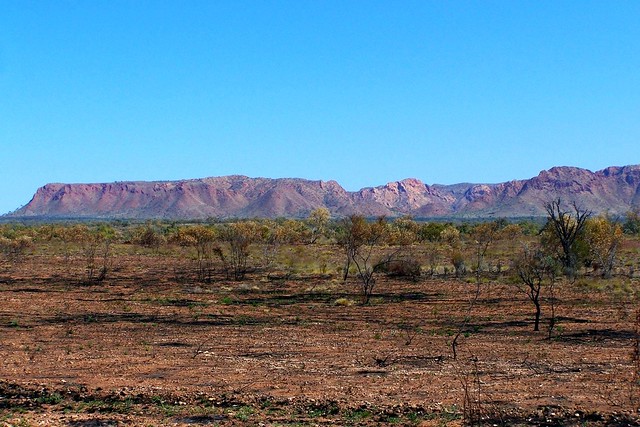 We had a GPS unit in our van, but I soon realized that it was a joke. The device worked just fine, but the Red Centre isn’t a place for GPS, this is map country pure and simple. We opted to take the Namatjira Drive for the scenery; it would take a little longer, but I thought would be a more enjoyable drive, which it was. We stopped at the Aboriginal Red Ochre Pits, drove past Glen Helen and admired the MacDonnell Ranges following alongside. In the back of my head though was a nagging thought – at some point we would run out of paved roads.