I don’t like heights. Well, not at all heights. My phobia is unpredictable and usually irrational; I have no problem flying, but a three foot ladder makes my legs wobble. That’s why I wasn’t sure if I could actually tackle the Sydney Harbour Bridge Climb.

Before leaving for Australia, I solicited a lot of advice from friends and family about what we should do in Sydney. The first thing most people said was that we just HAD to do the Bridge Climb experience. Based on the feedback and the fact that we aren’t likely to return to Sydney anytime soon, we decided to take the plunge. (pardon the poor choice of words)

Sydney is one of the great cities of the world and the fact that almost 25% of  all Australians call it home means they must be doing something right. It also enjoys massive global recognition, due in large part to its landmarks, most notably the Opera House and the Sydney Harbour Bridge.

Completed in 1932, the Sydney Harbour Bridge is the world’s widest long-span bridge, the fifth longest spanning-arch bridge and the tallest steel arch bridge. Until a certain opera house was constructed, it was the icon for the city and remains an important part of daily life both figuratively and literally. The BridgeClimb is a relative newcomer in the life of the bridge, first offering its unique tours in 1998. 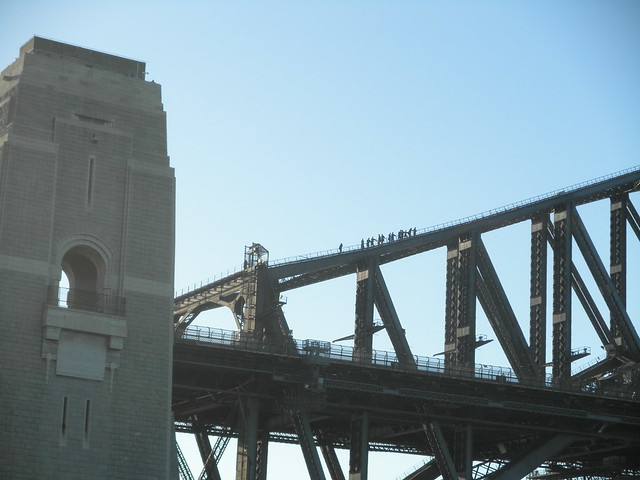 The climb is extremely popular, so advanced bookings are a must. We were scheduled for a 9:30 am climb, and nervously approached the bridge for our turn at ascending the mighty steel structure.

Safety is paramount and the BridgeClimb staff take no chances. We were processed in to the climb experience in a manner not unlike what astronauts must endure including briefings, breathalyzer tests and equipping everyone for the climb. Everyone was given a sexless, futuristic jump suit to wear, the kind you see in sci-fi movies. We were also instructed to remove all jewelry and anything that could fall to the six lanes of traffic spanning the bridge. Then our guide gave us our static line attachment device and we practiced a bit before embarking on the climb itself.

The BridgeClimb employs a unique system of making sure no one actually falls (or leaps) off of the bridge during the tour. At the start of the climb, everyone hooks into a static line system that spans the entire tour, making it practically impossible for anyone to deviate from the path. My thumping heart was beginning to relax a bit.

It was a calm and clear winter’s morning, the temperatures were cool but not cold and the sky was absolutely clear. I was relieved since BridgeClimbs happen no matter the weather and climbing through a rain storm did not appeal to me. 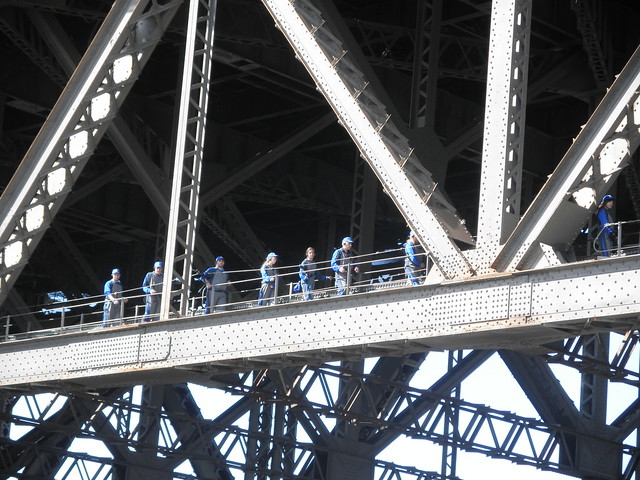 Walking single file, we walked through the base of the bridge and climbed up steel ladders alongside the massive bridge pylons. Along the way our guide gave us more information about the history of the bridge through our headsets. Before I knew it we were already at the base of the mighty arch, walking the gentle slope upward. As someone who is afraid of heights, I really should have been scared, but I wasn’t. I don’t know if it was all of the safety precautions of just the massive size of the bridge itself, but I never got scared. There was never a moment of feeling suspended over space, which I think is key. Sure, we could see the cars speeding through the bridge below us, but it never concerned me. Instead I was focused on climbing the arch to the apex of the magnificent bridge.

Finally, the entire group had made it to the top, some huffing and puffing, other fitter participants taking it all in stride. We were the first group of the day and had some extra time at the top to admire the views, something for which I was thankful. Turning around I could see everything, from the distant shipyards of Botany Bay to the much closer Opera House. It was a wonderful moment of peace and contentment as we all admired one of the world’s great cities. 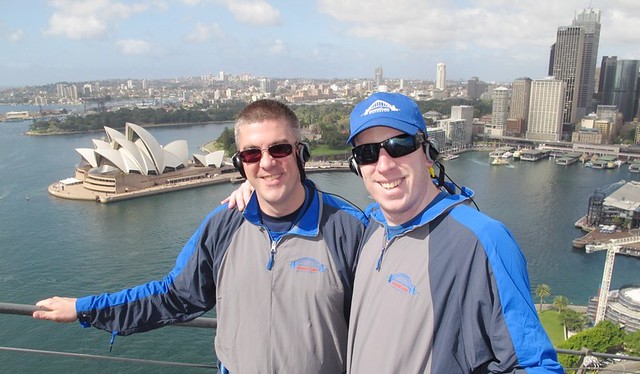 Adhering to the laws of physics, after a few minutes we too had to come down and started the not-as-much-fun climb down back to the base of the bridge. It was more melancholy because we all knew that the experience was coming to a close, and each of us desperately wanted to hang on to those feelings of freedom and joy we felt at the top of the bridge. By the end though, my legs were turning to Jello and I was eager for a chair and a Diet Coke.

I understood almost immediately why everyone insisted we had to make the BridgeClimb. We’ve been to a lot of places and have done a lot of cool activities, but nothing was quite like the BridgeClimb. It truly is one of the most unique and iconic experiences I’ve found anywhere in the world. It may be pricey at $200 per person, but the expense is well worth it. As I wrote about in Do This, Not That – Travel Edition, certain experiences are worth the cost and they define the reason why one travels in the first place. While it’s possible to visit Sydney and not experience the BridgeClimb, I really don’t recommend it.

Have you been on the Bridge Climb? What did you think?