One of the most important aspects of any trip is the food. We all have to eat, and exploring a new culture through its culinary traditions is one of the best ways to learn about a new place. But let’s face it, not everything is good and without a doubt I have stumbled plenty of times trying to find something to eat while traveling. Through all of my culinary missteps though, four stand out as meals I really regret eating.

Loco Moco – In its basic form, the Hawaiian classic loco moco consists of white rice topped with a hamburger patty, a fried egg, and brown gravy. The dish was created at a restaurant in Hilo at the request of some teens who didn’t have enough money for a full meal. Like many Hawaiian meals though, variations of this home food favorite probably existed long before it was officially named at the grill. The name itself really doesn’t mean anything and was dubbed loco moco on a lark. Today though it is one of the most popular meals in the islands.

I knew I had to try it at some point, and a late evening meal seemed the perfect opportunity. While not the most appetizing dish in appearance, I have to admit that it tasted pretty good. The problem wasn’t in the presentation or taste, it was the aftereffects. I was sick for a day after eating what is arguably one of the heaviest meals I’ve ever encountered. This definitely isn’t for those with a weak stomach or who haven’t been fasting for a few days.

Roasted Duck – We were walking through Melbourne’s Chinatown looking for a suitable spot for dinner when we passed a restaurant window featuring dozens of delicious, golden brown roasted meats. As soon as we saw the delicious meats glistening in the case we knew our decision had been made. Without hesitation I ordered the roasted duck and waited eagerly as the cook prepared my portion.

Even on the plate it looked delicious, but that’s where it stopped. I’ve had duck many times before and loved it, but not this time. The first clue were the bones, which wouldn’t have been a problem if the accompanying meat wasn’t so bad. The entire portion was fatty and disgusting. After a couple bites of navigating around small bones and huge globs of fat, I was done. I couldn’t finish it and we soon left. I’m sure roasted duck purists will tell me that I’m an idiot, that this is not an unusual experience, but I just didn’t like it.

Seafood – I’ve tried, I really have. Every time I see someone drool at the mere mention of lobster or smoked salmon, I get jealous. What is it about aquatic delicacies that gets everyone so excited? I have memories as a child trying seafood, and hating it. Most people grow out of it, but I did not. I try every few years, usually while traveling, just in case: white fish, lobster, crab, you name it, I’ve probably tried a nibble. I guess it’s genetic, but even the smallest morsel of seafood makes me nauseous. I hate everything about it, the taste, smell and texture. I envy all of you who can sit at a fine dining restaurant and not be worried about the inevitable fishy dishes, but it’s just not for me and I have so far regretted every attempt to force myself to like it. 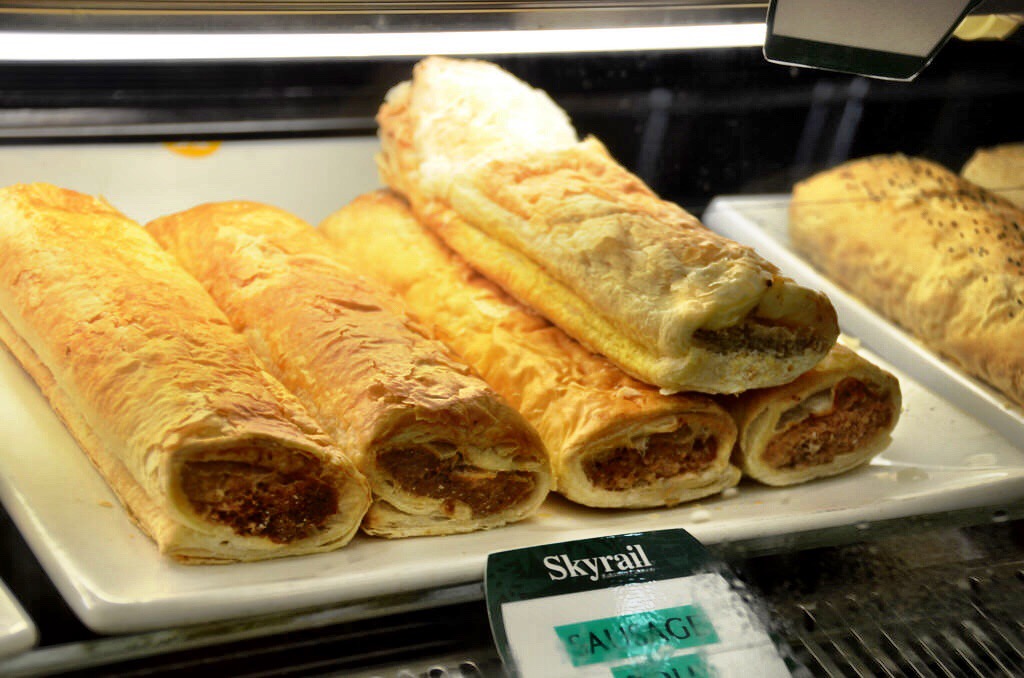 Sausage Rolls – Found in England, Scotland, New Zealand, Australia and any destination where dubious British dining has taken root, the sausage roll is not the proudest of culinary traditions. The dish is simple, puff pastry is wrapped around a sausage-like meat composition and baked. I know I’m stepping on some toes here, but I really don’t think I like them, which is weird. It’s weird because based on the facts, I should love sausage rolls, they should be a favorite food. But my problem is the mystery meat at the middle of this popular take-away, convenience store delicacy. It’s not a sausage, not in the classic sense. It’s meat, that much is certain, but it’s more like a sausage mixture than a properly cased wurst of some sort. Maybe it’s a terminology issue, but it wasn’t what I was expecting and while I can eat them, I usually choose not to.

Are there any foods you regret eating on your travels?