Even though it was April, it was still chilly as we left the train station and headed into the center of Salzburg. We were only there for the day, en route between Munich and Vienna. Since I have watched “The Sound of Music” more times than I care to admit, I just couldn’t pass up the opportunity to tour this classic Austrian town.

We walked through the medieval Old Town of Salzburg, barely glancing at the shops lining the way, intent on reaching our first objective of the day – the Festung Hohensalzburg Fortress. I love the German language for its ability to create names as impressive and foreboding as Festung Hohensalzburg. Salzburg is set on the edge of the Alps and the Fortress sits high atop a mountain overlooking the town. Impossibly hard to comprehend is its age; Hohensalzburg dates back to the 11th century and served as the home for the powerful Archbishops of Salzburg well into the 19th century.

We rode the funicular, another fun word, to the top of the mountain, the clicking of the cable car marking our steady ascent. The tour of the palace was fine; honestly it was fairly predictable. The real treasure lies not within the thick walls of the castle, but outside. The views of the Alps and the town of Salzburg far below are mesmerizing. I can understand how this fortress not only protected the powers-that-be from siege and how it projected power to all who approached.

We breathed in the fresh Alpine air, snapped our photos and descended the funicular  to explore our next destination, Mozart’s birthplace. We strolled along until we reached the house in Getreidegasse 9, where the great musical genius Wolfgang Amadeus Mozart was born. 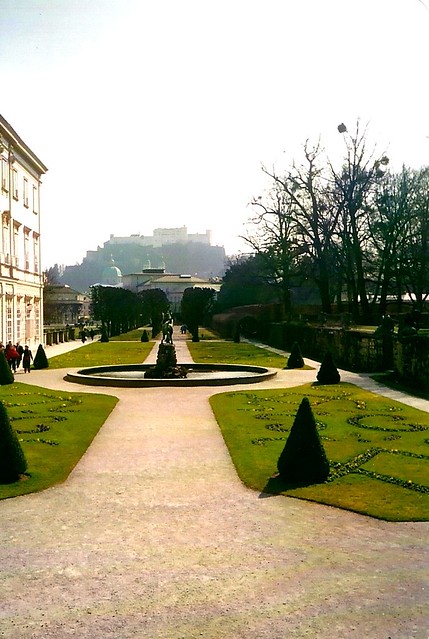 The Museum was interesting, but it was obvious it meant more to the other visitors than it did to us. Still, I enjoyed seeing Mozart’s violin he played as a child and was impressed by the work involved to recreate the living conditions of a typical, middle class family in the 18th century.

After leaving the shrine to Mozart, we ambled along and stopped for what is quite possibly the most impressive pretzel I have ever seen. More than a snack, these leviathans of dough are topped with a variety of savory delights transforming the simple pastry into a quick lunch on the go. We snacked on the mega-pretzels, I’m sure the Germans have a 25 character name for it, as we slowly walked through the Mirabell Gardens.

The name may not instantly strike a chord with many, but these gardens were the setting for the famous scene in “The Song of Music” when Maria and the children run through town singing “Do-Re-Mi.” We sat on a nearby bench and enjoyed the bucolic park, home to fountains and meticulously planned shrubs.

Hard for me to believe, the afternoon was waning and the train was beckoning. It was with a heavy heart that we turned our backs on this small city with its soaring mountains and smells of rich coffee and  pasties wafting through the air. It was only a single day, but what a day it was.