Travel to the Middle East had been growing steadily for several years and was expected to peak this year. The events of the Arab Spring put all that growth into a tailspin, but not everywhere in the region and not equally. While many of the Middle Eastern countries have seen sometimes significant drops in tourism, Israel has actually had an increase. This strange fact made me wonder how tourists traveling to the region are making their travel decisions.

Oddly enough one of the flashpoints in the Middle East, Egypt, seems to be recovering fairly well. Tourism officials have reported increasing numbers and tourist visits in key areas, especially along the Red Sea, are expected to be normal by the end of the year. Other countries have not fared as well. Jordan for example has seen a 12 percent drop in the first half of 2011 even though it never experienced the dramatic political unrest witnessed in other countries.

Israel though has maintained and even increased its tourism numbers, with some month-to-month comparisons showing a 25% increase from just two years ago. What seems strange to me, the Palestinian Authority has seen a 15% drop in tourists even though it borders Israel and usually hosts many of the same visitors.

Elsewhere in the region, Syria has logically enough seen its tourism sector nearly destroyed, but even the significantly less turbulent Lebanon has had a significant drop in tourism.

All of these facts and figures made me wonder if tourists are racist when they make their travel decisions. I can understand the drop-off in tourism after the Arab Spring, although in some cases it may not be warranted, I understand the reason. We in the West tend to paint the Middle East with a broad brush and when reporting on nations like Egypt and Syria, other countries, such as Jordan, unfortunately get caught in the media net. So I wasn’t surprised when I saw the numbers, except when I saw that Israel has not only fared well, it’s seen an increase in tourism.

Israel is in the Middle East, has had problems in the past and is a regional flashpoint. I personally think it’s safe, I traveled there last year, but I also think the Palestinian Authority and Jordan are safe. But the average traveler only knows what they’ve seen on TV and I don’t understand how Israel has escaped the image that has plagued every other nation in the area.

So why then are people flocking to Israel? It has to be based on cultural reasons. It’s possible to get by speaking English only and, in general, we here in the U.S. hear a lot about Israel and I think we are more comfortable with the concept of traveling there. But why don’t they also visit Jericho, Bethlehem, Amman, Petra – how much of it is based on racism, running from the unknown?

I unfortunately think that the one image most of my countrymen hold of what someone in the Middle East looks and acts like is the reason for this difference. There is a popular misconception that everyone in the Middle East are terrorists and prone to violence, the Arab Spring just proves the fact that they are unstable and ready to snap at any minute.

This is of course absurd, anyone who knows the region’s history or has traveled there will tell you that each country is radically different from one another and that within the individual countries you will see as dynamic a population as anywhere else in the world. 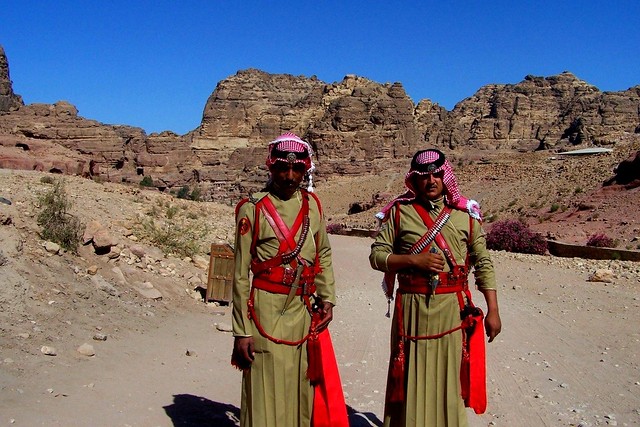 From personal experience, I can also say with certainty that the people I have encountered in the Middle East are the nicest I have ever met. They are open, honest and genuine, traits nearly impossible to find with any level of consistency in many other places around the globe.

I love Israel and am thrilled they have seen an increase in tourism. The rest of the Middle East was well on its way to the same numbers, until the violence erupted. I just hope that this does not define tourism in the region and that countries in the Middle East can recover and continue their ascent into becoming travel hotspots and that tourists realize not every country in the Middle East is a hotspot of violence.

What do you think? Is it racism keeping some people away from countries like Jordan?

23 thoughts on “Travel Racism in the Middle East”