One of the first things I noticed at the Te Puia cultural center in Rotorua, New Zealand was a sign with the daunting phrase, “Te Whakarewarewatanga O Te Ope Taua A Wahiao.” My brain hurt just thinking about how to pronounce it, but the guide for the Te Puia evening experience walked us through the proper way to say this impressive term, which translated means, “The gathering place for the war parties of Wahiao.” Pretty simple phrase for a region of New Zealand that has been settled by local Maori for more than 700 years.

Our guide that evening, Miriata Ruaporo, led us through the Te Puia property, explaining the center’s goal of preserving Maori cultural heritage for future generations. Miriata wasn’t just any guide though, she’s a fourth generation guide of the geothermal region and the stories she so easily shared are ones that have been handed down within families for decades. 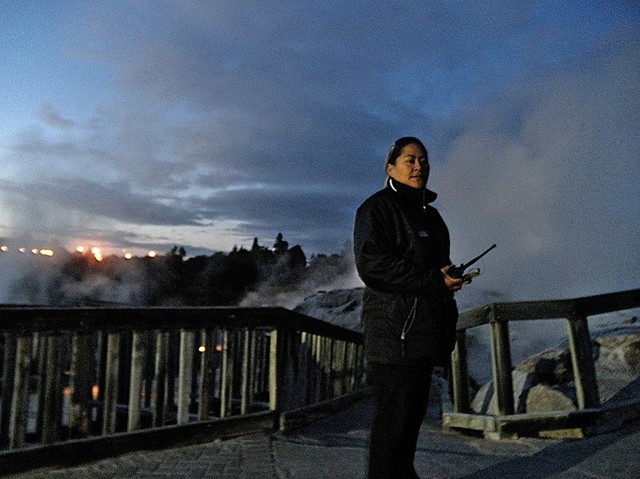 Miriata isn’t alone, most of the guides at Te Puia have strong family bonds not just to the area, but to tourism in and around Rotorua. As we walked to the wood carving school and the weaving center, it seemed everyone was related to Miriata. As she greeted aunts and brothers I quickly realized that working at Te Puia was much more than just a part-time job, it is an important part of their social lives.

We stopped near the famous geysers and as the other tourists tried, mostly in vain, to take photos in the darkness, I sat next to Miriata and started talking. It didn’t take a lot of prodding to learn more about her family’s history in the area.

The geothermal activity in Rotorua has made the region a top tourist attraction since visitors first started arriving to New Zealand in the 19th century. The original draw to the region were the Pink and White Terraces, described as the Eighth Wonder of the World and tragically destroyed in 1886 when Mt Tarawera erupted, burying them. Luckily, there are plenty of other smelly geothermal spots around to placate sore and harried tourists. 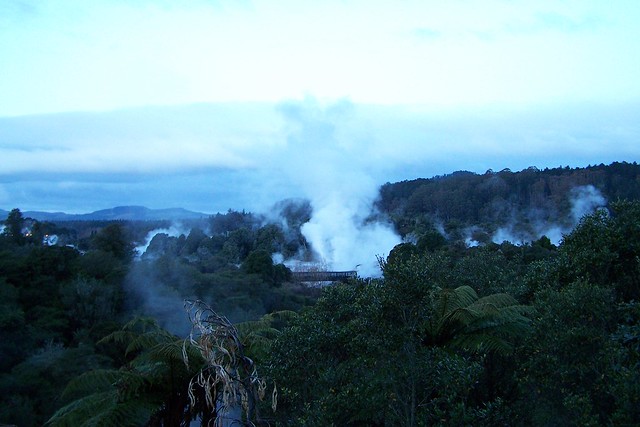 According to Miriata, when tourists first wanted to visit the geysers and mud pools there wasn’t a bridge or good way to convey them around so, for a penny, local Maori guides would take tourists around the geothermal hotspots on their backs. I can’t help but laugh imaging prim and proper Victorian visitors hanging on to their guide as they toured the bubbly, smoky geysers.

Te Puia is open all day, and visitors can visit a variety of attractions, including the traditional wood carving and weaving schools. The mission of the schools is to protect and preserve these delicate and increasingly rare skills. Acceptance into the programs is a highly competitive honor and students are carefully chosen from around the country to reflect a balance of different iwi (tribes) throughout New Zealand.

Even though there’s a Kiwi bird house and fine examples of Maori building styles, the real draw are the geysers, just as they have been for a century. The Te Whakarewarewa Thermal Valley is a unique geothermal reserve with thermal activity ranging from boiling mud pools to the world famous 100 foot Pohutu geyser, which erupts up to 20 times a day. I was there just as the sun was setting, and the effect of the smoke drifting from the bubbling thermal pools was almost mystical in its effect. I wasn’t just there to tour though, I was there for the evening hangi.

Hangi is a traditional method of cooking in the ground, but at Te Puia it’s so much more. The guides take visitors through a traditional welcoming ceremony and performance demonstrating Maori dance and music. It’s not just a demonstration though, the performers go to great pains to explain the importance of the ritual for them and their ancestors. 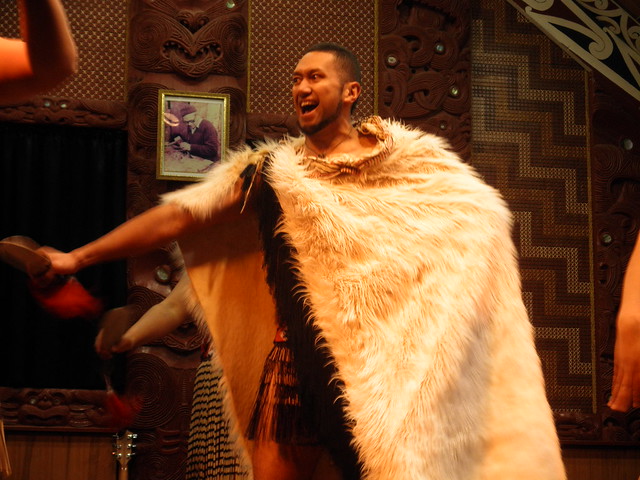 The group of tourists approached the Maori meeting house and I walked up to the men in traditional dress. I had been named the Chief of the Tourists and had to go through certain rituals of introduction that go back centuries. The show itself was a great way to experience Maori song, dance and battle preparation in a way that didn’t feel corny or overly touristy. It reminded me of the show at the Polynesian Cultural Center in Hawaii, which isn’t surprising since the Maori and Hawaiians both have common ancestors.

Finally it was time to eat, and we all shared a family style meal of meats cooked in the hangi fashion, along with pretty standard accompaniments. The evening concludes with hot cocoa while sitting on naturally heated rocks overlooking the steamy geysers; perfect on a chilly, winter‘s night.

There are several Maori cultural shows around Rotorua, but I can’t imagine a more complete and enjoyable learning experience than spending time at Te Puia.

3 thoughts on “Learning about Maori Culture at Te Puia”