I’ve written a few times about my zeal for being a tourist. That’s right, I’m not afraid of the word so many others shrink from in fear. There’s a lot to be said for finding unique travel experiences, that is until you realize there aren’t any. With the possible exception of locating a lost civilization or the reclusive unipup, everything has been done by someone at some time. After you reconcile with the fact that you are neither Captain Cook nor Indiana Jones, it’s time to embrace your inner tourist and accept experiences which are both iconic as well as extremely popular.

Just as a note, it IS important not to be a touron, more on that in this piece.

Sometimes just going with the travel flow is the best option. There is, after all, a reason why millions of tourists visit certain sites and attractions, they’re usually amazing. Even though I had many exciting, somewhat off-the-beaten path adventures in New Zealand, I also embraced my inner tourist, never more so than when I visited the Agrodome.

It was only my second day in New Zealand, and although my body had fared remarkably well, my sleep schedule was still a bit off. Consequently, I was up early and decided to hit the road for the drive to Rotorua from Waitomo. Like everything in New Zealand, the drive was marked by beautiful views and scenes of bucolic splendor so perfect in its appearance I kept looking around for the movie cameras.

I was in New Zealand at the kind invitation of Tourism New Zealand, and the schedule they had arranged was an ambitious one. In spite of my back-to-back bookings, I somehow eked out an extra few hours in Rotorua that was unexpected. Rather than take a nap or check Twitter, I decided to see more of this popular tourist destination, which is how I ended up at the Agrodome.

In my defense, I was fully away of the glorious travel tackiness that would ensue at the great dome of agriculture, and that’s what I wanted. I was in the land of rolling hills, sheep and cows after all and I wanted some hands on, albeit contrived, experience with the pastoral side of the region.

True to form, a giant Merino sheep marked the entrance to the working farm, an indicator of events to come. It was 10:00 AM on a Monday morning in winter, yet the parking lot was half full and there were three tour buses. Obviously the Agrodome was a force with which to be reckoned.

I looked around and was at first confused. I didn’t see any signs, yet everyone seemed to know where they were going, particularly the 150 Korean tourists trying desperately to get sheep manure off of their Adidas sneakers.

In light of the fact I was expecting a corny tourist experience, I was perhaps naïve when I approached an employee in the retail shop and asked what there was to do there. She looked up, smirked and pointed towards a previously unseen box office. Box office, not the usual farm scene. 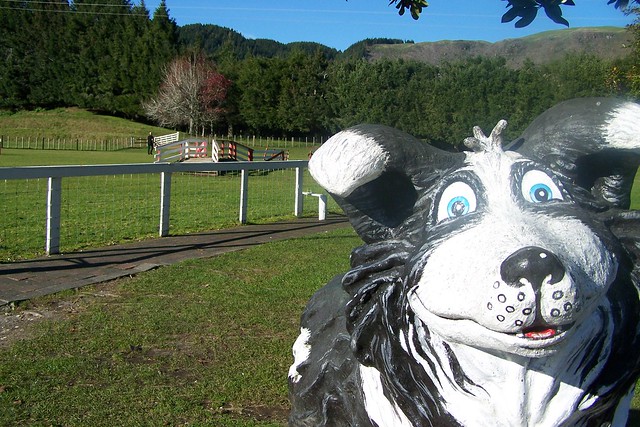 As I soon learned, there are a variety of entertainment options available to visitors of the Agrodome, farm tours, sheep shows and even a hedge maze. I looked at the timetable and the only activity I could do was the sheep show, which was conveniently my top choice, for the considerable fee of $27.

After regaining my composure from the shock of the price for a sheep show, I pocketed my receipt and prepared myself for the promised hilarity and education.

Everyone knows that New Zealand is famous for its sheep. It seems that one of the few factoids everyone remembers about this island nation is that there are more sheep than people. (True – There are about 11 sheep for every one Kiwi) Since I love finding animal related activities when I travel and I was interested in the farming culture, the sheep show seemed like the perfect balance of the two.

There I sat with my new Korean friends, anxiously awaiting the start of the show and admiring the many different breeds of sheep on display along the periphery. Then, almost with a bang, the ringmaster (honestly, it really is the best description) entered the stage and the sheep extravaganza began.

One by one, Mr. Kiwi Sheep Guy led the eighteen breeds of sheep to their spot on stage, soliciting the help of audience members at strategic moments. It’s not for everyone, but I liked it and silently laughed as nearly every sheep soon fell asleep. 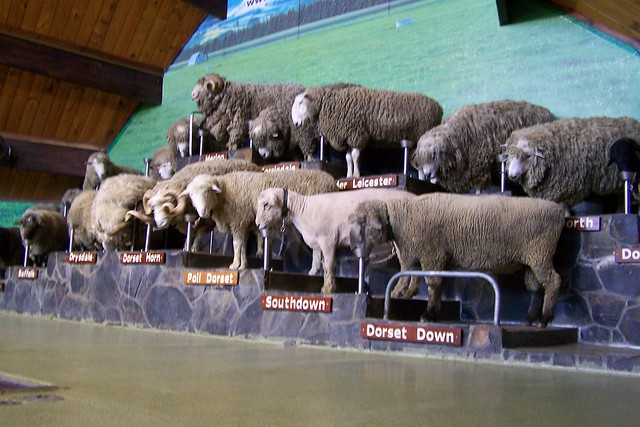 The rest of the show consisted of a sheep shearing exhibition, cow milking display and an impressive example of sheep dogs at work. At the end some baby goats entered, everyone went “aww” and that was the end of the show. As a special bonus, the ringmaster led an expanded demonstration of sheep herding with an amazing pup.

I know for many people, what I just described is their version of travel purgatory, the experience necessary to suffer through only to attain permanent peace. I admit that it was an extremely corny, cheesy, touristy experience, but I liked it. I knew what to expect going into it and wasn’t anticipating a life altering activity. I correctly surmised that it would be contrived, but interesting, corny, but entertaining. Also, for family travelers out there this place is ideal for kids.

Experiences like the Agrodome, a very commercial, touristy activity, have their place in the travel world and rather than turn a snobby nose at them, every tourist should try them periodically. Getting off the beaten path is fine, but it can also be a lot of fun to see what those lemmings find so interesting.