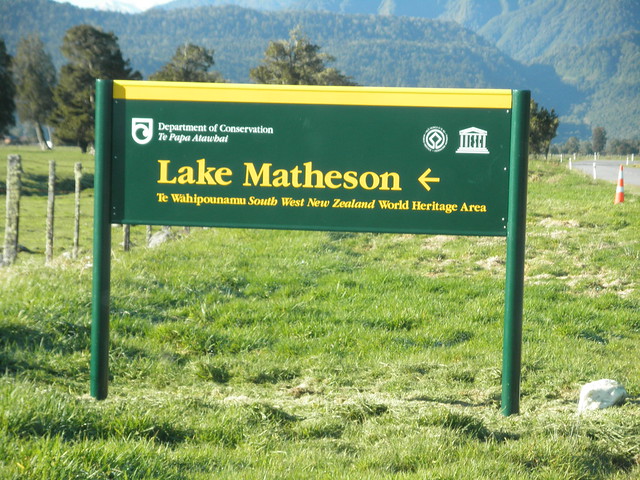 My trip to New Zealand, as part of the Blog4NZ Project, was a whirlwind romance. I was there for only a week, yet I visited both the North and South Islands and was never in the same bed twice. I know it’s not the ideal way to explore the country, but I enjoyed almost every minute of it, especially the long drives.

I’m not normally a big fan of driving long distances, I’m a fairly impatient person and just want the process of getting there to be over as quickly as possible. New Zealand was different though and I started to look forward to the drives across long stretches of gorgeous scenery. That’s how I discovered Lake Matheson.

The Lake hike was actually the recommendation of an employee at Glacier Helicopters, the fine folks who took me on an exhilarating trip around and on the Franz Josef Glacier. As I was leaving, the Kiwi scenery expert pulled out a map and said, “Well you just have to stop here, it’s stunning.”

At first I was dismissive, everything in New Zealand is stunning and there wasn’t enough time to keep stopping to admire whatever the next example of heart stopping beauty happened to be around the next bend. I looked at my schedule though and decided that I had enough time and went for it.

I left the tiny hamlet of Franz Josef on the mountain road, navigating hairpin turns, one-way bridges and countless signs warning me of ice and grit. It was winter in New Zealand, and the weather could turn on a dime. So far I had been lucky though, unusually clear skies had accompanied me along the coast of the South Island. After thirty minutes, I arrived at Fox Glacier Town, home to the Lake Matheson conservation park, part of the South West New Zealand UNESCO World Heritage Area.

Just as a side note, my unscientific and not at all researched opinion is that New Zealand has done a great job with their national park system and conservation efforts in general. Granted, I was in areas of “high beauty” that lends itself to protection, but I was really pleased to see all of the signs designating even the smallest bit of land as protected.

Lake Matheson sits in the middle of farmland, cows and sheep mindlessly chomping away at blades of grass, not aware of their participation in what is arguably one of the most stunning views in the country. That view of the twin peaks of Mount Cook/Aoraki and Mount Tasman filled my rear-view mirror as I pulled into the parking lot.

The goal of the hike at Lake Matheson is simple, to get to the spot across the lake home to one of the most photographed, iconic views in New Zealand: Mt. Cook and Mt. Tasman reflected perfectly in the waters of the still lake. I’m not a professional photographer by any stretch of the imagination, but I knew this was a photo I just had to take. 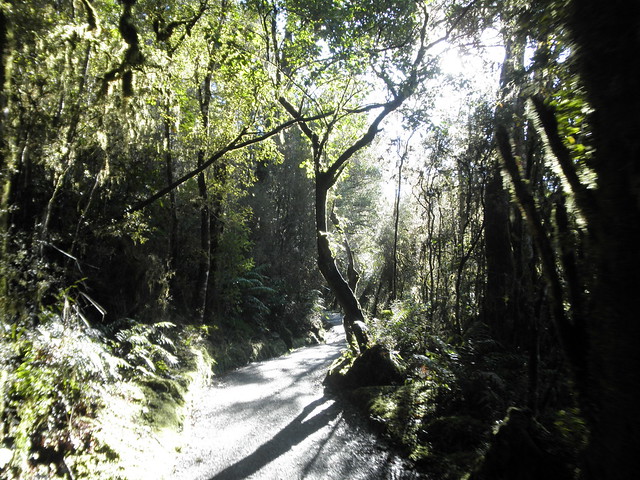 I was surprised at how much infrastructure was at the park itself. There’s a car park, restaurant and decent little souvenir shop selling crafts and artwork. More importantly, the hike around the late is well marked and easy to navigate. The sign at the entrance said the entire loop around the lake takes the average person around 90 minutes. I glanced at my watch and started trekking.

This area of New Zealand has a bizarre combination of topography and even climates. Looming high above are the Southern Alps, with their glaciers and ice, yet surrounding me on the hike was a lush, green forest covered with primordial ferns and mosses. These extremes rarely coexist, the only other place in the world is in Argentina. The rich canopy of flora created a sense of adventure and mystery as I meandered around the trail.

My schedule demanded I arrive in Wanaka by early evening, and given how slow I was driving on the gritty mountain roads, I knew I didn’t want to waste a lot of time along the way. So I nearly sprinted along the path, desperate to get to the point with The View. In typical, unassuming Kiwi manner, the ‘perfect’ spot for reflection photos is at a location the park has designated as “The View of Views.” 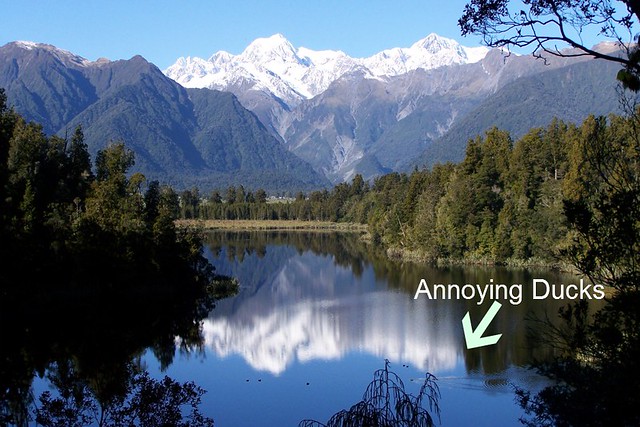 Finally, I arrived and indeed, the views were amazing. The mountains were directly in front of me, reflected perfectly in the waters below. Or least they would have been perfectly reflected had it not been for a few ducks in the middle of the lake. I couldn’t believe it, I had hiked 45 minutes to reach this spot, had another 45 minutes left and had added a lot of time to my day all to have it ruined by a quacking avian.

I took some photos, not totally satisfied with them and left the perch, a little dejected. About ten minutes later along the path was another sign pointing towards a dock mid-lake that was simply called Reflection Island. Hoping it didn’t mean personal introspection, I took my chances on the island. 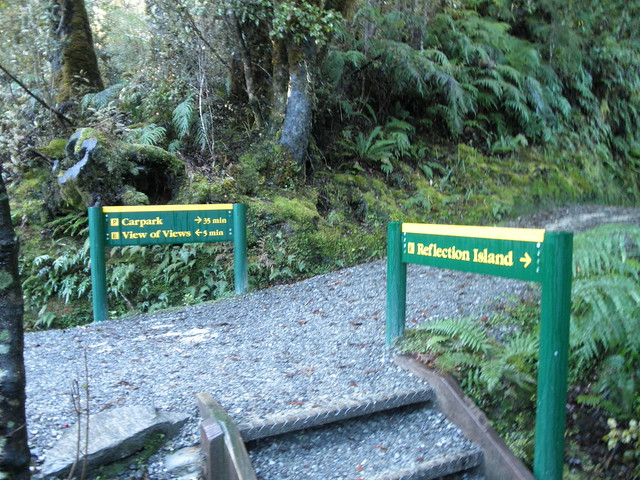 Because of its position well past the ducks, I was given a second chance and this time it was perfect. I couldn’t believe it, THIS was the View of Views, I took dozens of photos, not wanting to screw up the opportunity, allowed some time to admire the landscape without a viewfinder and continued on the path. 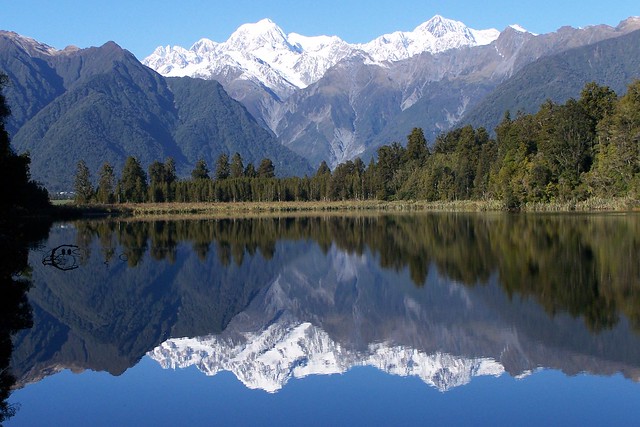 The mountain roads did in fact take longer than I expected, as did my nearly constant stopping in order to record dozens of amazing vistas along the way. The drive from Franz Josef to Wanaka is one of the most amazing I’ve ever driven, but it was that stop at Lake Matheson, to get The Picture, that was the highlight of the day.