Today I am thrilled to introduce this guest post by Jeff Titelius. Jeff is a true expert when it come to European travel and I am excited that he agreed to share some of his expertise with us here on LandLopers. For more of Jeff’s expert European advice, head to his remarkable site EuroTravelogue.com.

For more than 1,000 years, the Florence Baptistery has stood upon the ground just outside the front entrance of the Florence Duomo in Italy and unfortunately, it is oftentimes overlooked in the frenetic pace of most tourists’ itineraries.

Renowned for its “Gates of Paradise” that adorn its eastern façade, the Baptistery of St. John or the Battistero di San Giovanni is not only a journey into the temporal world but as I discovered during my last visit, it was a journey into the spiritual world as well. If you’ve never been to the Baptistery, come with me and explore this magnificent relic of Florentine history…it’s a journey for the mind and soul. 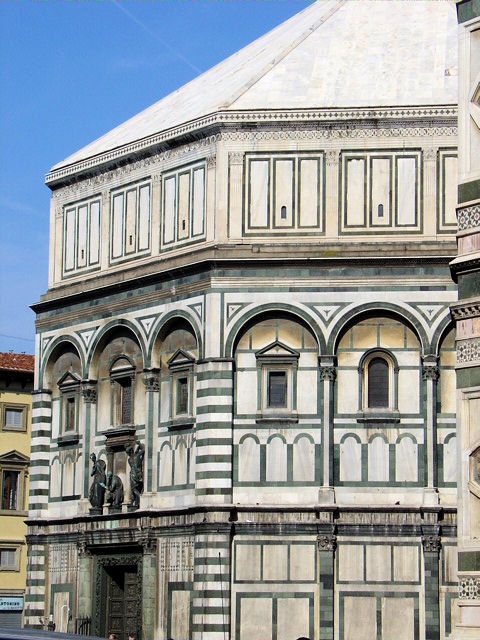 Lesser known for its rich history that dates back to the 4th and 5th centuries, today, the Florence Baptistery is mostly known and visited for Ghiberti’s legendary bronze panels, the “Gates of Paradise,” that grace its exterior eastern doors – opposite the front façade of the Florence Duomo. The name is believed to have been coined by Michelangelo himself because of their magnificence and glory.  Completed in 1452 by Lorenzo Ghiberti, the Gates of Paradise are the result of a contest that Ghiberti entered and won against Brunelleschi, the renowned architect who designed the dome structure for the Florence Duomo.

The panels, ten in all, represent scenes from the Old Testament and each is a tribute to Ghiberti’s mastery of relief.  He introduced the technique where successive scenes appear simultaneously within the same panel with applied perspective, which at the time, was a relatively new technique introduced by none other than Brunelleschi. If you look closely in the “Jacob and Esau” panel, Ghiberti sculpts a self-portrait – a balding man at age 60, and signs it as well. Although quite stunning to behold in person, these panels are replicas due to the effects of erosion, vandalism and floods. Today, the originals are housed in the Museo dell’Opera di Santa Maria del Fiore museum, just east of the Duomo.

As for the actual edifice, the Florence Baptistery is steeped in a fascinating history dating back to the 4th century where earlier baptisteries stood upon this ground.  Later in the 9th-century, a temple to Mars, the Roman god of war stood here and it wasn’t until 1059, that the Baptistery we see today was consecrated as a temple for Jesus, the Prince of Peace.  Long gone is the Roman cemetery that surrounded the building filled with sarcophagi used by the prominent Florentine families of the day.  On the outside, the weathered exterior boasts a Romanesque design and actually contains granite pilasters believed to be from a Roman Forum in Florence that once stood in the area known today as the Piazza della Repubblica. 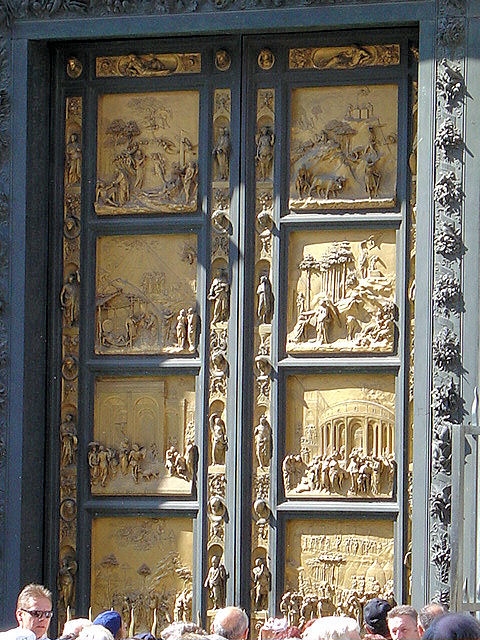 Leaving the temporal world behind, you enter a state of transcendence when you embark on a spiritual journey through the Gates of Paradise, and it’s this journey that touched me so profoundly on my last visit.  When you step through the threshold of the southern doors, gaze unto the heavens that glisten with dazzling golden mosaics whose brilliance illuminates the entire interior of the structure.  The work of Venetian artisans, these masterpieces were created during the Byzantine era in early 13th century. The focal point is Christ in the “Last Judgment” flanked by His Angels of Judgment. Souls of the saved appear at Christ’s right hand and those of the damned, at His left.  Other sections depict the Choirs of Angels (Thrones, Dominations and Powers), stories of Genesis, stories of Joseph, stories of St. John the Baptist and finally, stories of Mary and Christ.  Surrounding the figures and what gives the ceiling its shimmering radiance, are the glass tiles who owe their brilliance to the gold leaf painted on the back.

Usually constructed as eight-sided buildings, baptisteries as we all know are a place to be christened but did you know that its eight sides represent the “eight days of man”? The seven days of man as told in the Bible in Genesis are those days in which God created heaven and earth.  However, it is on the eighth day when Christians are baptized that they enter into “paradise” or eternity with God, when they pass through the “Gates of Paradise” to the promise of eternal glory, love and light everlasting.

Pretty moving, huh?  From the temporal to the spiritual, your journey awaits through the gates of paradise, and whether you’re religious or not, you’ll be moved in some way when you behold their magnificence.  Be sure to include a stop here on your Italian itinerary so you too, will discover the rich history and heritage of the Baptistery in Florence, Italy.

Jeff Titelius is a freelance travel writer whose goal is to travel the world with journal and camera and share those journeys with you. He contributes to a variety of online and print publications but his latest endeavor is his website EuroTravelogue.com where he shares his passion for European travel – journeys to world-renowned destinations and some off-the-beaten-path adventures that offer up magnificent architecture, fascinating histories, and spectacular landscapes.

17 thoughts on “Through the Gates Of Paradise at the Baptistery in Florence, Italy”