Rachelle is an amazing talent. She’s a videographer, writer, travel expert and foodie extraordinaire. Add to that an exciting and vivacious personality, and you have a wonderful person to know. She was kind enough to share with us her story of exploring Geneva as a local, and one of the best gelato recipes she found during her time in Switzerland. You can find Rachele on Twitter and her new site The Travel Bite. 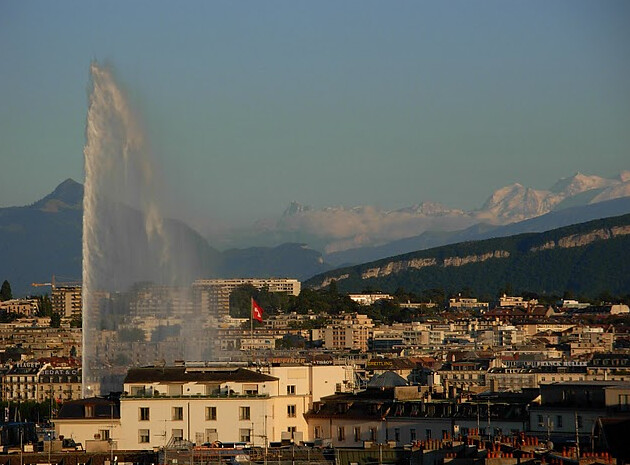 Traditionally known as an Italian treat, my very first taste of gelato was actually in Geneva, Switzerland.  En route to Italy from France, I stopped there for a week to visit friends.  The view from their balcony was spectacular … the jet d’eau rising tall above the clay rooftops with Mont Blanc peeking over the clouds on the horizon. Sleeping on their couch, waking in the morning to brew thimble-sized cups of coffee, and running basic errands … it was great to be immersed in the day-to-day happenings of a local.

While at the post office, I learned that my school-book French was a little too formal for the Swiss slang of “whey” vs. “oui.” I learned that swiss cheese doesn’t actually have holes in it, but instead is the soft pungent kind that must be the origin of the English phrase, “who cut the cheese?” And I learned that there is not much to do in downtown Geneva unless you’re filthy stinkin’ rich.  Seriously. The lake is lined by all the world’s banks with the most rare and expensive cars parallel parked outside. It was the ultimate in curbside auto shows. I half expected to see James Bond or Jason Bourne exiting a building in a rush, running across the street with a sack full of cash, and then hot-wiring a Maserati.  There was no such excitement. There were, however, a few stores with jaw-dropping merchandise and matching prices. Geneva is the perfect place to buy a custom hand-crafted $100,000 watch or bulky Louis Vuitton luggage that really should only grace the plush interiors of private jets; never to be banged up by baggage claim on standard commercial airlines.

The one thing I definitely could afford to do? Eat. The three basic food groups in Switzerland are chocolate, cheese and beer. The chocolate was a great take-away for souvenirs.  The cheese … well … there is only so much one can eat without plugging your nose and feeling like you just ate a dirty gym sock. As for the beer, it’s delicious.  But be careful how you order since most of the Swiss are also half German. One night at a pub I was surprised to have a beer tower delivered to our table.

Thankfully, I found culinary refuge in sweet gelato. Among the traditional fruity flavors I discovered a savory intrigue … lemon basil.

Back home I experimented with a couple different gelato recipes and found the right combination to make it taste like the lemon basil gelato I had in Geneva. Here’s the recipe:

Using a fork, whisk together egg yolks and sugar in a medium-sized bowl until the volume doubles (becomes frothy) and the color becomes a light yellow.  Set aside.

Next, add the egg and sugar mixture to the saucepan with milk and cream. Continually stir until well blended and the mixture coats the back of a wooden spoon.  Add the lemon extract, zest and crushed basil and stir while on med/low heat for 2 to 4 minutes.

Pour the mixture through a sieve or fine strainer into a bowl.  This will remove any solid pieces of lemon zest, basil or egg and create a more smooth even texture.  Cover and chill the gelato mixture for a minimum of four hours or let it set overnight in the refrigerator.

Rachelle is a writer, spokesperson, and travel videographer. She believes the best way to learn about a destination is through its flavors. As a former innkeeper, Rachelle learned to cook by practicing with chefs she met while spending 3 years managing social media marketing for multiple bed & breakfasts. She’s worked for the Travel Channel as a video journalist and regularly appears on HSN and the syndicated morning show, Daytime, as a guest chef. Rachelle’s breakfast blog, Inn The Kitchen, has been recognized 5 times as one of FoodBuzz.com’s Top 9 Featured Publishers. On Twitter she is named one of the Top 50 Most Influential People In Travel, and in print Axis Magazine named her one of the Top 20 Coolest People in Orlando.