The small island of Santorini in Greece’s Cyclades, offers visitors a panorama that is world famous for its singular beauty. While many people travel to Santorini to spend a week or even more, thousands of people visit for a day as part of a Mediterranean cruise or day trip. Fortunately, it’s easy to enjoy the best of Santorini in only a day.

Modern day Santorini is recognizable for its large, semi-circular harbor and steep cliffs leading down into it. This is actually a caldera, the result of a volcanic explosion that created the unique geography found on Santorini today. Many believe that it was this tremendous explosion more than 3,500 years ago that created the myth of Atlantis, referring to the resulting tsunami that spread throughout the region killing thousands.

The approach to Santorini was one of the most impressive during our cruise and standing on the bow as the cliff houses came into sight was amazing. Not for the first time, I felt as if we were sailing into a living postcard, participants in a panorama of stunning brilliance. 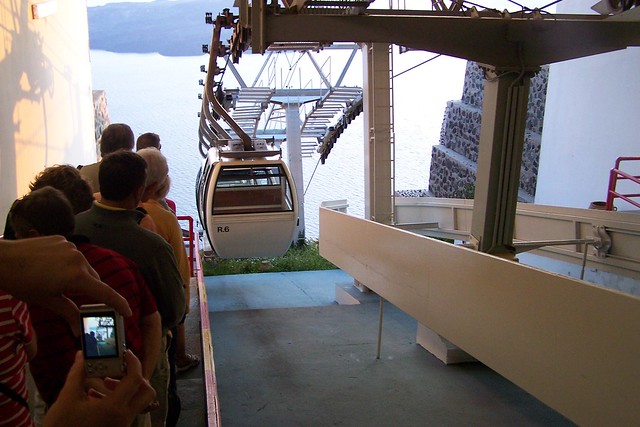 Cruise ship passengers must tender to the docks, which means they take a smaller boat directly from the cruise ship. After arriving, passengers have two options for ascending the daunting cliffs to reach the first city, Fira: funicular or mule. There really is no question here, the donkeys look sad and tired and I personally could never support an industry that takes advantage of these poor animals. Do your part and instead take the cable car (4 Euro each way) to the top or, if you’re up to it, you can also walk the impressive switchback trail to the top. Just watch out for donkey presents.

Once you emerge from the comfortable cable car ride, which in itself offers amazing views, the visitor is unceremoniously dumped into the thick of the small town of Fira, the capital of Santorini.

It is a massive understatement to say that tourism has found Fira. The town is a maze of shops, restaurants, hotels and clubs, each trying to separate the legions of tourists from their cash. There are some good shops tucked away and depending on your interests may be a good stop. The iconic white washed buildings are well evidenced here, adding to the feeling of walking into a postcard.

After we admired the views, tried some Santorini wine and played with one of the many Santorini dogs, we walked out of the main tourist center to the bus station. The famous shots of Santorini are all taken from the city of Oia, and that was our destination as we boarded the bus. There are several ways to get there: rental car, cab and bus. Bus is by far the cheapest and was easy to use.

We were deposited in the middle of Oia, and followed the hordes along the narrow walkways between the white washed buildings. At once I could see a huge difference between the two towns. Oia was much more reserved, refined and not as kitschy as Fira. It was also a much more breathtaking area. At once we started to see the famous blue domes of the island, a sharp contrast with the white buildings as they glistened in the sun. 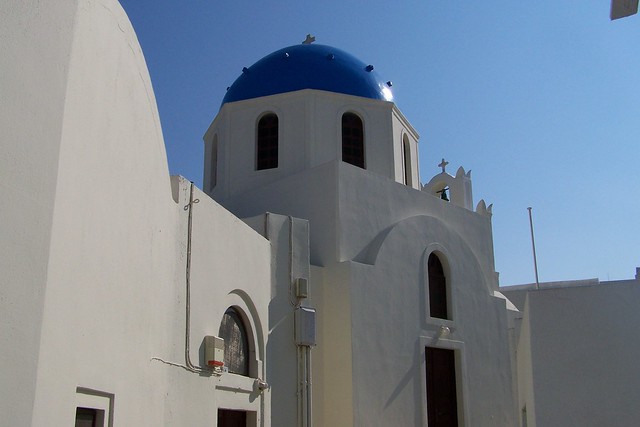 Everyone knows THE famous shot from Santorini of the caldera and a blue domed church in the foreground. What I can’t really do is tell you how to get there. Instead we followed the great tourist masses, who all seemed to know where they were going. We navigated a tiny alleyway and we were there, at one of the most photographed areas in the world.

It was stunning, absolutely stunning. Some places seem better in photos or are misrepresented, but not Santorini. It is just as beautiful and mesmerizing in person as it is in every travel calendar I have ever tacked to my wall. After admiring the views of the sun bouncing off of the water below, we strolled along the cliff-side walkway that defines the town. Stairs leading down to hotels, restaurants and houses were a constant feature, and you have to be able to negotiate stairs in order to really explore. 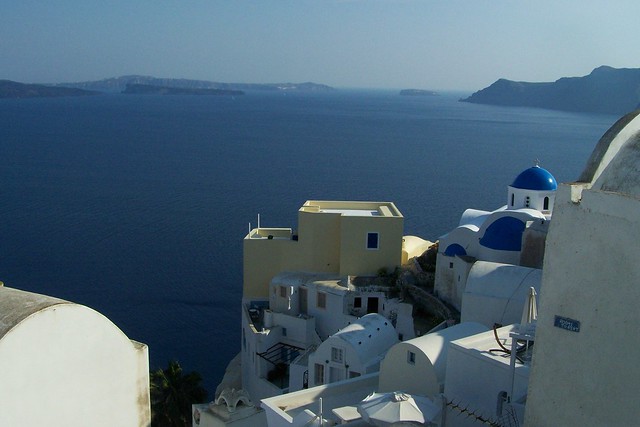 Eventually we found a cafe with better views than food and enjoyed some mezze and a beer, saying nothing and instead just staring out at the Aegean. Eventually, it was sadly time to leave. We took the bus back to Fira where we once again descended the cable car to the docks as the sun set in the distance.

As the gigantic ship set sail that evening, I watched as the tiny island grew smaller in the distance and knew that I had found one of those unique moments when everything just seems right in the world. 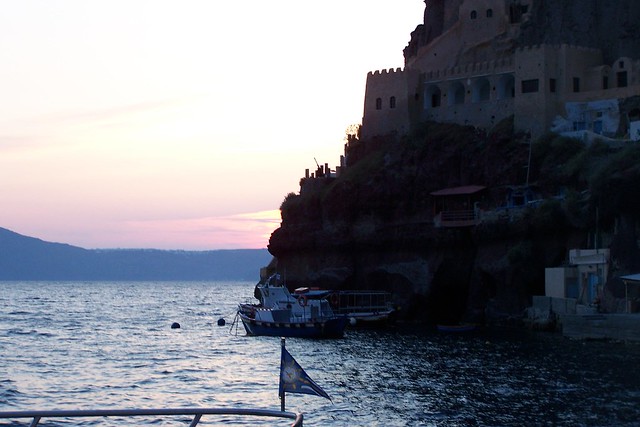 Note: There are a lot of other activities to amuse yourself for a day, including archeological tours and wineries, but if it’s your first visit to the island, I strongly recommend spending the day as we did.