A new buying trend has been buzzing around the social media world for a couple of years: daily instant savings coupons. The theory is simple, every day these companies send out an email to their subscribers with “special deals” for their city. It can be half off a spa visit, restaurant savings or even hotel rooms. At first blush these savings appear to be amazing bargains, but are they really a good deal when it comes to travel?

It’s a little difficult to efficiently evaluate Groupon and LivingSocial, since LivingSocial offers a specific travel category which Groupon does not. Rather than a scientific analysis, this will instead be based on my own experiences.

Restaurants, tours and other piddly things

The bread and butter of these coupon services appears to be restaurants and laser hair removal services. While the later won’t be of interest to a tourist (unless you’re going on a medical tourism getaway to Washington, DC, which would just be strange) the former is definitely alluring to the budget traveler.

It’s attractive until you realize that the entire premise of Groupon and LivingSocial is to convince you, the consumer, to buy things you don’t want to purchase. There is usually a reason why the business are being featured, they need customers. You don’t typically see the top restaurants in town participating in these services. Rather it’s the quiet little establishment that no one seems to patronize. Restaurant deals also aren’t always very impressive either.

Restaurant deals vary, but are usually buy-one-get-one, or spend $10 for $20. At first it sounds good, but you really have to do your research. Buy-one-get-one is almost always the better deal, but more rare. A discount is much more common, but can be misleading. Review the menu before buying the coupon to ensure the prices are reasonable for your budget.

One activity I think LivingSocial and Groupon are perfect for are city experiences. During the Cherry Blossom Festival, LivingSocial had a great deal on a cruise around the Tidal Basin, and recently Groupon had a white water day trip package that was actually a nice savings. You just have to do your research and determine for yourself whether or not it truly is a fantastic deal. This is especially true when it comes to larger purchases.

The really interesting aspect of this new way to impulse buy is LivingSocial’s Escapes. These are travel deals ranging from a weekend at a nearby B&B to a week in the Caribbean. As with the Lasik eye surgery and hair removal deals, these are seemingly fantastic offers on amazing getaways, sort of.

One day a LivingSocial email made its way into my inbox, offering 50% off a luxurious hotel stay in the nearby mountains of West Virginia. My partner had an upcoming birthday and I thought a nice day away would be the perfect present.

The deal was straightforward. For $197 we would be entitled to an evening at the Hillbrook Inn in “quaint“ Charles Town, West Virginia. Included in the rate was:

It didn’t sound like a bad deal, especially since LivingSocial said this deal was normally worth $395. Not wanting to be duped, I checked out the rates for the hotel on another site, finding a stay and breakfast combo for $250. Not quite the tremendous savings LivingSocial advertised, but a savings none the less. Just as I was supposed to do, I impulsively purchased the deal. According to LivingSocial, I was one of 498 people who made that same decision.

I understood that the hotel stay was subject to availability and that I had a very specific date in mind for the getaway. One positive feature of the deal is that it was valid for a year, very generous I thought. What I didn’t realize is that the Inn is really a bed and breakfast and that the Main House wasn’t the only rooming option. 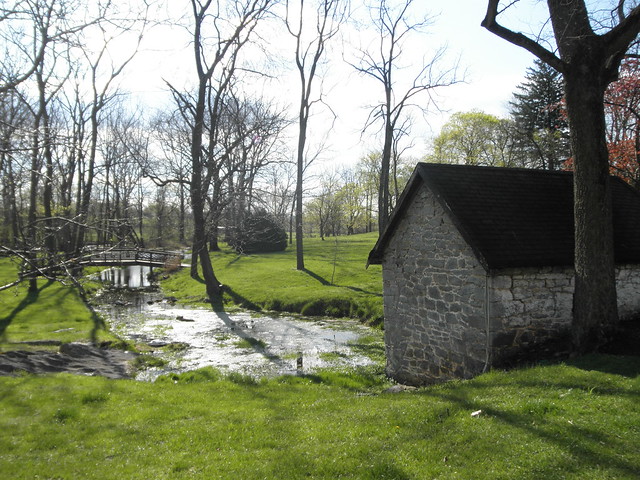 When I called I was told unfortunately that the only room available for my selected evening was something they called the Snuggery. It sounded cute, but when I asked if two guys over 6’2” would even fit, I was met with a fairly awkward pause. Right. The overly pleasant receptionist did say that we could stay in one of their cottages. Fantastic! Cottage sounded infinitely better, and larger, than a Snuggery. I was then informed that it would cost an extra $100.

I felt stuck, but obliged, trying to convince myself that I was still getting a deal. The bed and breakfast was fine, nothing extra special and oddly placed in the middle of a residential suburb of Charles Town, which just seemed strange. The employees were ok, but obviously flummoxed with the LivingSocial inclusions. The promised cookie tray was actually a couple of petit fours and the complimentary sparkling cider didn’t come with a bottle opener, so all we could do was stare at it.

I don’t regret our stay, but I also don’t think it was a great deal. But everything about the experience was designed to make me think I had scored a great deal. I imagine the rest of the escape packages are more of the same. Mediocre savings at mediocre locations. Truly successful properties don’t need Groupon or LivingSocial for promotion, and that fact has to be constantly kept in mind.

I’m not against Groupon or LivingSocial. I think they’re exciting companies doing exciting things. I just want people to avoid jumping first and thinking later. These deals are a true example of caveat emptor, buyer beware. Both companies have travel deals for the taking, you just have to figure out for yourself which ones are good deals and which ones are a bust.

16 thoughts on “Groupon and LivingSocial: Good Budget Travel Option or Waste of Money?”