I have a love/hate relationship with spas and related treatments. I really like the idea of them; being pampered and emerging from the den of relaxation in a Zen state of mind. I almost never enjoy them though, instead I stress out about whether or not I’m relaxed enough and I end up feeling like I’ve been to the chiropractor instead of a massage therapist. I met my match though in Marrakech with its famous hammam treatment.

A hammam is the quintessential Moroccan spa treatment, the likes of which are unknown anywhere else in the world. This is probably planned, since the treatment isn’t all about unicorns and rainbows, it’s a tough, no holds barred service that guarantees to clean.

In its most basic form, a hammam consists of several stages of cleansing, including alternating hot and cold water, lavish use of the area’s famous black soap and lots and lots of scrubbing. There are many public hammams found throughout Marrakech, but for a real treat every traveler should splurge for a treatment at one of the many posh riads found in the old medina.

On the second day of our tour through Marrakech, we decided to join the Splash Morocco day trip to the Ourika Valley in the Atlas Mountains for an exciting white water tubing experience. Afterwards, we were chatting with our guide Andy who asked if we were going to take a hammam during our stay. After some convincing, I agreed but Andy left me with a word of advice, “Bring your own swimsuit.”

Nothing in Marrakech is easy to find and I don’t know why they even bother with street names and numbers. Regardless of the laughable map in hand, I found La Maison Arabe, a luxurious riad, nestled in the old medina.

Walking through the lobby on the way to the spa, I instantly regretted not staying at the riad versus the generic Western hotel we foolishly booked. The décor was decidedly Moroccan, without being campy or ostentatious.

I was led through the lavish spa, lit by candles and a fragrant aroma filling the air, the scent of which I can only call ‘exotic.’ My French is ok, but not great, and their English was ok, not great. That meant the universal language of all travelers came into play – odd and sometimes wild hand gestures. Regardless of the method of communication, the message was clear, she gave me a small packet that looked like a condom and told me to change. 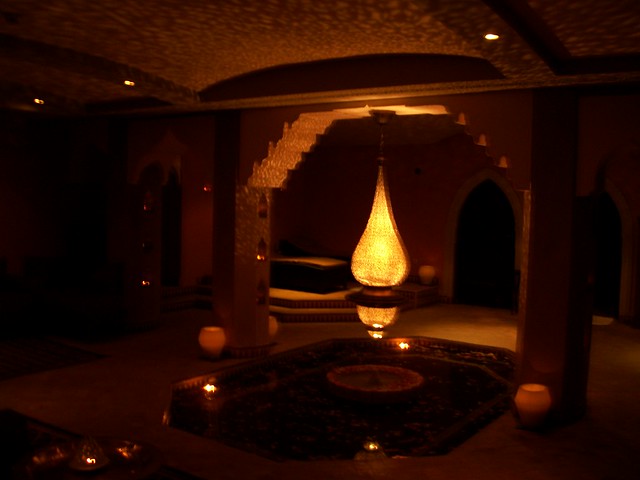 I nervously tore open the wrapper and Andy’s warning came rushing back, it was a small bit of nylon, somewhat fashioned into a Speedo. It was so small I don’t think you can even call it a proper piece of underwear and certainly not swimwear. They honestly intended for me to wear this during the treatment. I tossed it aside and instead put on my trunks. I’m all for cultural experiences, but I wasn’t about to go into the hammam naked.

Unlike the public hammams in town, the Maison Arabe has a separate, and private, hammam chamber set up for its guests. I was led by the presupposed masseuse and entered a chamber completely lined in tile, with a series of built-in benches. I was told, pointed really, to lay on the closest bench face down. I acquiesced, but before I could do anything else I was washed down in ice cold water, and then left to reflect on the shock of the experience.

As I recovered from the shock, steam started to fill the room and before I knew it, I was enveloped by a hot mist. Just as I started to relax, the prison guard/masseuse reentered, turned off the steam and began peeling off my skin.

If you are familiar with the loofah or even one of those fancy scrub brushes, it’s not even a fraction of the gommage that takes place during a hammam. After she successfully removed a few layers of my epidermis, it was time for the unguents.

A mixture of oils and lotions were used, but the one thing I recognized was the famous Moroccan savon noir, or black soap. I’m not exactly sure what constitutes black soap, but it’s a thick, gel-like soap that has the consistency and look of tar. It also has a fierce reputation for microabrasion and detoxification, so I remained still as the expensive ointment was spread liberally about my corpus, then forcefully washed away with the aid of the scrubbiest of brushes.

After the cleansing, which was VERY thorough (enough said) there was more washing, both hot and cold, until finally I felt as if I had been as thoroughly cleaned as a human could possibly be. I was left on the bench, sore but clean, happy but confused. I reflected on the experience until I somehow got the energy to walk drunkenly across the hall to the changing area. I awkwardly changed into my street clothes, paid the cashier and ordered a cab back to my hotel where I promptly took a nap, it didn’t matter that it was still mid-morning.

Although it’s not for the faint of heart, taking a hammam is a must-do activity for anyone visiting Marrakech.

15 thoughts on “Getting Naked in Marrakech”