My first visit to Hawaii last year began as it does for millions, with a stay in Waikiki. This area of tropical perfection has, over the years, grown at an incredible rate and today is an interesting mix of the laid back, Hawaiian spirit of Aloha and Las Vegas. I’m not criticizing it though, it’s that strange combination which makes it endearing. I did though find a few strange things during my visit.

Shooting Ranges
Japanese gun laws are extremely strict; among the most severe in the world, and state that no one can bear firearms under any circumstance. In an odd sociological phenomenon, the combination of these gun laws and the mystique of being in the U.S. turns normally mild mannered Japanese tourists into gun crazed shooters.

There are dozens of gun clubs throughout the islands, mostly catering to Japanese tourists, although certainly all are welcome. This was a first for me and my fascination over this gun tourism phenomenon is endless. 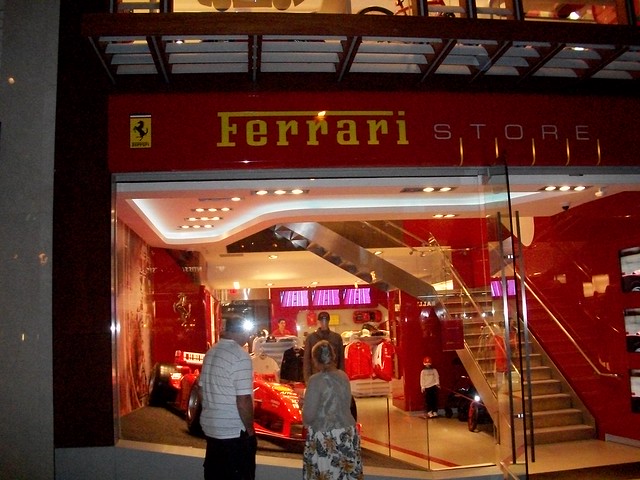 Ferrari Store
After a while, the high end stores all start to blur into a single image of dramatically overpriced items that most people I know will never be able to afford. But for some tourists, it’s a free-for-all of consumerism. At the height (debatable) of this tower of capricious capitalism is the Ferrari store.

If you’re a fan of Ferrari, one of the priciest car brands in the world, and have the bank account to match, then this is the store for you. For a mere $150 you can be the proud owner of a Ferrari sweatshirt, or for the speedy baby in your life a $700 Ferrari stroller. While this store isn’t for the everyman, it’s definitely worth a look for the wow factor.

The Food
Waikiki is home to many fabulous, world class restaurants. I’m not a foodie though and most five-star dining is lost on me. Rather, I usually seek out what’s simple and delicious. I did my homework before leaving home, but I still wasn’t prepared for some of the odd culinary finds.

Loco Moco – This is not for those with a weak stomach, but does make for an excellent late night meal. In its basic form, loco moco consists of white rice topped with a hamburger patty, a fried egg, and brown gravy. Best consumed while drunk or on a dare. Or both.

Spam – Spam is hugely popular in Hawaii and can be found on the menus of most restaurants, at all times of day. Hawaii boasts the largest consumption of Spam per capita in the country and one of the most popular dishes made with this mystery meat is Spam musubi or Spam sushi. Just like its fishy cousin, the Spam roll is composed of a block of rice with a slice of grilled Spam on top and nori wrapping to hold it together. It actually makes for a great, on the go snack.

Hawaiian Plate Lunch – This omnipresent menu item is a simple treasure. Consisting of two scoops of rice, a scoop of macaroni salad and an entree, it is one of the most popular meals in Hawaii. My personal favorite was the katsu plate lunch, a breaded and fried piece of  chicken or pork scaloppini. I could eat this every day and be a very happy person.

Aloha shirts
Once again, I really shouldn’t have been surprised at this, but everyone really does wear Hawaiian, or Aloha, shirts. Even better, they’re an accepted, and expected, form of business attire. I was in heaven. The trend started in the 1970s when a clothing trade association in Hawaii convinced Honolulu business owners to relax their dress code for employees. That simple act turned into a revolution and was quickly adopted for full time use. The relaxed clothing is a perfect match for the island spirit and is infinitely more comfortable than stuffy and uncomfortable suits. The concept of relaxed dress codes didn’t stay on Hawaii though, what began as Aloha Friday circled the world and became what we know as Casual Friday. Yet another reason to love Hawaii.

It really is a great place
Throughout my stay in Waikiki, most of the locals were concerned that I wasn’t going to explore more of Oahu or the other islands. Once I convinced them that yes, I indeed would be exploring further they all looked visibly relieved. I’m not sure why they had so much angst, not only did I love Honolulu, but I loved Waikiki. That was the strangest thing I discovered on my trip, that a place so famous for rampant commercialism can actually be a great place. Once you peel back the veneer of malls and restaurants, there is a real city with real people doing real things. Like most places, those are the qualities that make a city truly great. Palm trees and fruity drinks don’t hurt either.