The Sunday before I left on a solo trip to Israel, we were sitting on the couch watching 60 Minutes and eating some delicious Indian takeout. As I consumed the last morsel of naan a story highlighting the City of David in Jerusalem came on. Whether it was serendipity or Lesley Stahl stalking me on Twitter I can’t be sure, but the timing worried me a bit.

The story started out well, going through the history of the City of David archeological complex in Jerusalem, then it went downhill. Lesley, in her chipper but authoritative tone, gave us the news that the area was a subject of great controversy and, yes, even some violence. Video of kids throwing rocks at cars passing by filled the screen and I looked over at my partner who was not at all amused. I made a halfhearted promise not to visit the City of David or the Silwan neighborhood and left it at that. With so much to do in Jerusalem, surely I could handle skipping one site. That’s until I met Hadar.

It was my last evening in Jerusalem, and I decided to try a restaurant with a little more substance than my normal shawarma or falafel pita. After a lot of wandering, I finally found an Israeli themed restaurant with a decent looking menu at modest prices. Halfway during the meal, a woman and her dining companion came over and asked if I wanted to join them since I was alone. Shocked at the generosity of the moment, I readily accepted and spent a couple of marvelous hours chatting and learning more about my new friends.

The woman, Hadar, was a manager at the City of David site, as luck would have it. We talked a lot about the 60 Minutes piece, which she had seen, and the difficulties in the area. We parted ways that evening with my promise to her that I would tour the site the next morning. I felt bad that I was reneging on my original promise, but I really wanted to visit the site.

Watching the 60 Minutes feature, I would have never guessed that the City of David was as close to the Jerusalem Old City as it is, but it’s almost adjacent to the city walls and very easy to find. I could tell instantly that Silwan was not a normal part of town though, police vans and barricades welcoming me to the area. True to her word, Hadar had arranged for my visit and I excitedly waited for the tour to begin.

To explain the controversy involved with the archeological site would take much more space than I want to devote here, but I’ll try to sum it up in Cliffs Notes fashion. The neighborhood where the site is found is the oldest area of Jerusalem, which many believe to be the original site of King David’s palace and his original capital. Needless to say, such an area is the heart and soul of the Israeli people. So what’s the problem? Well, the neighborhood of Silwan lies in East Jerusalem and is predominantly inhabited by Palestinians, who are not thrilled with the fact that the City of David organization is quietly buying residences around Silwan to either demolish or increase settler presence. That’s all I’m going to say about that, but it is a very sensitive subject. 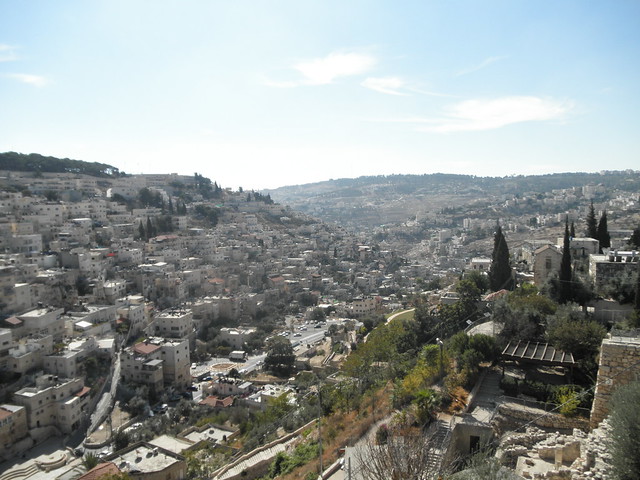 The City of David is an active, ongoing dig site, but they have done a fantastic job of creating an informative and exciting tour. Waiting for the tour to begin, I looked over the Kidron Valley and enjoyed a few moments of rare solitude in the hectic capital city and thought about how such a small area could be such a huge source of controversy.

The tour began with a strange 3-D movie that was a little hokey, but overall informative. After what seemed like an eternity, the tour itself began by descending into the dig area. Maybe it’s because I was looking for it, but the guide seemed to be a little propagandist in her presentation, constantly reaffirming the importance of the site to Israel and making it seem like more has been found than actually has been. While it is believed by many that the City of David is actually, you know, the City of David, nothing has been found to prove that definitively.

The highlight of the tour came at the end, with a walk through the very wet and very dark Hezekiah’s Tunnel. This remarkable walk is through an 8th century aqueduct that was originally built to provide Jerusalem with enough water in case of siege. The tunnel leads from the Gihon Spring to the Pool of Siloam. 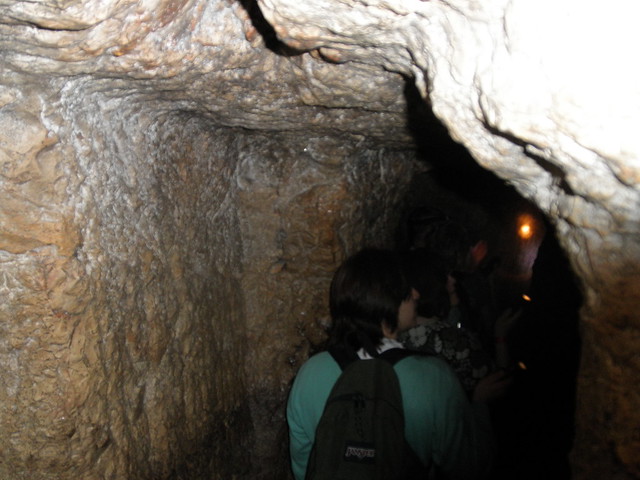 Apparently the guides at the City of David suffer from chronic understatement, as everyone said that the tunnel was somewhat damp and dark. I’m 6’2″ and the water reached my knees in some areas and luckily we were given tiny flashlights to aid the navigation of the pitch black tunnel. If you suffer from claustrophobia, this is not a tour for you, but I recommend it for anyone who has even the slightest of interest. While the 20 minutes or so it took to navigate the tunnel seemed endless, it was a fun adventure walking through the nearly 3,000 year old structure.

I emerged from the tunnel into the bright sunlight, drenched but happy. The tour finished, the group dispersed and we all went our separate ways. I had to leave for Tel Aviv that afternoon, so I went in search of the nearest bus stop. On the ride over, I thought a lot about the City of David and what it meant. More than an archeological site, it’s a true cultural site. I learned about the history of the city, true, but I learned much more about modern Jerusalem than its ancient past.