I sat in the elaborately decorated great room in the Graycliff Hotel in Nassau, playing with my iPhone and glancing at my watch. Even though we were in the heart of the Bahamian port city, the only sound was a bird in the distance and the soft ticking of the clock. I heard loud, forceful footsteps approaching and I looked up to see a great bear of a man. He was older, but not old, and looked like I imagine Harry Potter’s friend Hagrid would seem if I were to meet him in real life.

“You are one of ze bloggers?” he asked as he grasped his meat hooks around my suddenly diminutive hands, “Welcome to my hotel, I am Enrico.”

Enrico Garzaroli is a boisterous, large living Italian who purchased the Graycliff property in the 1970s. The property has been around since the days of pirates and privateers, but it was Enrico and his wife Anna Maria who turned it into a luxurious hotel complex. In addition to the posh hotel, there are two restaurants, a world famous wine cellar and a cigar factory. Graycliff cigars are actually famous in their own right, and are entirely made at the hotel.

I was in the Bahamas as a guest of the Ministry of Tourism and accompanied by several other travel bloggers and writers. After we had assembled in the living room of the grand hotel, Enrico escorted us to the cigar factory for a lesson in cigar rolling.

Walking into the humidor is a sensory overload as the rich aroma of aging tobacco leaves fills the nostrils with their leathery smell. I’m not a big cigar smoker, but the hundreds of cigars were an alluring site to behold. We weren’t just there to look at the cigars, we also had to try making them ourselves.

I knew that cigars were hand rolled, but I must admit that I never paused long enough to consider the process. The rolling room was arranged like a classroom, with rows of desks each one home to an expert roller. I say expert because, as I learned, making a cigar is hard work. 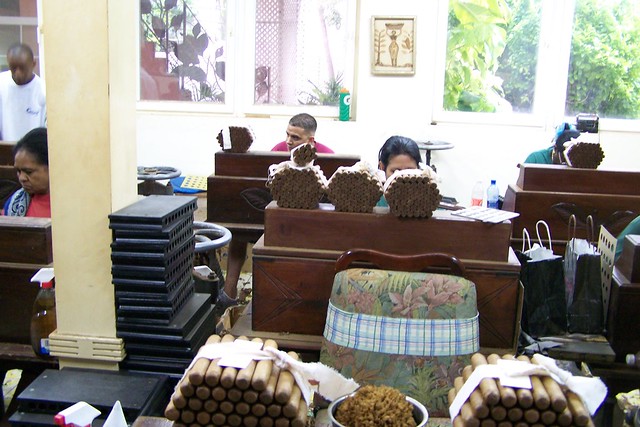 The rollers worked methodically, but quickly, their fingers moving with speed and agility as they cut, rolled and glued the cigars into place. It looked deceptively simple and I thought I would surely have no problem as I sat down with my Cuban partner. I say Cuban, but I have no idea as to his origin, what I do know is that he only spoke Spanish and I had no idea what he was saying as he gave me instructions in the fine art of cigar rolling.

He made me watch him a few times as he cut the tobacco leaves, then rolling them into place. He smiled at me, handed me some leaves and motioned that it was finally my turn.

I’m not sure how much of Enrico’s money I wasted, but it was no small sum. It seems, according to the grumpy stares I was getting from my cigar rolling friend, that I was doing absolutely nothing right. Frustrated, he kept grabbing my hands to demonstrate proper technique and eventually just completed the process himself. I looked around at everyone else, but no one seemed to be having as much trouble as I was. My friend was glancing around too, obviously disappointed that he hadn’t been partnered with one of the female writers.

Finally Enrico appeared, laughing at our feeble attempts and gifting us the results of our labor, since there was no way he could ever sell the poorly constructed cigars. I lit up the tobacco torch, inhaled deeply and let out a sigh of contentment. It may not have been the prettiest cigar, and I managed to annoy some Cubans in the process, but that first puff on my own personal Graycliff was a great introduction to the Bahamas.

11 thoughts on “Rolling Cigars Badly in the Bahamas”