No it’s not a small country in the former Soviet Union, nor is it a far flung province of Afghanistan or even China. While it doesn’t enjoy borders or even many inhabitants, Muristan is one of the most important neighborhoods in world history, found in the ancient city of Jerusalem.

It was early, around seven or so, and the souks in the Old City were a ghost town. I couldn’t believe no one, not a soul, was meandering the mazelike alleys along with me. I had to meet a tour guide for a day trip at the Jaffa Gate, but first I wanted a peek at the Church of the Holy Sepulchre. I arrived only the night before, and other than a quick shawarma, hadn’t done much yet.

The air felt good as I took the stairs two at a time down through the Christian quarter on the way to the Church of the Holy Sepulchre. I must have made a wrong turn, which is more common than actually going the right way in Jerusalem, because in front of me was a church, but not the one I had in mind. I looked around, and noticed a small gated recess next to the church. Intrigued as to why a plaque would be under lock and key, I squinted through the bars and instantly realized where I was – I had found Muristan.

I consider myself spiritual rather than religious, but something has to be said for the phenomenon that no fewer than seven hospitals have been located on the same site south of the Church of the Holy Sepulchre for more than two-thousand years. Whatever mysterious forces may be influencing the presence of a hospital in Muristan, what can’t be doubted is the importance the area has had for centuries.

On the gate surrounding the well guarded plaque next to the Church of the Holy Redeemer is a simple eight-pointed cross, the Maltese Cross. Further proving my ‘funster’ status, researching the group most often associated with the strange Maltese Cross has long been a hobby, and I was thrilled to have inadvertently found the original home of the Knights Hospitalers of St. John. The Hospitalers were a sect of Crusader knights similar in nature to the Templars, but their role in the Muristan has been key to its ongoing importance. 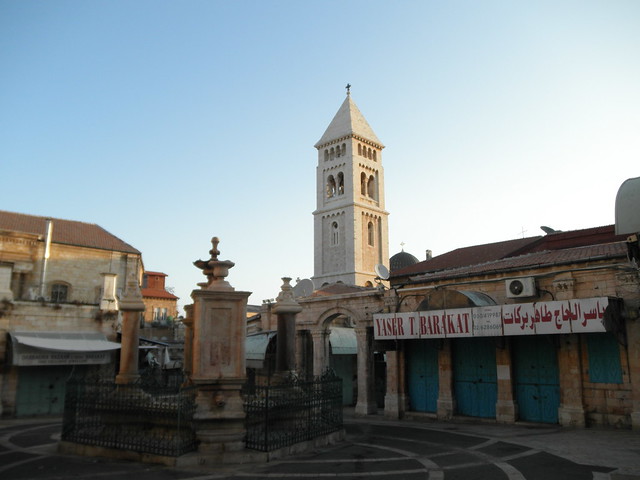 Jerusalem has been built, razed, rebuilt, plundered, and burned again countless times over its seemingly ageless history. During one of these cycles in the 11th century, a group of well-to-do merchants from the posh port city of Amalfi, Italy, arrived with the intention of building a hospital in Muristan, just a stone’s throw from the Church of the Holy Sepulchre. Theirs was not an original idea, hospitals had been there off and on since the days of the Roman-Jewish wars, but this time the reconstruction would take on new importance and longevity.

Almost immediately of course, the city was invaded yet again, the Hospital was plundered and the Church of the Holy Sepulchre nearly destroyed. Yet the hospital endured until an unremarkable Augustine monk, Brother Gerard, was put in charge of the complex. This simple act had reverberations that would ripple through history.

Walking past the souks, I turned a corner and could see the Holy Sepulchre a few meters ahead, I glanced to my left though and noticed an oddly ornate archway leading back into the Muristan. Not that odd, I suppose, since remnants of long lost civilizations are found throughout the city, but it just seemed out of place. I later learned that I had found one of the last remnants of the Crusader hospital.

Brother Gerard wasn’t a simple monk, he was a man with ambition. The hospital received a gift of a steady revenue stream from which they accumulated great wealth. Soon, Brother Gerard organized the Fratres Hospitalarii into a regularly constituted Religious Order under the protection of St. John. The members of the Order thus became known as Knights of St. John Hospitalers, whose battle standard of the eight-pointed cross I had found earlier that morning.

Like all things in Jerusalem, the Knights’ presence in the Holy City was short lived, and after a 12th century siege, the Order of healing knights was forced out. It was during this time that the quarter obtained its name, Muristan. Sultan Saladin created a lunatic asylum on the premises of the Crusader hospital, Muristan a bastardization of the Persian term for hospital or asylum.

Without home or purpose, the Knights left Jerusalem and went on to inhabit areas on Cyprus, Rhodes and finally Malta, where they are to this day known as the Knights of Malta. Interestingly enough, the eight-pointed cross of the original Knights is today known as the Maltese Cross.

I circled back up the alleys, passed by a large fountain and once again stood in front of the Lutheran Church of the Holy Redeemer, the latest occupant on the ancient property. Finally the neighborhood was starting to awaken, the sounds of trucks delivering goods to the souks could be heard in the distance.

The Holy Redeemer, a relative newcomer to the neighborhood, was built by Kaiser Wilhelm in the 19th century. The Germans didn’t totally disregard the history of healing and created a small hospice adjacent to the church. Today, a walk through the property reveals homage paid to the Knights in the form of Maltese Cross insignias found throughout the church compound.

As a side note, the Amalfi connection  remains constant, the region is apparently very proud of its religious ancestors. If you visit Amalfi, Italy, you will see the famous eight-pointed cross of the Knights still present in the city’s crest.

I continued on, still alone in the souks, and somehow found my way back through the alleys to the Jaffa Gate, one of the main entrances to the Old City of Jerusalem. Regardless of its history, most visitors to the Muristan don’t realize the importance of the neighborhood through which they pass on their way to the Church of the Holy Sepulchre. There are a few reminders of the area’s past though, the Crusader archway and the small plaque and cross found next to the Church of the Holy Redeemer still honor the neighborhood’s history.

More than anything else, the time I spent in Muristan not only reinforced how little I sometimes know about the places I visit, but the incredible history found in even the most humble of sites around the world.

1 thought on “A Visit to Forgotten Muristan”