Jerusalem has many important sites, both in historical and religious contexts, usually a combination of both. The three great monotheistic religions of the world, Christianity, Judaism and Islam, each claim the city as holy and have corresponding sites of importance in the great capital of antiquity. Of these the most enigmatic is without doubt the Temple Mount.

Simply put, the Temple Mount just may be the most holy site in the world. According to Judaism, the Temple Mount is where God created the world, where life was breathed into Adam and where the two great temples once stood. It is also home to the Divine Presence, giving great importance to the Temples and why the site remains holy today. The Kotel, or Western Wall, is the last remaining vestige of the ancient Temple complex, thus the site of pilgrimage for many Jews. The site is important in the Christian faith for the role it played in Jesus’ life as well as being the site of the Second Coming. Finally, Islam considers the site its third most holy for being the location of Muhammad’s journey to Jerusalem and ascent to heaven. On the Mount are the Al Aqsa Mosque and the Dome of the Rock. The area is revered by all three religions because of the presence of the Dome of the Rock, inside of which sits the Foundation Stone, which is also believed to be the altar on which Abraham bound his son Isaac.

Due to this importance across the three religions, the site has been, and continues to be, a source of great tension and debate. Israel has controlled the site, indeed the entire city of Jerusalem, since the Six-Day War, but the Temple Mount is managed by an Islamic Council. Because the location of the Holy of Holies remains unknown, Israel’s Chief Rabbis have long maintained that it is forbidden for Jews to enter the Temple Mount, although it still remains a topic of debate amongst religious authorities. 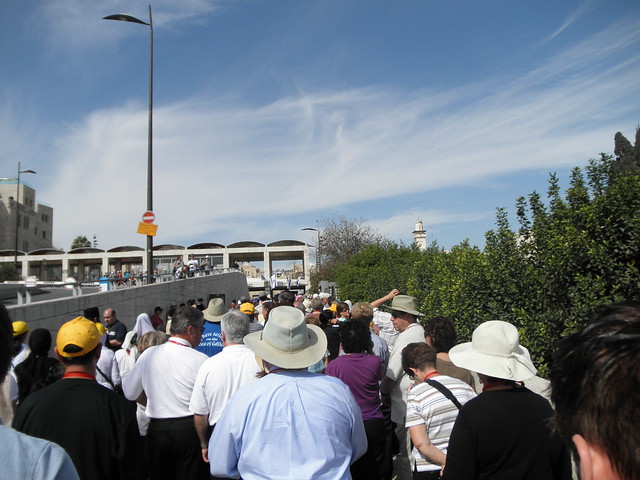 Unlike the Kotel or the Church of the Holy Sepulchre, the Temple Mount complex is not always open and many of the buildings contained on the site are verboten to non-Muslims. When I visited it was open to tourists from 7:30-11:00 am and 1:30-2:30 pm, although check once you arrive in Jerusalem.

Given the limited visitation times, the entrance line can be quite long, I waited about 45 minutes to gain entry into the holy site. Honestly, Temple Mount wasn’t what I expected, although I’m not sure what I thought it would be like. The top is a large open area, with a smattering of buildings, benches and kiosks. The two most important structures are the revered Al-Aqsa Mosque and the Dome of the Rock, which sits opposite the mosque. 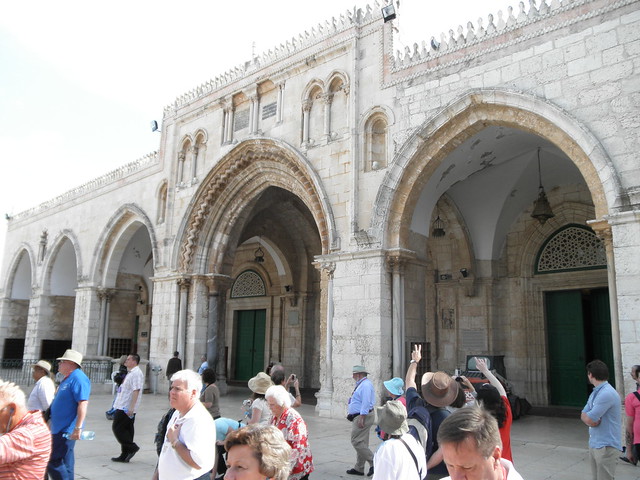 I walked up to the mosque, not sure of the protocol, but hoping for admittance. Policies on non-Muslims entering mosques vary around the region, in Turkey it was allowed, but against the rules in Morocco. It didn’t take long for someone to quickly approach me though and point me away from the building. Apparently Al-Aqsa followed the Moroccan example. Disappointed, but understanding, I followed the directions and wandered across the courtyard to the massive Dome of the Rock.

No skyline photo of Jerusalem is complete without inclusion of the colorful, gilded Dome of the Rock. To stand in front of this iconic structure was even more impressive than I could have imagined, the sun shining brightly off of the golden dome. 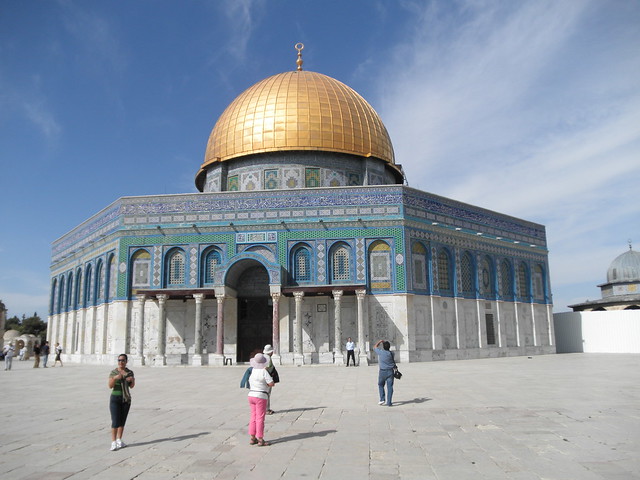 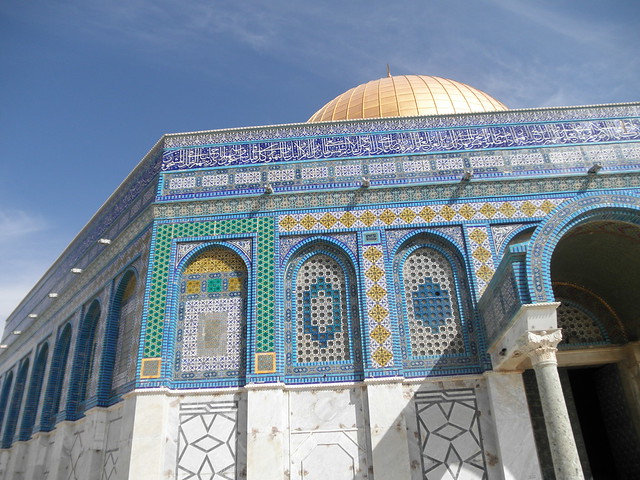 After taking photos from every possible angle, I decided to try to enter the building. Given the importance of the site to the three religions, I thought for sure they would let me in. Non-Christians can enter the Church of the Holy Sepulchre, non-Jews can pray at the Kotel so I thought gaining entry into the Dome of the Rock would be easy. I thought wrong.

I was abruptly, and rudely told to go away. I took one look at the guy’s expression and knew a debate wouldn’t accomplish much, so I moped away, looking back at the guard like a sad puppy – all with no effect.

While I can appreciate the fact that it is a religious site and they don’t want thousands of people wandering through the building, I personally don’t think it’s right to close off the Dome of the Rock to non-Muslims. Any other mosque in the world I agree with, but not this one. It’s important to my religion too, so why can’t I enter and pay homage in the same way as anyone else?

I wandered about the Temple Mount for a few more minutes, admiring the views of the city and the nearby Mt. of Olives before leaving, fairly dejected. I’m glad I got to visit the site, but I don’t feel like I actually visited it. Maybe someday the religious authorities will once again allow the People of the Book admittance to this site of mutual importance, until then at least I have my unvisit.

22 thoughts on “My Unvisit to the Temple Mount”