It was hot, I was hungry and there were still thirty minutes to kill at the Ahava Temptation tourist depot in Jericho. I signed up with a tour group of seven others for a day-long trip around areas of Israel and the West Bank, the tour a necessary evil given my short time in the country.

The Ahava cattle station, sponsored by the mega cosmetics brand Ahava, was quite possibly the tackiest tourist trap I’ve ever visited. They didn’t even care that everyone knew it was a tourist trap. They completely owned up to the fact that they want to take as much money from visitors as possible, in exchange for t-shirts that say “Holy Rock Cafe” and “Jesus slept here,” or some such awfulness. It was well into the afternoon, lunch had still not appeared and I was cranky, very cranky. The only food options in the Ahava “Buy Some Dead Sea Mud” Center was a massively overpriced buffet with food that looked like it belonged in a Sarasota retirement home.

So instead of perusing the tacky shirts or endless rows of ceramics, I sat outside with a bag of roasted nuts staring at the cable car leaving the tourist center for a birds eye view of, well the tourist center I guess. As I was sitting there staring at the sheep, er tourists, shuttling about with their brand new plates and Jesus bobble head dolls, I noticed the entrance to the Jericho archeological site. 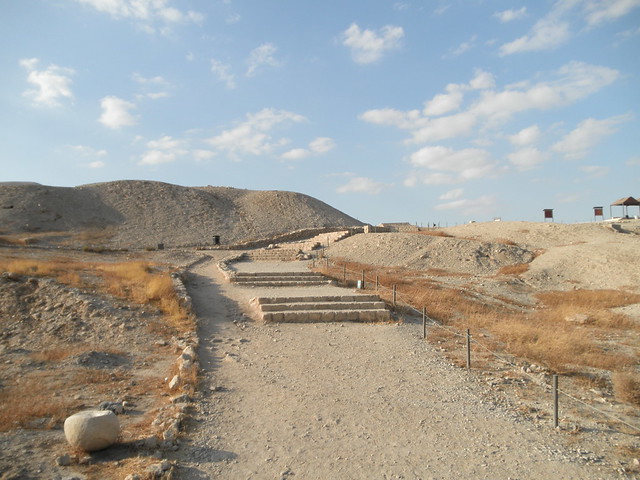 Jericho is an ancient city; everyone knows the stories from the Bible when its famous walls came a tumblin’ down. There is a modern Jericho however, a fairly large town in the West Bank that has no relationship to the ancient site, other than its name. No one is really sure where the entirety of the ancient city ran, but apparently at the Ahava tourist morgue they have found at least a portion.

I love archeology and for whatever reason ruins fascinate me. I paid my ten shekels, walked up the ramp and was met not with an exquisite archeological site, but rather by mounds of dirt. To be more exact, a series of dirt piles with no explanation and a partially rotted rope designating the trail. Now why couldn’t Ahava sponsor some site management instead of a new mud kiosk? Never mind, I know the answer.

Dejected, I walked back to the van and waited to depart for the next stop on the West Bank tour. We were nearing the end of the day and I was exhausted. Never underestimate the hot desert sun and how much energy it can sap from even the heartiest of travelers. Unfortunately, I’m not a particularly hearty individual, so I was ready for a well deserved nap. 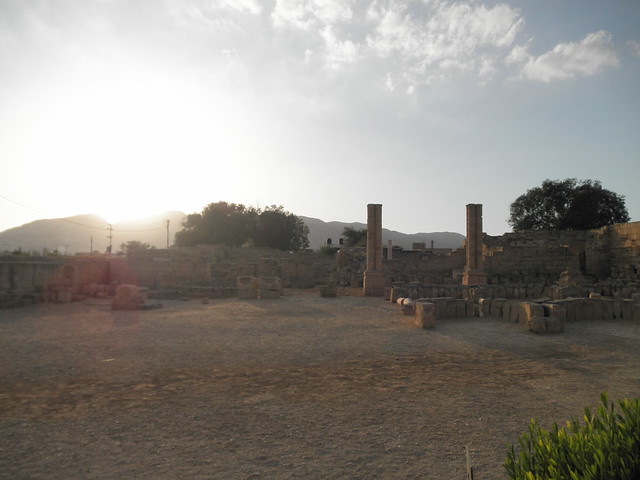 After a brief drive we stopped in front of a small building and some sort of area enclosed by a fence. I walked over to the sign indicating both that it was Hisham’s Palace and that USAID had helped pay for its interpretation. The guide looked over and asked if we wanted to go in. About half of us said yes, while the backpacking teens decided to take a nap. I kind of envied the backpacking teens.

After the Jericho experience, I wasn’t expecting much and at first that’s what I got. I paid another ten shekels and was told that the movie would start in 15 minutes. Movie? Well hell, that was a good sign. Only fancy places have movies. 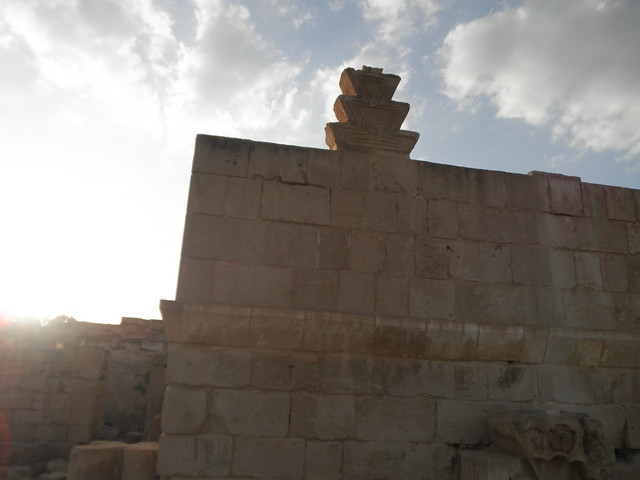 The sun was setting and the desert was finally starting to cool as I walked around the large site, rubble strewn around like Lincoln Logs. I can just imagine how many people must have looted this once glorious complex over the centuries leaving it what it is today, fallen marble pillars and a few standing walls.

Hisham’s Palace was built by the massive Umayyad empire in the 8th century. The Umayyads were a force with which to be reckoned in their time, and I remember seeing beautiful examples of their architecture in Marrakech. One of the highlights of Hisham’s Palace is a well preserved hexagonal star window, which was originally placed high in the upper window of the palace.

I chatted with one of the caretakers after the surprisingly good film, who said the site has a lot of challenges. Jericho is forever growing and stone looters are always damaging the site, as they have for centuries. There’s not enough money to properly preserve the site and in fact most of its best pieces, the famous mosaics, were removed to museums in Jerusalem for their safety. The caretaker was worried about the future of the site and their ability to preserve an important part of their history. In a young pseudo-nation such as the Palestinian Authority, basic community concerns are important, but so is preserving their shared past.

On the ride back to Jerusalem, I couldn’t stop thinking about the rubble, the best term for the poorly maintained sites, and what they mean for the region. There’s not much we can do to help preserve these remarkable sites except to suck it up, pay our ten shekels and just hope that enough people do the same so that these last remnants of a proud history don’t disappear forever.

3 thoughts on “The Best Rubble in Palestine”