I had several goals while visiting Lana’i as part of the Lana’i Visitor’s Bureau New Media Artist in Residence Program. One of those goals was to find corners of the island that not everyone explores and to see more of the natural beauty that defines Lanai as a Hawaiian treasure. These guiding travel principles led me to a five mile hike along the Koloiki Ridge Trail.

I had a few hours of alone time while Scott was golfing, and decided to head out on the trail which starts near the Four Seasons Lodge at Koele. I of course wanted to see the beautiful views promised in my brochure, but as I wrote about earlier, I was also tracking the elusive mouflon, the rare Lanai mountain goat.

If you plan on hiking the trail, there are some precautions you need to observe. Check with the hotel concierge about trail conditions. In the wet season certain portions of the trail become impassible at best and very dangerous at worst. Also let them know where you are going and when. That way someone will know your whereabouts should something happen on the trail. The hike takes several hours, so take a daypack with water and snacks to keep you going along the way. 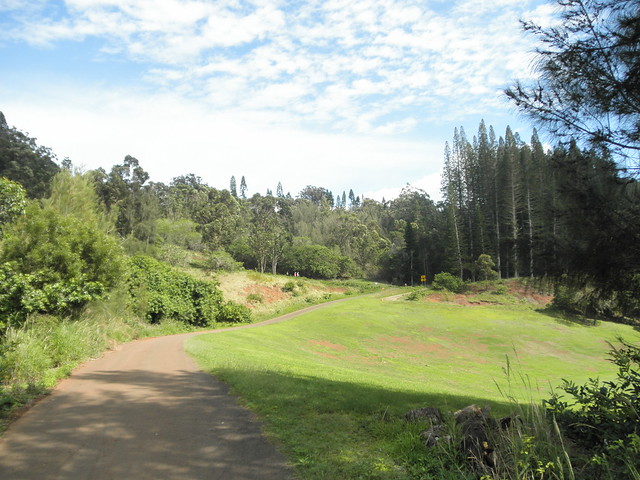 The morning fog had lifted in the Lanai highlands as I walked the short distance from Koele to the start of the Koloiki trail. The caretakers have done a great job marking key points on the trail with red and while signs so that directionally handicapped hikers, like myself, don’t get lost along the way.

The first marker is located at the Experience at Koele Clubhouse, directing the hiker along the path towards the signature 17th hole. The course was closed that day, so I didn’t have to worry about golf balls whizzing past my head, but you should always be aware of where golfers are before crossing any fairway. Continue along the asphalt path until you reach the third marker at the entrance to a thick stand of Cook Pines known as “The Cathedral of Trees.”

In all honesty, this part of the trail is pretty boring. It’s just the prelude though, soon the trail becomes much more interesting as you leave the pavement and enter into the dense forest. The next two markers are set at forks in the road, where you take the left path each time. Finally you pass by huge water tanks and then the trail narrows as it meanders through a thick copse of trees until you reach a steep hill marked by Guava trees. Be very careful navigating the hill, especially if there has been rain recently. When I was there courtesy hiking poles were propped up against a tree, an act of kindness that prevented a tumble down the hill.

The 9th marker indicates the start of the actual nature part of the nature hike as you turn left on a dirt path that once served as the service road for the tunnels that carry drinking water from Maunelei Gulch to Lanai City. This portion of the trail is a straight shot through a thick forest, fallen trees at times blocking the way. Even though I didn’t see any, be on the lookout for the skittish axis deer as they forage for food. There are more deer than people on Lanai, so there’s a good chance you’ll spot at least one. 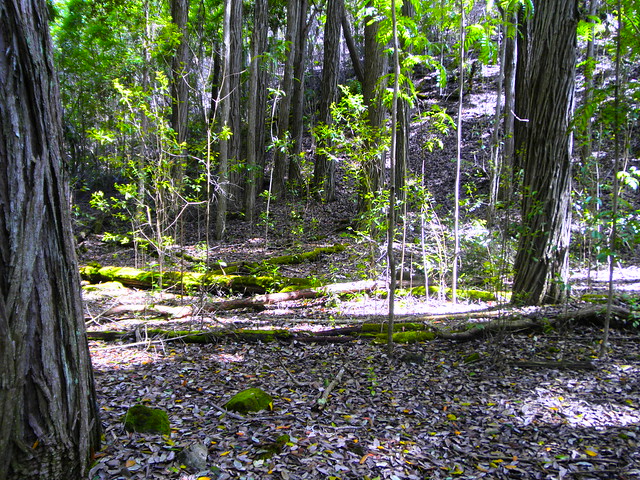 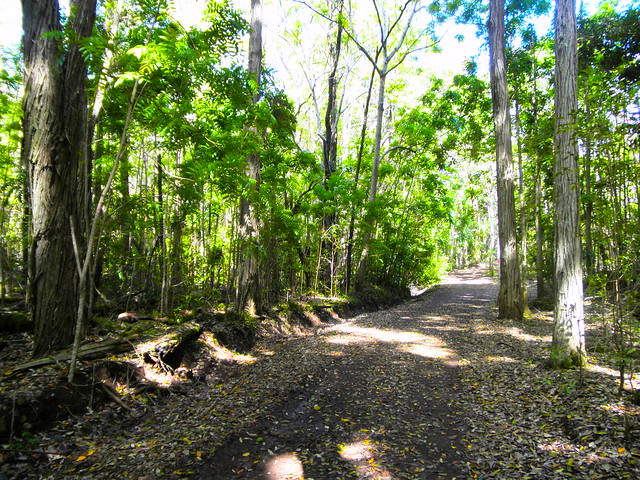 At the end of the dirt road you come to the intersection with the Munro Trail, one of the most important trails on the island. The seven mile dirt trail is popular for offroaders, so listen for the sound of impending Jeeps barreling down the single lane road. 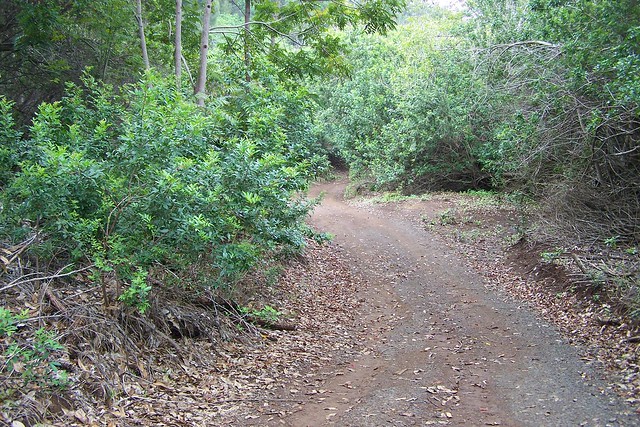 The hike follows the Munro Trail for a while, past groves of Kukui nut trees, yellow ginger plants and Ironwood trees. Pause for a moment on the trail and just stop to listen. The faint rustle of leaves, the distant roar of the ocean and the occasional bird chirping all create a bucolic symphony as you enjoy one of the hardest to reach areas on the island. 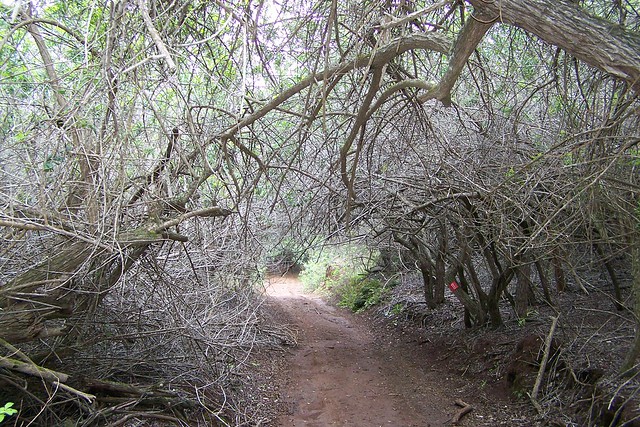 When you reach marker #17 on your left, turn off the Munro Trail and begin the sojourn to the star of the hike, Koloiki Ridge. After walking through a thick stand of trees, their branches forming a thick leafy roof overhead, I emerged from the deciduous forest into a completely different landscape. The rock outcroppings and dusty trail were more like the Garden of the Gods than a proper forest. This was the point where I realized the mouflon might be nearby, well suited for the steep, rocky terrain. 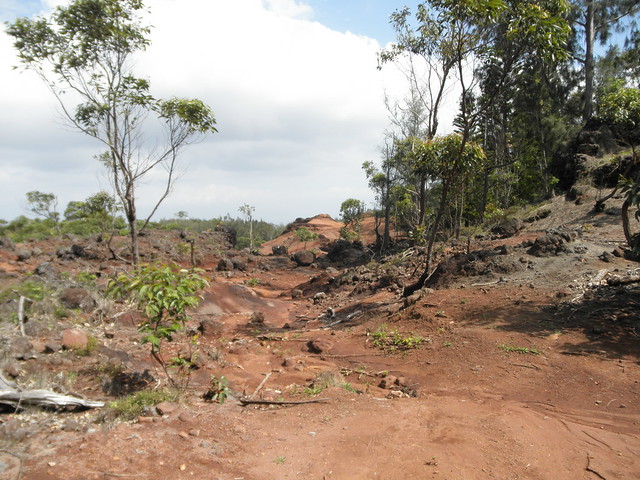 After a brief hike through the moonscape, I emerged into a stunning display of nature’s beauty, Koloiki Ridge. The ridge extends towards the ocean, separating the Naio and Maunalei Gulches. Not only is this area important for its natural beauty, but it once played an important role in the history of Lanai. 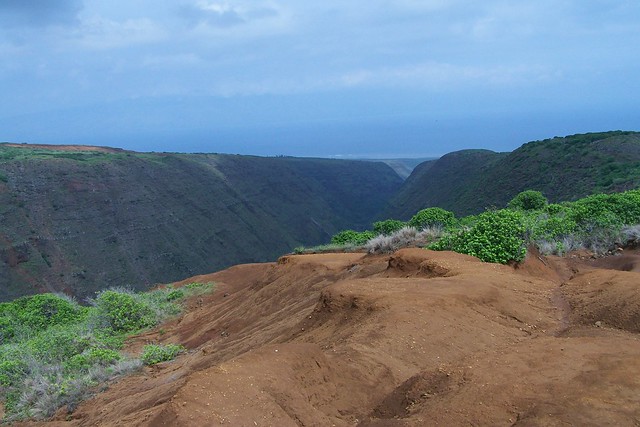 The Naio Gulch to the left is home to the Naio tree, a scented wood that is similar to sandalwood. The Maunalei Gulch to the right was where the ancient Hawaiians cultivated taro, a staple of the Hawaiian diet. The Ridge area was also the site of a fierce 18th century battle when forces from the Big Island arrived to lay siege to Lanai. The Lanai warriors were eventually starved out and succumbed to the invaders, but you can still see evidence of their fortifications in the sides of the cliffs below. 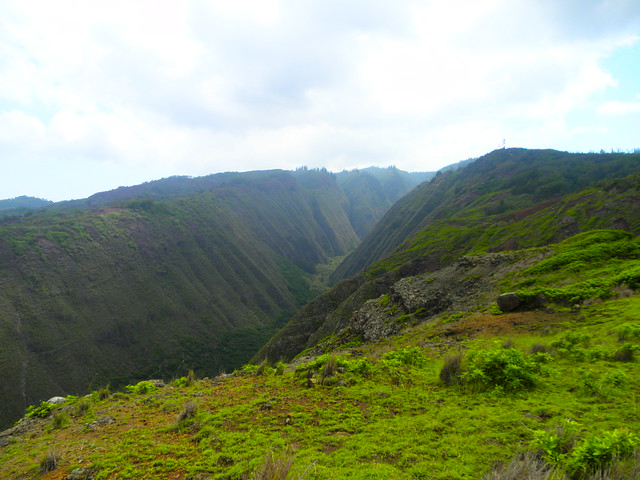 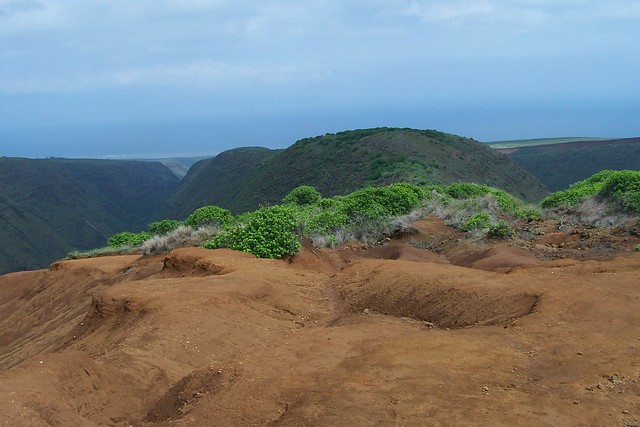 Staring off into the distance, both Maui and Molokai are visible on a clear day and the scene which unfolds below is simply stunning. I’m not sure how long I stood there, marveling at the beauty of the landscape, but I could have spent all day paying homage to the impressive display. I walked around the top of the ridge, eyeing the gulches as they lead into the ocean from every vantage point before collecting my things and making the long trek back to the hotel.

The walk back to Koele was speedy and before I knew it, I was back at the Lodge, sweaty and dirty but otherwise none the worse for wear. The trail can be strenuous at times and most people don’t even know about it, but it is one of the most remarkable activities available on the small island of Lanai.

8 thoughts on “Hiking the Koloiki Ridge Trail in Lanai”