A few weeks before leaving on my trip to Lana’i as a participant in the Lanaʻi Visitor’s Bureau New-Media-Artist-in-Residence Program, I was asked if I wanted to SCUBA dive while on the island. I love any water related activity, but I’m not SCUBA certified, although I have long contemplated the process. I reluctantly gave my regrets, but asked if I could try something else I found during my research, SNUBA. 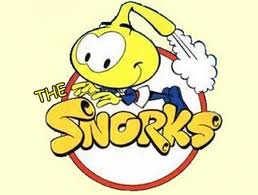 When I first heard the word SNUBA, my mind instantly raced to the 1980s cartoon, The Snorks. I didn’t fully understand how the process worked and how it was different from either snorkeling or SCUBA, the root words of SNUBA. After riding myself of the Snorks imagery, I then imagined a 20,000 Leagues Under the Sea style diving apparatus, with a cautious diver venturing out into the ocean connected to life only by a thin hose. Turns out I was almost right.

I left the hotel at Manele Bay and walked down the beach to “the other” end. The beach on Hulopoe Bay is shared, the Four Seasons uses part of it and the other side is open to the public. Several days a week a large boat of day-trippers from Maui arrives, unloading the hoards to visit the mysterious island of Lana’i and enjoy the legendary seclusion. Amongst the throng of non-Lanaians were employees of the company coordinating the SNUBA adventure, Sail Trilogy.

It felt like I had walked onto the set of Baywatch, all of the Trilogy employees were young, male, in a swimsuit uniform and looked as if they belonged on the cover of Men’s Fitness. Tossing aside my reservations and insecurities, I sat through the brief tutorial and prepared to embark on my first SNUBA experience.

In a nutshell, here’s the process. At first the preparations were the same as for snorkeling, both mask and fins are donned. That’s where the similarities end. The guide then outfitted me with an air regulator, which would later be attached to air tanks on a small raft. We entered the water with our floating tanks and once in the water, the guide connected us to the tanks. It was very similar to what I imagined, my air supply was connected via thin tubes to the surface. The similarities to a 19th century novel did not assuage my fears.

I love snorkeling and have spent hours in the water exploring some of the most beautiful marine reserves in the world. Yeah, that’s not really what SNUBA was like. At first I couldn’t mentally resolve the idea that I wasn’t snorkeling, so I just floated atop the water as I would normally. The guide quickly let me know that I was a dumbass, so I attempted to descend into the watery depths below. That’s when I started to freak out.

No matter how hard I tried, I could not resolve the idea that it was ok to breathe underwater. I immediately started hyperventilating and had to head back to the surface. Around me young children and centenarians were giddily enjoying their experience, while I, in the supposed prime of my life languished atop the water.

Again and again I tried, until finally I was able to relax, slow down my breathing and swim down to the ocean floor. I seemed ok, until the guide pointed to a Moray eel, prompting bad memories of an encounter I had in the Caribbean and of course, more hyperventilating.

I made it to the top, huffing, puffing and completely exhausted. No matter how hard I tried, I couldn’t get past the natural instinct that humans are not supposed to breathe under water. I felt like I was drowning. I had barely used any of my compressed air and the guide seemed surprised when I motioned that I wanted to return to the safety of the beach. I slogged through the strong waves at Hulopoe and collapsed on the beach, taking a moment to catch my breath.

It’s true, SNUBA was not the highlight of my trip, but it helped convince me that perhaps I’m not cut out for SCUBA after all. Maybe I was meant to just float gingerly atop the surface with my mask and fins, which is just fine with me.

Has there ever been an experience you thought you would love, but ended up not liking?