A couple of weeks ago I listed my favorite travel iPad apps for general travel. Since then I’ve been asked to highlight some other travel apps, so today I’m starting with my favorite airline apps for the iPhone and iPad.

In reviewing all of the available airlines apps, several things surprised me. First, I was surprised at the airlines that don’t have any apps whatsoever; I’m looking at you US Airways. In today’s world, where more and more people are using mobile devices to access the internet, there is absolutely no excuse not to have an app of some sort. The next thing that surprised me was how some major companies seemed to not put a lot of thought into their apps. Maybe they don’t realize that this is how they will be represented to anyone with a handheld device, but some apps either didn’t look good, weren’t user friendly or didn’t provide enough tools for the user. Finally, very few airlines have so far made iPad friendly apps. I understand that it is more convenient to use an iPhone at the airport but, if done properly, the apps shouldn’t just be used as a virtual boarding pass. Ideally they should be one-stop shopping for all of the user’s flying needs.

Without further ado or complaining, here are my five favorite airline apps.

1. Cathay Pacific – Without any doubt, this is the best airline app out there. Rather than just create a portal allowing the passenger to check their flight status, Cathay Pacific has developed an extraordinary all-purpose travel app. The first thing that jumps out are the superb and engaging graphics. Simply said, the app is gorgeous. The app allows the user to check in, check status, manage bookings, etc., but it goes far beyond that. The best feature of the app is the comprehensive city guides. You can select from dozens of destinations to learn more about the sights, dining, hotels and much more. Essentially, it’s a really good travel guide app in addition to being useful for flying. I don’t anticipate flying with Cathay anytime in the near future, but the app is one of my favorites for the guide feature.

2. Delta – When I first wrote my review of top apps by airlines, Delta didn’t even make the list. Since they redesigned the app though, it has quickly risen to amongst the best airline apps on the market. First and most importantly, this app is very easy to use. Just log in with your SkyMiles number (or continue as a guest if you don’t have one) and you can access your account, trips, and anything else you might need. They’ve even added a new feature that I love, a bag tracker. Just type in your bag tag number and you can see where your luggage is and if it’s traveling with you or not. No more praying and hoping as you stand by the luggage carousel. They’ve also included standard information on airports and the Delta Sky Clubs, as well as a parking reminder. It’s a feature that allows the user to save the location of their car as a written reminder or a geotag. Simple but brilliant. This app has quickly become one of my favorite airline apps. 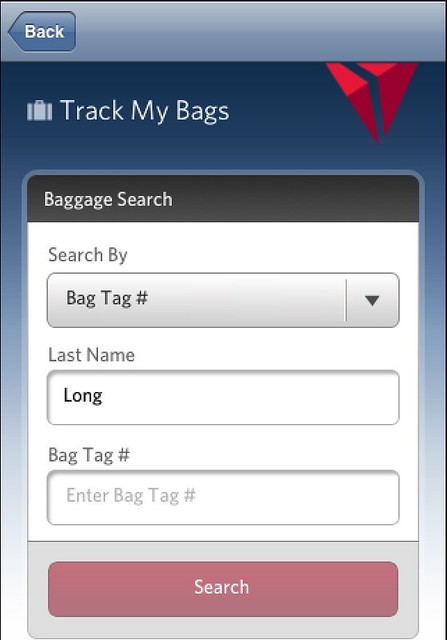 3. American Airlines – American is one of the few airlines to offer both iPhone and iPad apps, and both are perfect travel complements. One key feature that I like, and which many apps don’t provide, are ways to book flights without leaving the app itself. When I use an app I want convenience, I don’t want it just to be a façade for a link to their site, I want a fully functioning app! American also offers several extras, including a fun AA Sudoku game.

4. United – While they don’t have an iPad version of their app, I really like what they have done for the iPhone. They have what I consider to be standard: check in, flight status and so on. But they also have an in-app booking process and airport maps. Beyond this, I love their extras including: flight status push notifications, currency converter, games and links to their social media feeds. Several airline apps have links to their Twitter and Facebook accounts and even their blogs. This is a fantastic way of going beyond a simple app and instead making an integrated, social media tool. 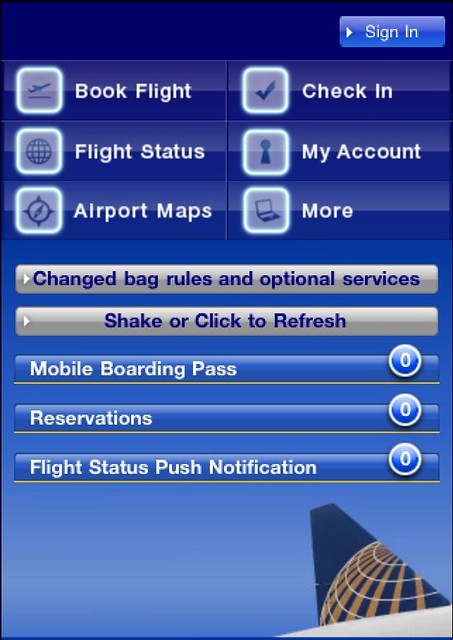 5. Southwest – Southwest has long had a reputation for being the cool kid on the block, and their app reinforces that image. They don’t have an iPad app, but their one for the iPhone offers everything a passenger might need. They have the normal tools, but also link to their DING! Fare Alerts and even enable the user to make air and car reservations. I was a little surprised that they don’t interconnect with their social media accounts, but hopefully that will be in a future version.