I’m not a religious person in the traditional sense, although I would certainly say I have my spiritual moments. But for some reason when I travel I always find myself drawn to areas of religious importance. A visit to the Virgin Mary’s house, or Mother Mary as she is called in Turkey, was an unintended stop, but one I’m glad we made.

According to the story, in the early 19th century, a German nun had a variety of visions about the Holy Mother. Included in these visions was the revelation that her final resting place was on a hill in Turkey near the ancient city of Ephesus, which had not been discovered at the time. Although the nun had never traveled outside of Germany before, nor had she any knowledge of the Ephesus area, she accurately described the exact area where the house was found in the 1880s.

Today’s structure was completed in the 1950s, although it was built upon the foundations of the ruins found in the 19th century. A red line encircling the building designates the modern construction.

While the Catholic Church has never pronounced on the authenticity of the house, it remains a key pilgrimage site for Catholics. It also has significance for Muslim pilgrims given the emphasis placed on the Virgin Mary in the Qur’an.

Regardless of whether or not this is the actual house where Mother Mary spent her final years, it is an amazing historical find which millions visit each year in order to may homage.

What was most amazing to me was the wall of prayers, comprised of thousands of scraps of paper, each one a prayer left there by a visitor.

Regardless of one’s religious proclivities, it is hard not to be moved by a site that so many find sacred. 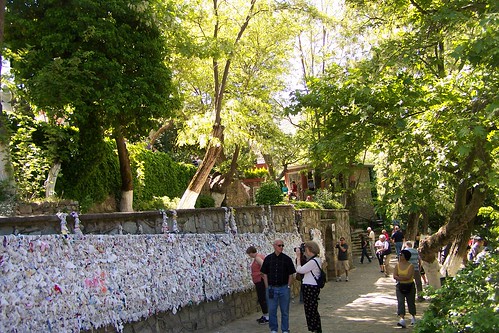 16 thoughts on “House of the Virgin Mary – Ephesus, Turkey”