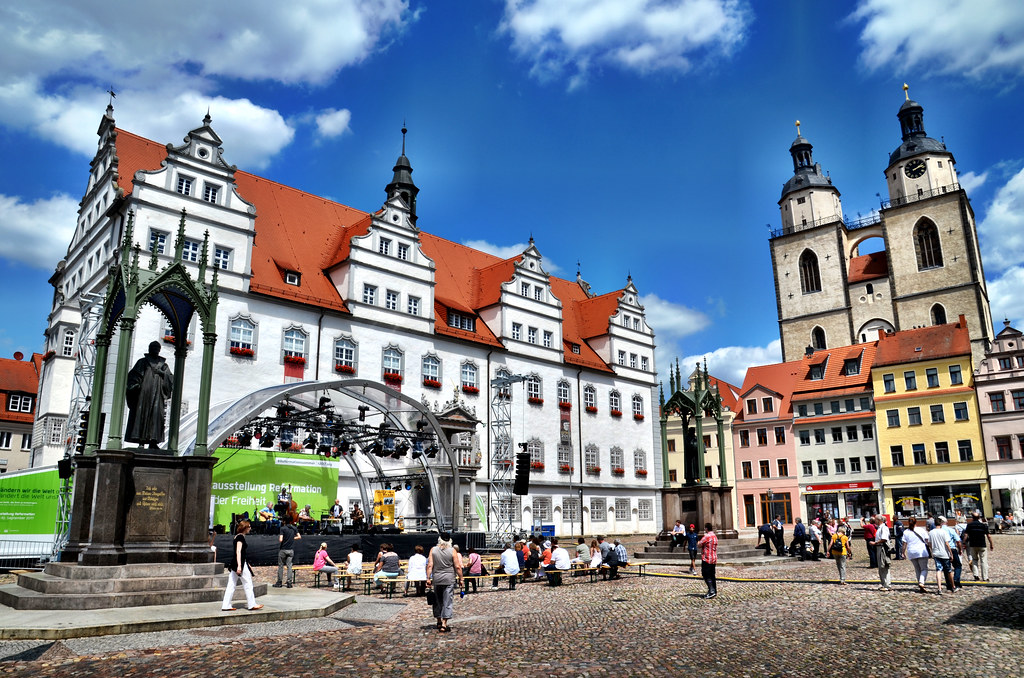 As soon as I got off the train in Wittenberg, I knew things there would be different. Immediately in front of me was a massive, multi-story replica of the Bible, a testament to the city’s near preoccupation with a certain man. In 1517, Martin Luther famously nailed his 95 theses to the door of the Castle Church, in the process creating Protestantism and forever changing Western Civilization. As the birthplace of the Protestant Reformation, Wittenberg is ground zero in this, the 500th anniversary year of that important event and was the best place for me to start my own Luther journey through Germany. From Luther-themed burgers to high-tech reenactments, Wittenberg certainly didn’t disappoint in my primer to all things Luther. 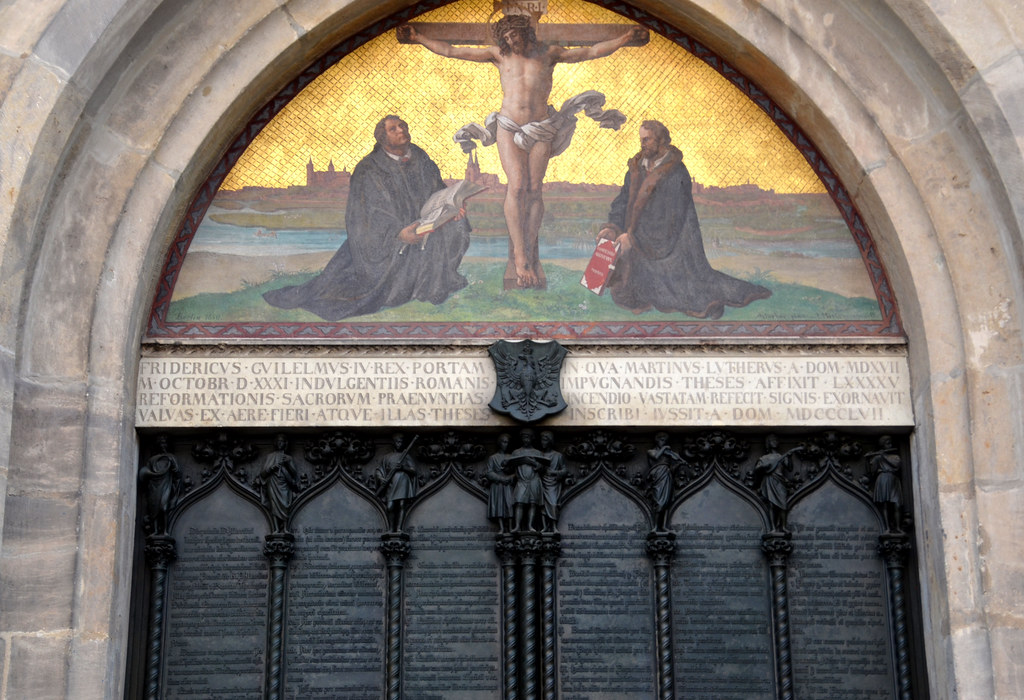 It’s hard for us to imagine what life was like in 1517. Not quite the Dark Ages but not yet the Renaissance, the world into which Martin Luther emerged wasn’t really a fun place to be. Religious practices were also incredibly different from what we know today and instead of sharing the gospels, religious texts and knowledge were reserved for only a privileged few. Once Martin Luther began to read the original Greek and Hebrew versions of the Bible though, he saw a version of Christianity far different than the one practiced in the 16th century. After 1,500 years of human greed and quest for power, the Catholic Church at the time had some problems, to be diplomatic about it. Luther wasn’t the first to point out the human flaws within the hierarchy of the church, but his actions were the first to create widespread change. Writing and then making public his famous 95 theses, he decried the practice of selling indulgences and of elevating saints to positions not dictated by the Bible. He wanted to get back to basics, to the original intention of Christianity, although at the time I’m sure he had no idea the trouble he was about to create. But it all happened first here in Wittenberg. It’s where he lived, where he preached, where he published those theses and, ultimately, where Protestantism started. In the City Church he gave more than 2,000 sermons and in that same church the world saw the first ever Protestant church service. History is alive here, it’s powerful and I was excited to experience it all firsthand.

Luther socks. Luther hamburgers. Luther wine. Luther rubber duckies. Luther gingerbread. All of this and more is for sale today in Wittenberg, a city that hasn’t just embraced this, the 500th anniversary of the Reformation, it’s reveling in it. Aside from the crass commercialism though (I’m pretty sure Luther wouldn’t be happy with the socks) the city has done an amazing job at reimagining the historic sites around the city and making it easy for tourists to discover both the life and times of Luther, as well as Wittenberg, on their own. I have to admit, I was a little dubious at first as to whether or not Luther was enough to attract tourists, but almost right away I realized those doubts were unfounded. The city was packed with people that sunny Saturday morning, a mix of locals and tourists all out and about excited to enjoy the day. There were also more Americans roaming the streets than in most other German cities I’ve visited and, after asking a few about their travel plans, I learned that they were all there for one reason – Martin Luther. Turns out the anniversary of the Reformation is a good enough reason for many folks to travel to Germany, to visit the cities, towns and sites important in his life and to reconnect with their own faith. While not religious myself, I had to admire their zeal and excitement. That’s actually a good word for it, excitement. They were thrilled to be retracing the steps of the man who founded their faith, to be a part of something larger than themselves and, even for an agnostic like myself, that energy was contagious. 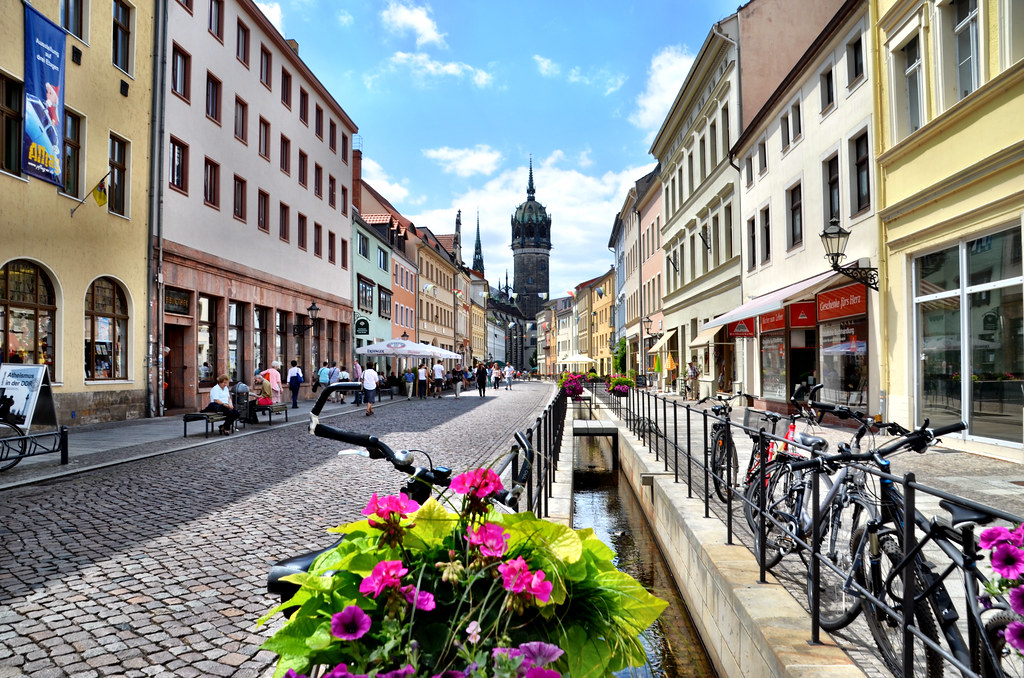 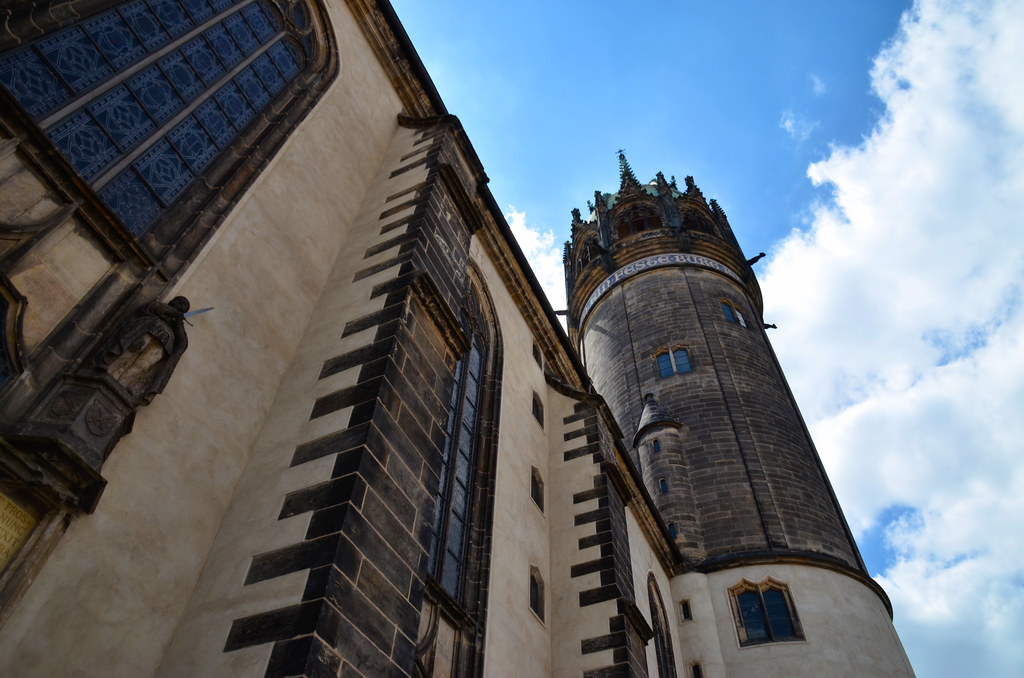 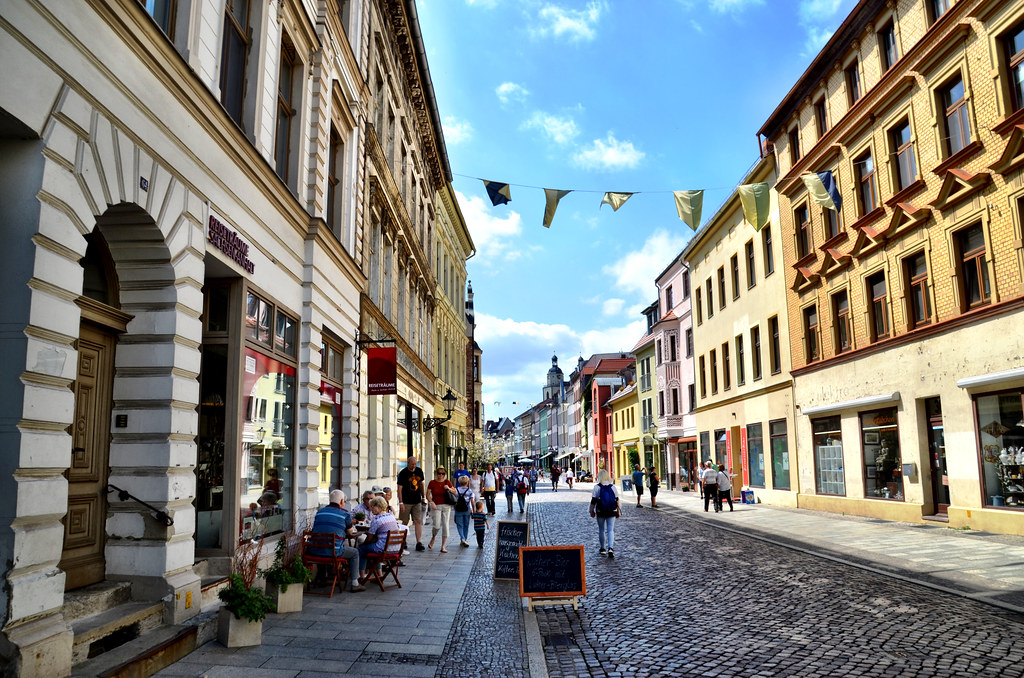 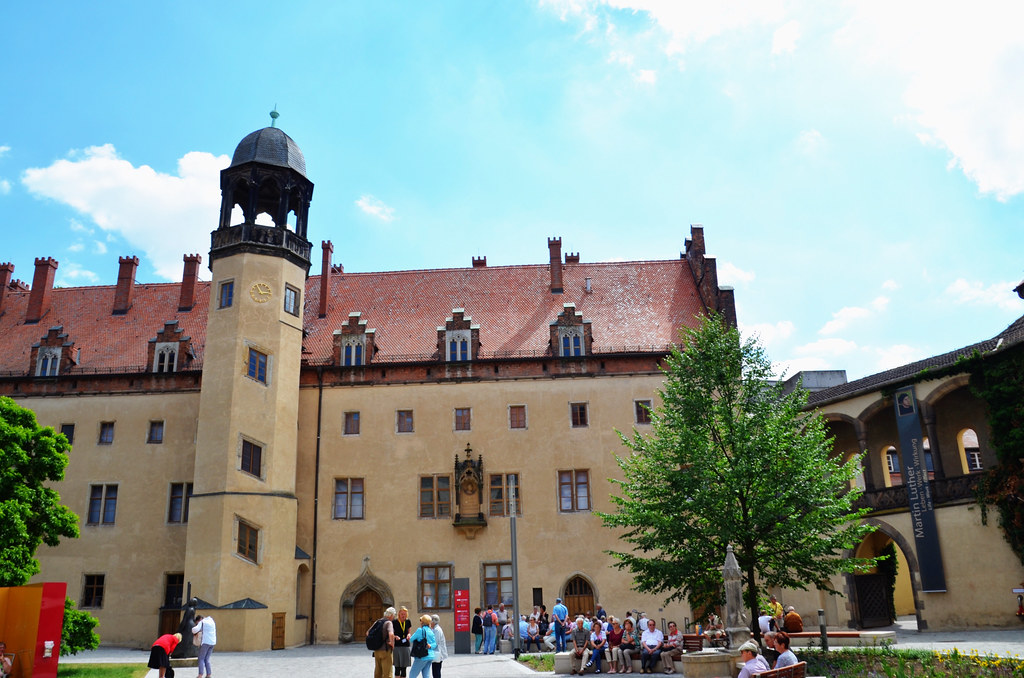 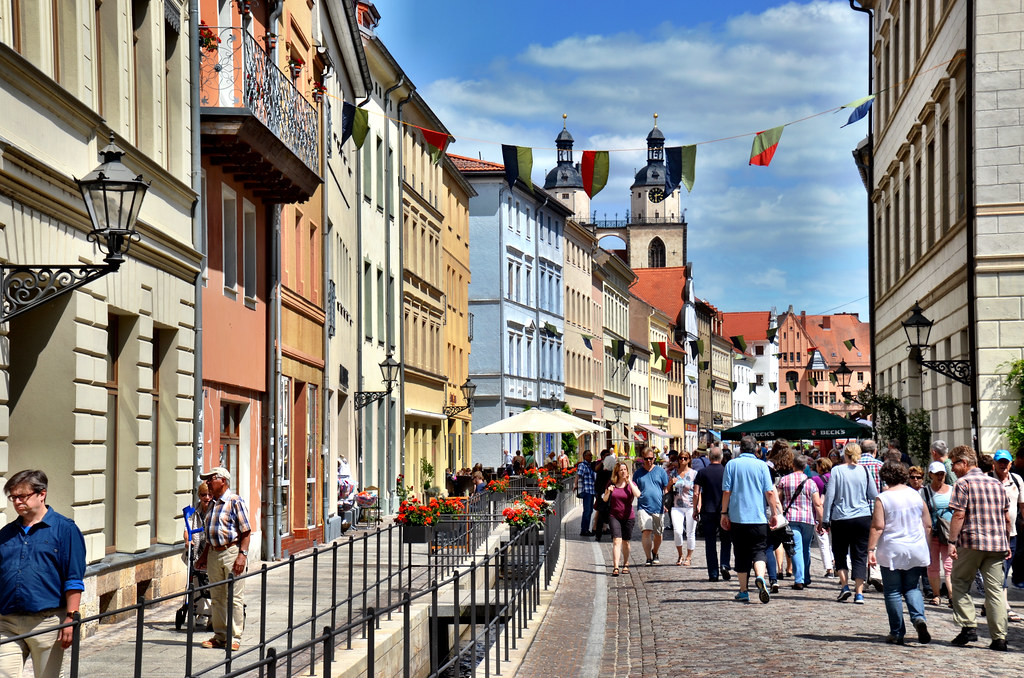 There’s plenty to see and do around Wittenberg for that important crash course into all things Luther. Walking down the main street, I was mesmerized by the bright colors of the buildings, the amazing architecture and just the energy of the town. It was a fun place to be, plain and simple. Starting at the Castle Church, I worked my way back in time through Luther’s history in Wittenberg, from where he nailed those theses, to where he lived and worked and the church where he gave so many sermons. I picked up a handy audio guide at the tourist center and spent the rest of the day learning as much as I could about the man himself. I have to confess something. I love history, I was brought up Lutheran and yet I knew almost nothing about Martin Luther and how the Reformation actually started. I knew the basic principles, but none of the particulars and spending the day absorbing the information at the actual places where they happened was nothing short of amazing. I also have to give the city a lot of credit as well. Wittenberg has made it easy for visitors from around the world to visit and learn, creating walking trails and providing information in a variety of languages. Having traveled fairly extensively around Germany, this isn’t always the norm and it was nice to see in Wittenberg. 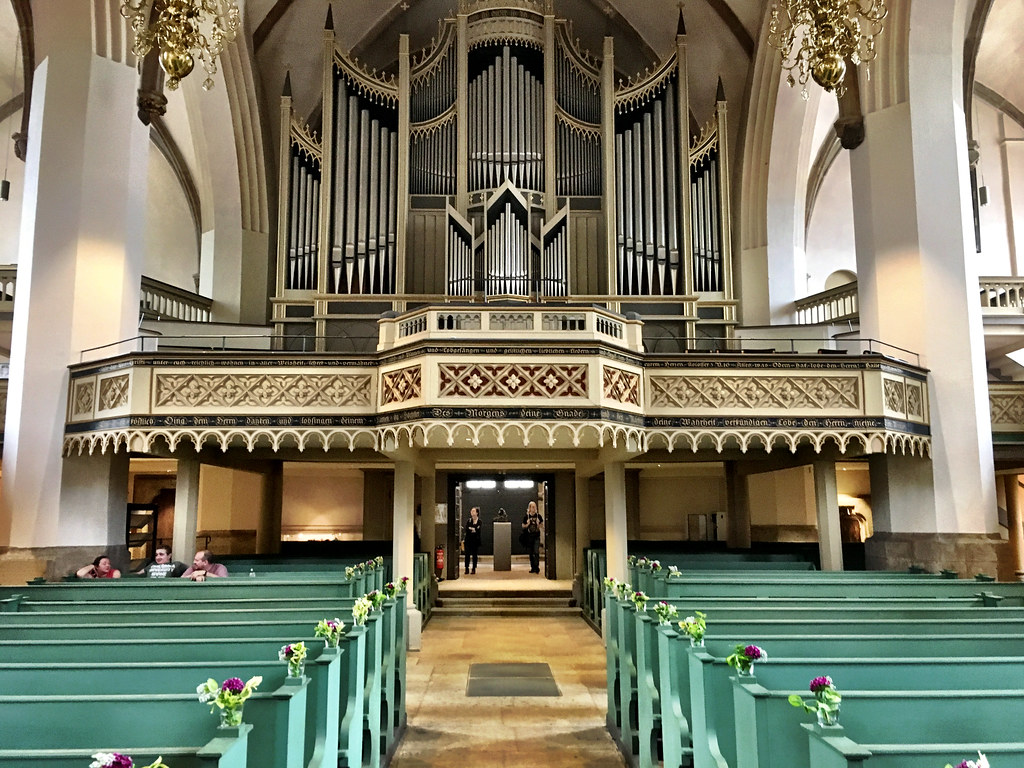 As is usually the case though, my favorite moments in Wittenberg were ones that surprised me. Early in the day, I noticed a small sign that said English language church services were going to be held that evening in the old City Church. The same church, if you’ll recall, where Luther gave his sermons and in which the first Protestant service in the world took place. As a student of history, there’s no way I could pass up this unique opportunity to experience history in such an intimate way, which is how I found myself quietly sitting in one of those old pews that evening. By the time the service began, the church was packed with people, again surprising me. Surrounded by the same walls that have heard thousands of sermons over the centuries and listening to the pastor as he spoke from the same pulpit where Martin Luther once took up the cause of the Reformation gave me goose bumps. While not religious, that doesn’t mean I didn’t appreciate the history of the setting and the experience provided me with a deeper level of understanding that books or guides just can’t duplicate. 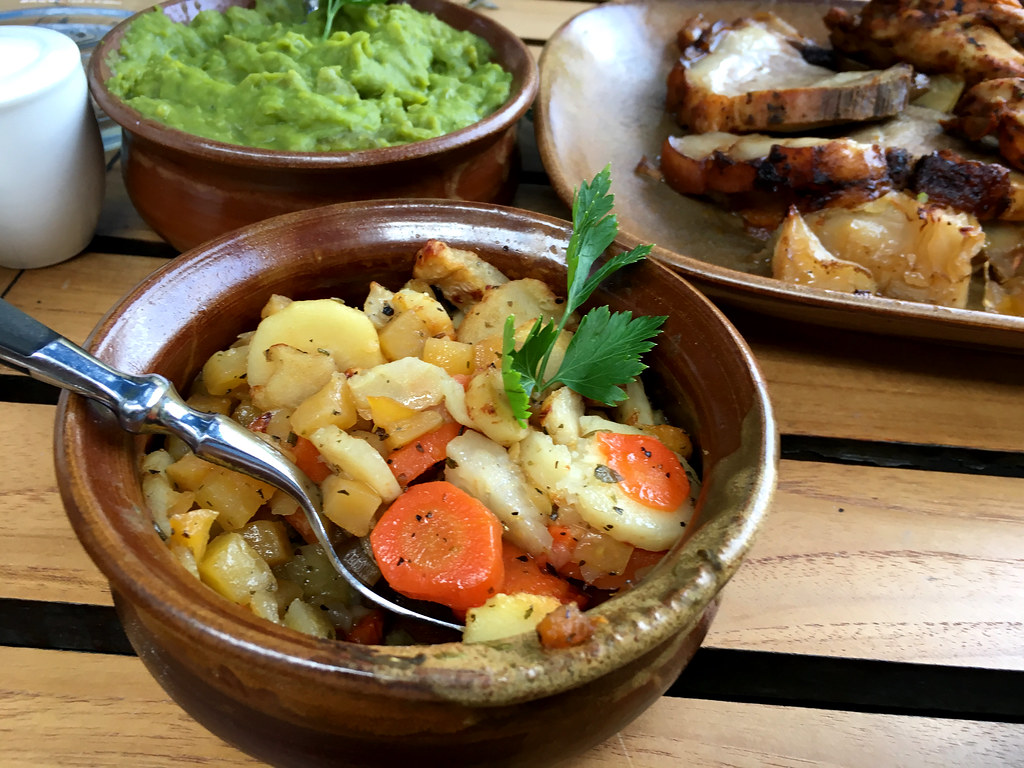 But I was also smitten by the city in general. I never knew that it was so beautiful in its own right, Luther or not. Walking around town for the better part of the day, that simple act of just getting to know it personally was a simple joy but one I know I’ll never forget. Just as I know I’ll never forget my first Luther Dinner. I’m not sure if it’s being done only for the anniversary year or if it’s a permanent fixture, but several towns and cities along the Luther Trail in Germany have restaurants featuring special Luther Dinners. While the particulars vary from spot to spot, the overarching theme is a meal taken from 16th century recipes and menus. It’s meant to help folks go back in time by enjoying the same sort of food Martin Luther enjoyed. (A little too much perhaps if you look at his portraits.) I enjoyed two such dinners while in Germany, the first in Wittenberg and reflecting back on my trip, I now realize how much I enjoyed them. In Wittenberg the meal was a hearty one with plenty of meats, root vegetables and other 16th century delights. What was most noticeable was what was lacking, potatoes, sugars, many spices and other ingredients we now take for granted. It was a fun and unexpected way to experience life in the 16th century, while also enjoying a great dinner.

Wittenberg is the place to be if you’re curious about the life and times of Martin Luther. But, as I learned, there’s a lot more to the city than just the Reformation and I think makes a great stop for any type of traveler, regardless of your faith or background.