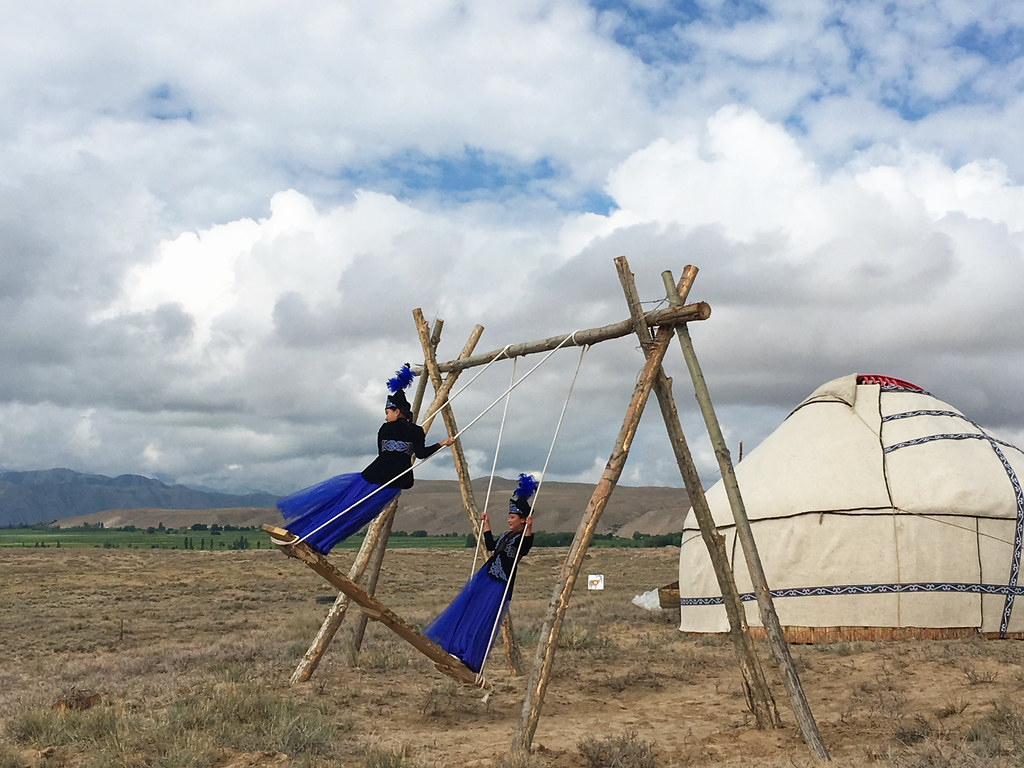 No, Kyrgyzstan isn’t on the travel radar for most people. Heck, most people can’t even place this Central Asian country on a map; I know I couldn’t. But almost immediately after arriving into the country I began to understand why so many people have fallen deeply in love with it. Amazing landscapes, delicious food and some of the kindest people I’ve ever met, these were just a few of the daily hallmarks that characterized my travel experience in Kyrgyzstan. I have so much to say about my journey around the country that I’m not quite sure where to start, so I thought I’d do what I normally do and share those daily highlights that meant the most to me, as initially posted on Instagram. Together as a group I think they accurately share what the real experience of traveling around Kyrgyzstan is like, along with my own personal feelings of awe and wonder as I discovered this remarkable country for the first time.

I’ve wanted to visit Central Asia for a long time and I’m so glad that Kyrgyzstan was my first introduction to one of the most remarkable places on the planet. I’m working on a project sponsored by USAID whose goal is to share the width and breadth of experiences available in the country and there’s no better place to start than Osh. I took this panoramic view of the city from the country’s only UNESCO site, the Sulaiman-Too Sacred Mountain. A beacon for worshippers throughout the ages, its most important role took place during the heyday of the Silk Road when it served as a beacon for travelers. Along with the ancient bazaar that grew up below it, Sulaiman was one of the most important stops on the Road.

The largest and probably oldest outdoor marketplace in Central Asia, the so-called Silk Road Bazaar in Osh isn’t just a place to buy anything, it’s a part of world history. For more than 2,000 years people have been buying and selling anything you can imagine on this same spot, originally an important stop along the famed Silk Road. I can only imagine the history that has passed through these narrow aisles, traders from around the world making the trek from China to the Mediterranean. Entering the bazaar early in the morning, it was still slow by bazaar standards, giving me the perfect opportunity to wander aimlessly. Sure, the goods for sale were interesting, but even better was the people watching. Dressed in traditional Kyrgyz attire, the dresses and hats were gorgeous, adding to the overall visual overload of color and design. Clothes to jewelry to meats and vegetables to modern day electronics, it really is a place to find whatever it is you’re looking for. But for me, it was about meeting Osh and Kyrgyzstan for the first time, getting to know the culture and history of what really is a fascinating country. 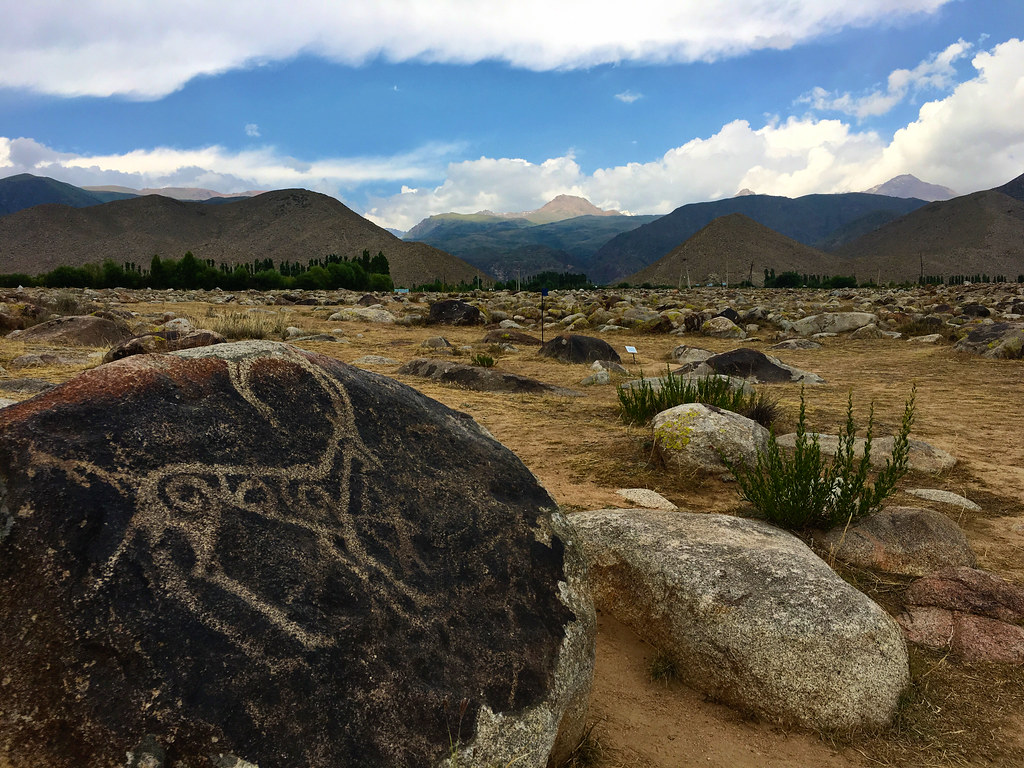 When I was a kid I thought that I’d be an archeologist when I grew up. I probably just watched Indiana Jones too many times, but as soon as I learned that science and math were involved, I decided that archeology was not for me. But that same love of learning about ancient cultures has never left, it’s something I always enjoy and today I came face to face with another one near the shores of Issyk-Kul lake in Kyrgyzstan. Walking onto the boulder strewn field and open air museum at Cholpon-Ata was surreal and was honestly a scene I’d expect to see somewhere like Iceland. Glaciers carved this landscape, leaving the boulders behind and it’s on these massive rocks that ancient peoples left their own marks on the land, but through storytelling. Pictures of hunters and animals adorn the rocks, originally they could have been used for astronomical purposes or just as simple messages. The fact they still stand thousands of years later is of course humbling, but it also adds a different sort of beauty to what is already a remarkably breathtaking landscape.

Spending a morning touring Karakol, one of the day’s highlights was actually about 30 minutes outside of town at the gorgeous Jeti Oguz rock formation. Translated, it means the Seven Bulls and there’s a legend attached to it of course, but for me the experience was amazing in its own right. Standing there, listening to the rushing stream as dozens of horses wandered about freely grazing to their heart’s content, that moment seemed to define Kyrgyzstan for me so far. Known for their horsemanship and love of nature, to join them in this love affair was a special moment. Of course it helped that it was also a nice day, but I soon realized why Jeti Oguz is one of just a handful of places around the country that every Kyrgyz hopes to visit at least once in their lives. 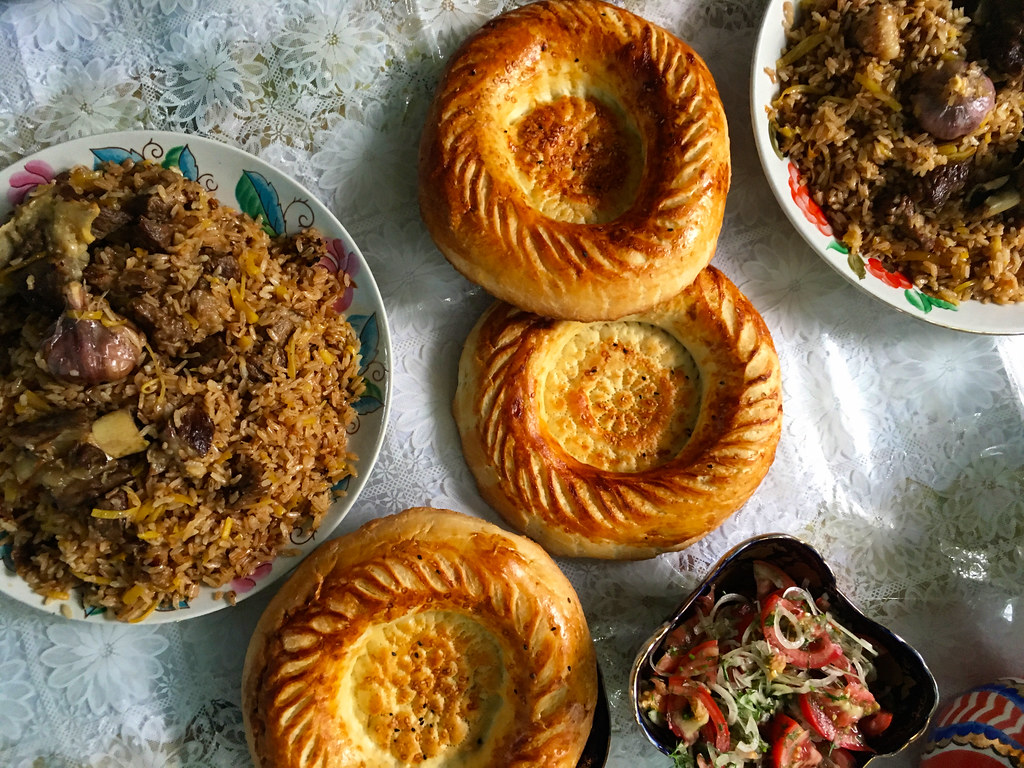 To understand the travel experience in Kyrgyzstan, it’s also important to understand the role that food plays in the local culture. Food is important in Kyrgyzstan, as it is in many countries, but for me the cuisine was honestly one of the highlights of the experience. Like most people, I really didn’t know what to expect but almost immediately I was won over by their delicious traditional dishes. As an affirmed carnivore I fit in well there, but one meal in particular was special, the night I learned how to make plov. My Kyrgyz friends may not like to hear this, but plov is actually an important dish throughout Central Asia, and forms the basis of the diets for millions of people. It’s also a simple but hearty dish made from meat that is fried, boiled and steamed with yellow carrots, spices, garlic and then cooked rice. Served as a concoction, it’s tasty and definitely filling. While in Osh I joined a Plov Dinner Tour where we were invited by our guide into his home to help make a fresh batch. It was fun, educational and definitely delicious and was one of the highlights of my time in Kyrgyzstan. 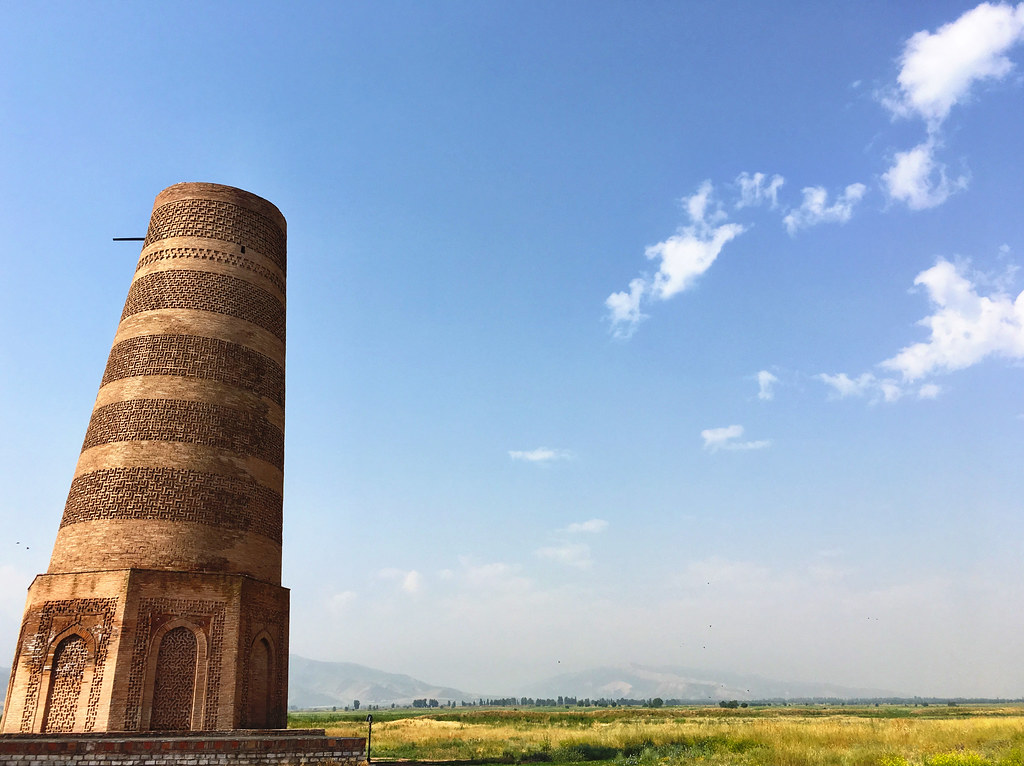 In many Central Asian countries like Kyrgyzstan you’ll find these lonely towers, minarets that are the last remnants of ancient cities. During the 11th and 12th centuries civilizations flourished in Kyrgyzstan and along with their cities they naturally established mosques. The ones left in the country are amongst the oldest minarets in Central Asia and since you can also climb them, they also offer amazing views of the surrounding landscapes. Kyrgyzstan certainly hit all the marks with me in terms of history, culture and natural beauty. 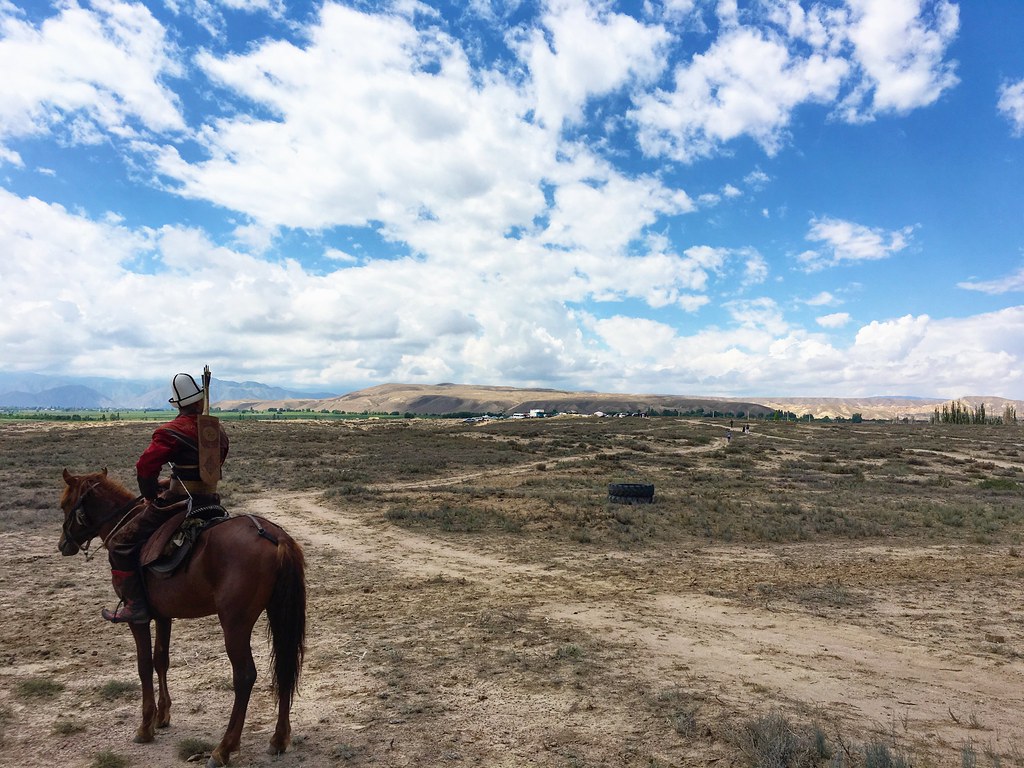 Attending a special ethno-festival on the banks of Lake Issyk-Kul was one of those rare occasions when I had so much to say that I didn’t know where to start. The daylong event shared some of the best aspects of traditional culture in Kyrgyzstan. Dancers, story tellers, athletes and cooks all gathered in a fun and friendly sharing of their heritage. That’s one reason why I chose to share this photo. Nearly all of the traditional sports involved horses in some way or another and this quiet moment looking across the plain was a special one. The event was even more fun than I’d hoped and I have lots more to say about the experience and the people who made it so special.

I’m not a camper by nature and roughing it for me usually entails a hotel without AC, but I think it’s practically criminal for any traveler to visit Kyrgyzstan and NOT spend at least one night in a yurt. The people in this part of the world were nomadic for most of their history and at the center of that existence was their home, the yurt. Even Kyrgyzstan’s flag pays homage to this history with the design at the center of the yurt featured prominently on the national standard. For me though, spending the night along the pristine waters of Lake Issyk-Kul, listening to the waves lap up on shore as I slept in my yurt was just something I needed to do. I’d spent the week prior learning everything I could about this amazing country, but I needed that time getting closer to it in this very unique way so that I could walk away not just knowing, but understanding. 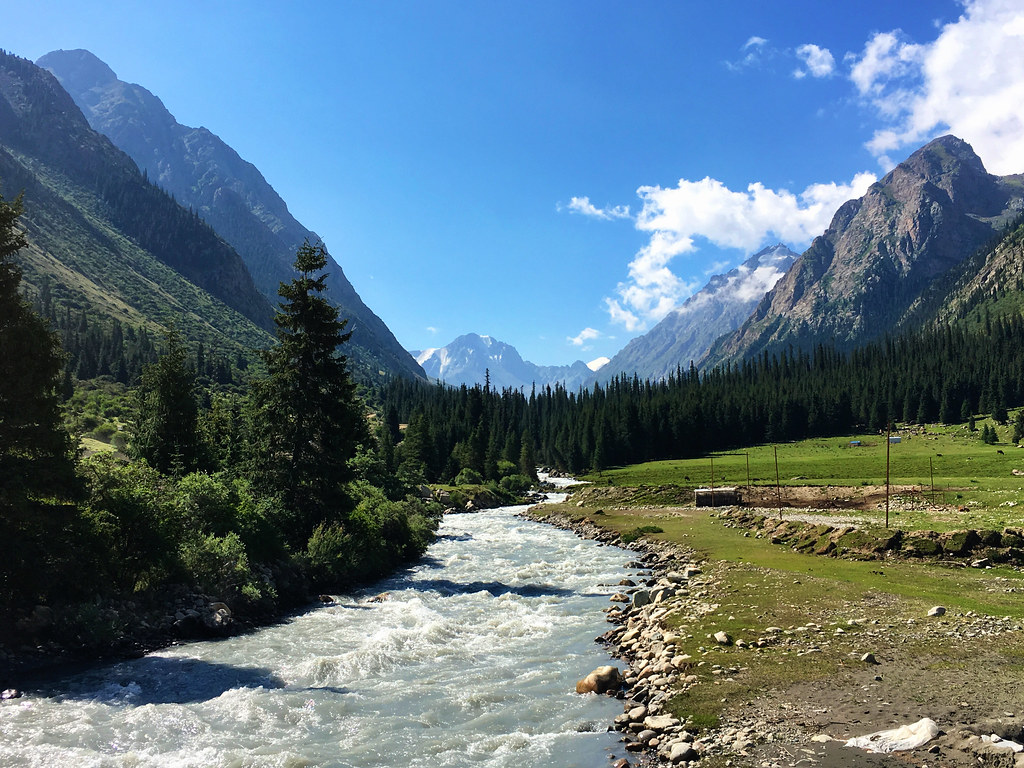 Yes, this is still Kyrgyzstan and yes, the level of natural diversity here is nothing short of amazing. A short drive from my yurt camp along the lake, the Barskoon Valley is as close to natural perfection as you can get. It’s a remarkable little pocket of alpine bliss because less than 30 minutes away is the red cracked clay of a much more arid part of the country. But in Barskoon it’s all about massive snow covered mountains, crystal clear streams and waterfalls that have been attracting curious trekkers for decades. Behind those mountains lies China, which means this very quiet valley once played a pivotal role on the Silk Road welcoming visitors from around the known world. I was only concerned though with exploring as much of it I could, to breathe in that crisp mountain air and to enjoy the moment for what it was, travel perfection.

I honestly didn’t know what to expect from the trip. I’d long wanted to visit Central Asia and so when the opportunity to work with USAID to help promote tourism to the country came up, I jumped at it. Whatever I expected though, those expectations were very quickly surpassed and this trip is easily one of my favorites. Whether it was eating delicious food or experiencing the many natural treasures around the country, every day was a new adventure and for me it was necessary. I needed to get back to my traveling roots, to feel the sensation of true exploration again and Kyrgyzstan provided all of that and more. This shot was taken on the shores of Lake Issyk-Kul, near the yurt camp where I spent the weekend. I woke up early to watch the sun rise and was richly rewarded for the effort. Everyone else at camp was asleep and I was alone with my thoughts as I watched the world light up in glorious hues of red and orange. It was a peaceful and introspective moment, the kind I love when I travel because it’s during those times that I truly appreciate the experience, when I appreciate the act of travel for what it is – the chance to learn and grow as a person. So thank you Kyrgyzstan for your incredibly kind hospitality and you better believe it won’t be my last visit!

This trip was made possible by the support of the American people through the United States Agency for International Development (USAID). The contents are the sole responsibility of the author and do not necessarily reflect the views of USAID or the United States Government.