I’m not entirely sure that I like Las Vegas. I know, I know, I’m a terrible person but if forced to pick a favorite travel destination, it wouldn’t rank highly. That being said, I have loved my experiences exploring Nevada outside of Sin City and I really do think that as a destination it’s highly underrated. So today I thought I’d share a few of my favorite travel experiences around the state, places and sights that have absolutely nothing to do with slot machines or Cirque du Soleil.

Otherwise known as Nevada State Route 375, this is a 98-mile stretch of road that starts at the intersection of U.S. 93 and the Extraterrestrial Highway and continues west to the intersection of the Highway and U.S. 6. Thanks to the fact that Area 51 rests along the highway, this area has long been known for alien sightings and a fierce belief in life from other worlds visiting the remote Nevada desert. Over the years the road has developed into what it is today, one of the quirkiest but also one of the loneliest stretches of road in the country. Some of my favorite moments were admiring the desert landscapes, enjoying fantastic blueberry pie at the Little A’Le’Inn, visiting (sort of) Area 51, and spending the night at a haunted hotel in Tonopah, Nevada. 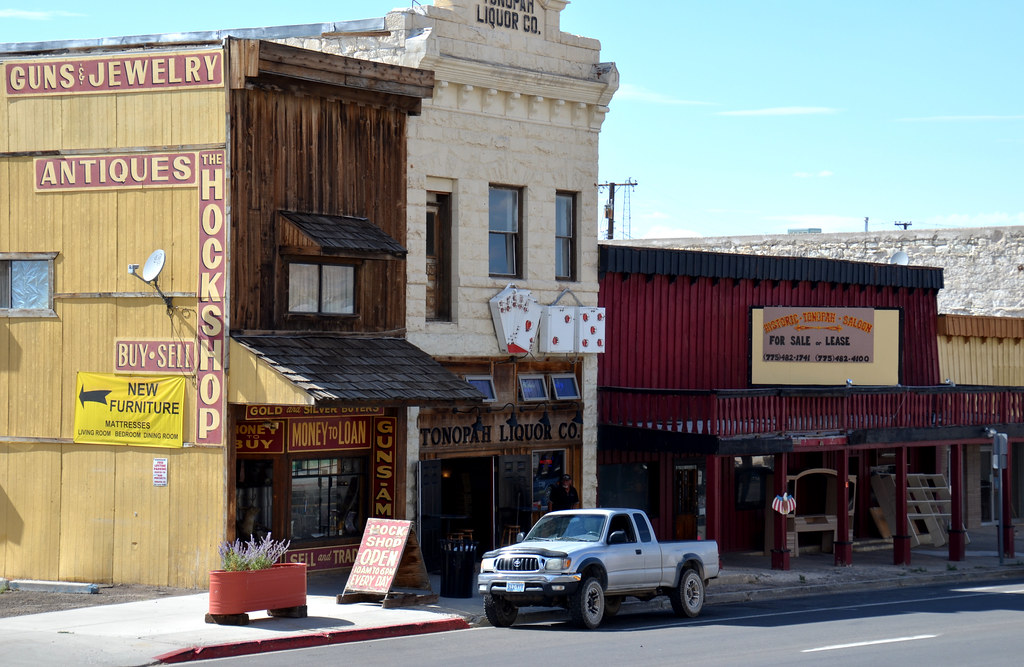 Speaking of Tonopah, when you do find yourself in town be sure to spend some time exploring it. Once a major mining town, while the remnants of that once-prosperous past can be found everywhere, it’s clear its best days are long gone. At the heart of the experience in town though is a stay in the historical, and haunted, property, the Mizpah Hotel. Built in 1907, the hotel is certainly a throwback to another era with its Victorian lobby and finishings that look as if they were stolen from Downton Abbey. The opulence and luxury at the hotel seems completely out of step with the town surrounding it today, but I’m thankful it does still exist, otherwise I would’ve missed my chance to sleep in one of the most haunted hotels in the country. The most notable ghost is the so-called Lady in Red who many believe is the ghost of a prostitute who was beaten and murdered on the 5th floor of the hotel by a jealous boyfriend. No one knows for sure who she is, but given how widespread the accounts are of her presence, there’s no doubt that something otherworldly calls the hotel home.

A very easy drive from Vegas, this is a great way to spend half a day or even the entire day if you’re into hiking and nature walks. The Red Rock Canyon National Conservation Area is just 20-minutes from Vegas and can even be seen from The Strip, which is probably why more than 2 million people visit every year. Another reason for the incredible number of visitors is thanks to the stunning scenery and how easy the site is to explore, making it an ideal daytrip. Driving up to the refuge, I kept wondering if I was in the right spot, but then I saw the massive red peaks and knew that I had arrived. Paying a nominal fee to enter the site and the driving loop, I was excited to see one of the country’s most iconic landscapes for myself. The site includes a 13-mile, one-way driving loop providing access to the key features of the area. With plenty of parking and scenic overlooks along the way, the road has been perfectly designed for anyone who wants to experience Nevada’s stunning natural treasures. There are also a number of hiking paths through the area, also easily accessed from the main road and while I didn’t avail myself of those options, this is a dream getaway for anyone who likes to hit the trails for a few hours. I was surprised in every way by Red Rock and can’t recommend it highly enough.

I love public art installations and when I learned that a new one was located just outside the Vegas city limits, I couldn’t wait to visit. The “Seven Magic Mountains” art installation is a two-year exhibition located in the desert right outside of the city. Created by artist Uno Rondinone, the site features seven 30-foot tall day glow totems made up of colorfully painted, locally sourced boulders. This installation, on view through May 2018, is meant to mimic hoodoos and other natural rock formations evoking the art of meditative rock balancing but also to offer juxtaposition between the natural and the fabricated. In a desert location with Vegas in site, it’s a perfect representation of that dichotomy. It’s also just a really cool piece of artwork to visit in person and located out in the middle of the Nevada desert, it felt as if I was a million miles away from everything else.

I’ve wanted to visit this engineering marvel since I was a kid and was thrilled to actually make that a reality on my most recent trip. Located on the border of Nevada and Arizona, Hoover Dam was built in the 1930s during the Great Depression and was an incredible effort involving thousands of workers over 5-years. It was, and is, also an amazing feat of engineering and man’s ability to work with the land to provide life where none existed before. Today the dam still provides incredible amounts of power to nearby states, most notably southern California that depends on the dam for much of its power. But it’s also a visually beautiful site, the massive dam itself has a sort of architectural allure that’s hard to ignore. Touring the power plant as well as walking the wall of the dam itself, it was hard not to be impressed by the power of this site. Just opposite the dam is another architectural marvel, the Mike O’Callaghan–Pat Tillman Bridge. Completed in 2010, the goal of the bridge was utilitarian, a bypass to draw highway traffic away from the top of the dam. In the process of solving this transportation problem, designers created what I think is one of the most beautiful bridges in the country. Soaring 900 feet above the river below, the bridge incorporates the widest concrete arch in the Western Hemisphere and is the world’s highest concrete arch bridge. But after spending the afternoon here, that incredible scale is just par for the course. Everything here, the dam, the power plant and now the bridge all seem impossibly large. Oversized structures in an oversized landscape. It’s an industrial type of beauty for sure, but one that incorporates natural elements in a perfect fusion of man made wonders and those given to us by Mother Nature. 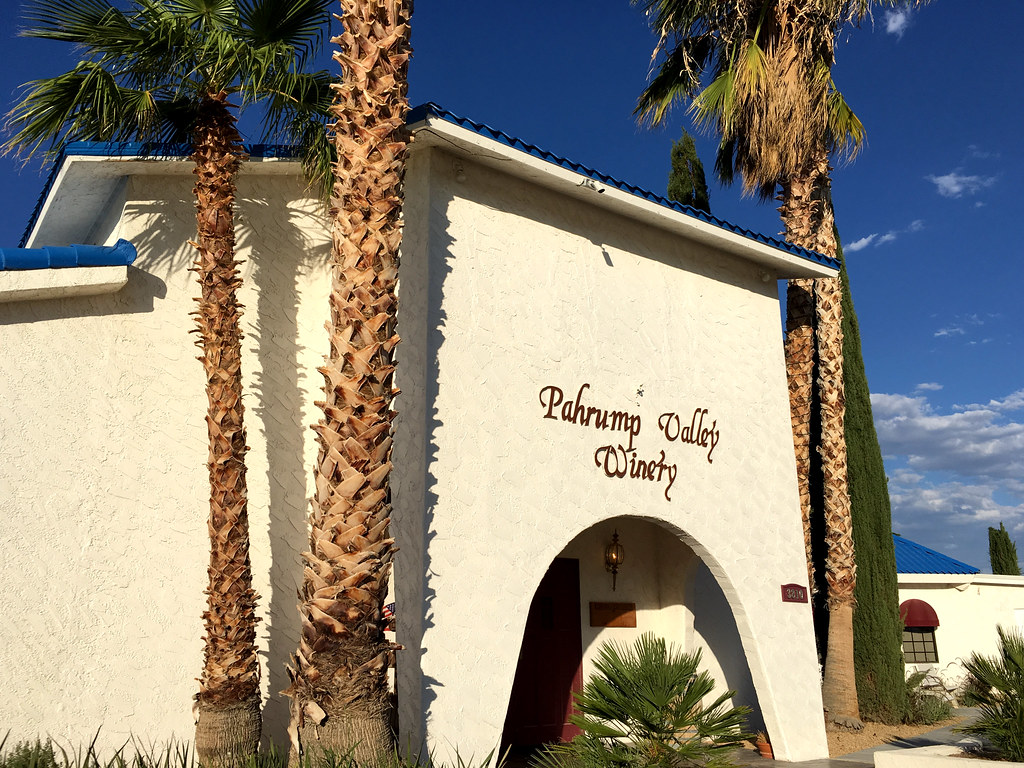 This may not appear on many Nevada top ten lists, but I had a wonderful afternoon and evening relaxing in this desert community. Unfortunately I didn’t have a lot of time in town, otherwise I would have certainly availed myself of one of the many outdoor activities offered. Known as Nevada’s adventure travel base camp, there are tons of things to do if you like a little adrenaline pumping fun. Desert off-road adventures, jet packing (seriously), mountain biking, hiking and more are all reasons why this small town ranks highly on adventure traveler’s bucket lists. There’s also a more genteel side to Pahrump though as I discovered at the Pahrump Valley Winery. I certainly never expected to find a winery in the desert, but after a brief tasting I learned that they are indeed producing some amazing vintages. More than that though is the on-site restaurant, Symphony’s that serves up well-executed and delicious meals. My time in Pahrump may have been brief, but it was one of the highlights of my time in Nevada.

Goldfield, Nevada was a blip on the road as I made my way from Tonopah along part of what used to be a popular Western driving route. This mining boomtown was at one time one of the wealthiest cities in the state, although those days have long since passed. On the outskirts of Goldfield though is another type of treasure, one of the most unusual art installations in the world. The International Car Forest of the Last Church was originally created as an open space where artists could visit and let their creative minds run wild not on blank canvases, but on cars. I drove down the dirt road from US 95 leading to the site, unsure of what I would find. It’s one thing to see images in a book, but it’s quite another to be in the middle of something like the Car Forest. There, strewn around the site, are more than 40 cars, trucks and even buses, all in various states of entombment and decay but all also extravagantly decorated. True to the original goal of the Forest, artists from around the world have indeed come to create their small works of art, the vehicles are the blank canvas and their wildly creative minds on full display.

I didn’t expect a lot from the Goldwell Open Air Museum. That’s probably because I hadn’t properly researched it beforehand; instead I visited because it was on my to-do list. Thank goodness I made the short detour to visit this amazing site near the old ghost town of Rhyolite, because it quickly became a personal favorite museum. The concept started back in 1984, when Belgian artist Albert Szukalski installed his eerie sculpture “The Last Supper” against the backdrop of the Amargosa Valley. In subsequent years, additional pieces were added by three other Belgian artists who chose to create their works in relative obscurity in the Nevada desert near Death Valley, even though they were accomplished and well-known throughout the European art scene. Now a non-profit organization, the museum has expanded over the years to add to the creative spirit of the site. One of my favorite sculptures at the museum – “Lady Desert: The Venus of Nevada” (1992) – was originally inspired by the classical Greek masterpiece “Venus de Milo,” but reinterpreted for the modern era. Taking on a pixilated presence, it’s meant to echo the high tech world we live in. I loved this piece not just for the work itself, but its juxtaposition against the raw beauty of the desert. You really have to tour the museum to fully fall in love with it, and this is definitely one place I recommend everyone visit.