On every trip I take there are dozens of activities and experiences that I typically enjoy and over the months that follow each trip, I diligently try to share all of them here on the blog. Sometimes though things either get lost in the shuffle or they’re experiences that really don’t translate into an entire article. So today I thought I’d share some of those experiences from the last several years, activities I either haven’t written about yet or haven’t addressed in great detail. It doesn’t mean I didn’t enjoy them, I just failed to give them the exposure they deserve. Plus I’m getting older and forget things, so there’s that too.

There are certain parts of the world where hospitality and service take on entirely new meanings. These regions understand the importance of taking care of luxury travelers and the Middle East is certainly one of those regions. I’ve been to the Dead Sea resorts on the Jordanian side of the saline waterway a couple of times, and on each trip I’ve been amazed by the level of care exercised at the 5-star hotels and resorts along its banks. One of my favorites though is the Kempinski Ishtar Dead Sea Hotel. Although it’s a massive resort, the hotel still manages to maintain extremely high levels of service at every turn. It’s also just a visually stunning resort and a place I could easily spend a few days. Another personal favorite luxury escape in Jordan is the Evason Six Senses Spa and Hotel at Ma’In near the Dead Sea. This small, quiet luxury hotel is built high in the hills next to naturally occurring hot spring waterfalls. Stays there are meant to be calm, holistic experiences combining spa treatments with long soaks in the thermal baths. The property is an amazing place to go and just do nothing except relax and decompress.

The financial crisis of 2008 hit Iceland unlike any other country in the world. Due to incredibly overleveraged banks, the country had no other choice but to declare bankruptcy, a rarity amongst nations. The Walk the Crash tour explores what led to the Icelandic financial miracle of the early 2000s, the subsequent crash and then the rebuilding into a stable economy in what is ultimately a very short period of time. It was a fascinating look not only at the history of the country, but also the people and culture. I learned more about Icelanders that morning than I had on any previous trip, while exploring areas of the city completely new to me. It was fun, it was informative and it was engaging – just what any great walking tour should be.

Driving the Extraterrestrial Highway in Nevada last year was one of the best drives I‘ve ever tackled. It was strange, it was quirky and the landscapes were undeniably beautiful. At the end of the day of driving though I found myself in another strange and quirky place, the small town of Tonopah, Nevada. Once a major mining town, while the remnants of that once-prosperous past can be found everywhere, it’s clear its best days are long gone. At the heart of the experience in town though is a stay in the historical, and haunted, property, the Mizpah Hotel. Built in 1907, the hotel is certainly a throwback to another era with its Victorian lobby and finishings that look as if they were stolen from Downton Abbey. The opulence and luxury at the hotel seems completely out of step with the town surrounding it today, but I’m thankful it does still exist, otherwise I would’ve missed my chance to sleep in one of the most haunted hotels in the country. The most notable ghost is the so-called Lady in Red who many believe is the ghost of a prostitute who was beaten and murdered on the 5th floor of the hotel by a jealous boyfriend. No one knows for sure who she is, but given how widespread the accounts are of her presence, there’s no doubt that something otherworldly calls the hotel home.

A couple of years ago I put together a list of 40 things I wanted to accomplish before I turned 40. The experiment led to a fun year of challenges and slowly ticking off many of those items. On there was a simple exercise, something I had long wanted to try – yoga. While staying on the Gold Coast in Queensland, I figured that the time had finally come, which is how I found myself on the beach near my hotel with a private instructor, there to teach me the ins and outs of yoga. After an hour of bending and twisting myself in ways I didn’t know possible, I left the experience exhilarated. It was fun and a great workout, and while I haven’t kept it up at home it’s an activity I’d love to do more of. The best part though was the scenery. The Gold Coast of Queensland is a gorgeous coastal community where there are no bad days, only surf and sand. It was a beautiful morning watching the world meander by as I listened to the sounds of waves crashing nearby.

Last year I found myself with some free time in Vienna, so I decided to visit one of the world’s most famous museum complexes, the Belvedere Palace. This massive property is actually made up of several buildings and expansive gardens, but for me the highlight was the Upper Belvedere. From there I was able to survey the grounds of the palace and the city of Vienna itself, made all the better by the incredible early summer weather. The museums are also home to a large art collection, including the world’s largest collection of paintings by Gustav Klimt. The golden painting “The Kiss” may be the highlight for many visitors, but spending some time wandering around the many exhibits, I was impressed by nearly everything I saw.

While on a river cruise in Burgundy, France, I had the great opportunity to visit many French towns and cities completely new to me. I visited so many though that they began to blur into one another and a few I have sadly neglected to cover on the site. One of those beautiful towns was Beaune, in the heart of Burgundy’s winemaking region. As soon as I arrived into town on a sunny Saturday morning I could tell that life centered around wine, from the many vineyards surrounding it to the shops and producers in Beaune itself. A mandatory stop for anyone doing a wine tour of the region, Beaune actually has more to offer than just wine and at the heart of that experience is its famous Hôtel-Dieu. Founded in the 15th century, this massive building served as a hospital for the poor for centuries. Today though it’s best known for its architecture, the beautifully colored roof tiles recognizable instantly. Touring the site is fun and offers the perfect introduction to the history of the city and why it’s been so very important for so very long.

A couple of years ago my partner and I decided to try something a little different while in Iceland, snowmobiling. Normally when we visit the country, we drive around different regions, stopping periodically to explore and sightsee. Wanting to be a little more active than normal though, we booked an afternoon snowmobile tour on one of the country’s glaciers and the experience is certainly something I’ll never forget. Bundling up in more layers than I thought possible, the tundra buggy took us up to the hard to reach glacier and the freezing ice sheets of Iceland. Glaciers are strange things, always cold and always inhospitable, but possessing a type of beauty that is unrivaled in nature. That was our snowmobile course for the afternoon and while I’m not really a fan of the machines themselves, I can’t deny that the experience was exciting and fun. Would I do it again? Probably not, but it was a great way to experience a different side to a country I have come to love over the years. 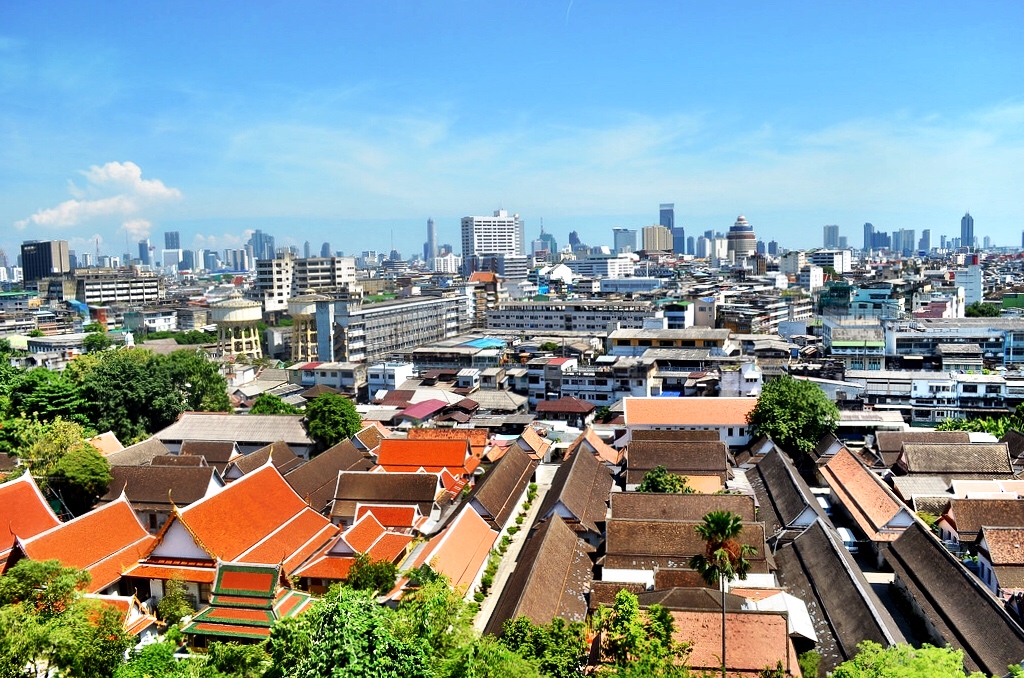 Bangkok is one of my favorite cities and that’s in spite of the fact that it’s almost always hotter than the surface of the sun. Actually, it’s not the base temperature that’s the problem, it’s the incredible humidity but, over the years, I’ve come to accept it for what it is. However, at some points of the year those temperatures and humidity levels soar creating a soupy atmosphere when it’s hard to be outside for very long. That was the meteorological phenomenon I found myself in one afternoon on a trek to find the Golden Mount in Bangkok. I was working on a freelance assignment and had to write about this dubiously famous site, otherwise I would’ve given up after hour one of trying to find it. I did, finally, locate it though, drenched in sweat and still not sure why it “had” to be included in my write-up. Climbing the 300 steps to the top, I was met with views of the city and Buddhist shrines inside. I’m not sure it was worth the effort, but I’m always happy to explore areas of the city that are new to me.

I love Germany and usually find myself traveling in this massive country at least a couple of times a year. I always write about my experiences though, which is why I find it a little odd that I’ve mostly forgotten to cover the city of Leipzig here on the site. The reason is because I was in Leipzig not to sightsee, but to attend a travel conference. I arrived just in time for the conference and left immediately after, although a short sightseeing tour was included in the programming. The result is that although I spent a couple of days in the city and I really enjoyed my time there, I frankly don’t have a lot to say about it. Because of this, more than anything else, I would love to return and get to know the city a little bit better.

England was the first place I visited as a young solo traveler and since then have been fortunate enough to return many times. While I’ve spent a lot of time in London though, it took me many years to appreciate and enjoy spending time in the capital. While it’s not one of my favorite cities, today I’m happy to say that I always enjoy my time there and it’s in large part due to the touristy experiences in town. It wasn’t until I spent time in Westminster, the Tower of London, the Inns of Court and even the London Eye that I started having a good time. I stopped trying to get off of the tourist trail and started embracing it, learning why millions around the world love the city as much as they do. I’ve written about a couple of these experiences, but it’s their totality that I think makes London a fun city to visit.