All I had to go on before my first visit to Bogota was what I’d heard about the city over the years and, to be honest, a lot of that wasn’t positive. A violence plagued nation for decades, it’s only been in recent years that the tensions have all but evaporated and in its place a vibrant tourism sector has taken root. Colombia today is one of the hottest travel destinations in South America and I was excited to experience the culture and learn about the history of this at times enigmatic nation, all with the help of Monograms travel. They helped me not only experience the classic sights in Bogota, but along with my Local Host I discovered some out of the way spots and traditions that transformed my trip into an extraordinary journey.

One of my favorite things to do in any new city I visit is to try to get a better idea of its geography, which usually means heading to the highest point in town. In Bogota, that means a visit to the mountain of Monserrate; but even that view doesn’t do justice to this massive city of more than 8 million people. More than just a nice place to get a photo, this mountain and the church that calls it home have long been an important site for pilgrims from around the world. In the 17th century a statue for the church was commissioned, that of the Fallen Christ. Over the ensuing centuries, pilgrims far and wide have visited to worship at the site, believing that miracles will be granted to the penitent. Regardless of your beliefs, it’s hard not to be overwhelmed by the spirituality of the church as well as the beautiful views found on top of the mountain. A climbing trail has recently reopened, but the far more popular option is the quick and easy funicular.

In researching what to do in Bogota, one thing immediately rose to the top – a free walking tour all about Bogota’s famous graffiti and street art. Joining the tour was a fantastic decision not just for the artwork highlighted, but because I learned so much about Bogota in the process. Led by a local expert, the 2 1/2 hour tour took us through several neighborhoods where some of the city’s best street art can be found. Anywhere in the world, great street art is rooted in cultural and political messages, and that’s certainly the case in Colombia. The country’s complicated past and present are well represented, but in as beautiful a way as you can imagine. It’s also everywhere, tucked away in even the most unlikely of spots. I took hundreds of photos, but this piece was one of my favorites. Created by the famous street artist Rodez in collaboration with another artist, the artwork features the surreal creations with multiple eyes for which he is so well known, his animales fantasticos. This is a great example of a local business encouraging the artwork – it’s a lot better than a boring blank wall. In this case the business is a hair salon that, oddly enough, offers free haircuts every Wednesday morning. The catch? You have no say in the hairstyle, it’s their chance to experiment with new ideas and methods. So if you’re daring, be sure to stop by for a salon experience you’ll never forget.

In researching the company before my trip I noticed just how often they talk about the role of the Local Hosts, so I knew these were important people. I also didn’t quite know what to expect. Were they tour guides? Were they local people there to help me out? As it turns out, it’s a curious mix of both. The best case study from my trip is Bogota, where the amazing Andres was my Local Host for the duration of my time in the city. Meeting me at the airport, we were in a van heading for the hotel before I realized it. Along the way we chatted about the touristy things to experience in Bogota, but I also asked him about him and his life. We quickly morphed from a tour guide/traveler relationship to a much more casual and friendly one – this only further developed during the three days I was in Bogota. He spent time leading me around town, showing me not only the traditional highlights of the city, but some of his favorite places as well. Even more valuable was the advice he gave me from walking tours to restaurants and more. He validated things I had guessed at and introduced me to experiences I never would have known about on my own. Every travel writer in the world has written about the importance of getting to know locals so that they can show off the “real” version their city. Well, Monograms has accomplished that in a way unlike anything else I’ve seen before.

What I enjoyed most on my trip wasn’t a famous attraction, it was the food. I knew before even leaving home that the culinary side of the trip would be amazing, but even that is a gross understatement. Taking a Bogota food tour, I learned a lot about the culinary traditions of the city and country in general, from its many corn-based meals and snacks to desserts that may seem a little off, but which are all delicious. But it goes well beyond that into fresh and local eating, visiting the neighborhood or citywide markets and buying some of the freshest fruits and vegetables you’ll ever see. Due to the country’s unique sets of climates, they produce fruits so exotic you’d think you were in the middle of Thailand. I couldn’t even name half the fruits I tasted, but they were all delicious. Add in the medium-roasted and full-bodied coffee for which Colombia is so very famous, and the food scene in the country is worth a visit in its own right.

I’m not normally an art museum kind of guy. History, culture – yes, definitely, but my patience for art is somewhat limited. Maybe that’s one reason why I was so excited when I VERY quickly fell head over heels in love with the amazing Botero Museum in Bogota. Even if you’re not familiar with the name, I guarantee you’ve seen some of the many famous works created by Colombian artist Fernando Botero. You know the ones, the plump, oversized people and animals that look like they’ve been inflated? Well, the Botero Museum is the beautiful home to many of his paintings and sculptures. In 2000, Botero donated the works, along with his own private art collection, creating the museum in the La Candelaria neighborhood in the process. Open to the public free of charge, Botero wanted to share his works in a way of his choosing. He still decides on the layout and even the wall colors in the museum, but as I quickly learned the building itself is just as amazing as the works of art it houses. Built in the 1720s, this was the colonial mansion of the Archbishop of Bogota, one of the most powerful men in the city. Beautifully restored, you can easily imagine the lavish lifestyle enjoyed here and for as much as I enjoyed the artwork, it was the building itself that truly won my heart. Bogota is a city of intensely creative people seen through the literature, art but even in graffiti and street buskers. It’s exciting and this is surely one of those “must-see” places in this enormous city. 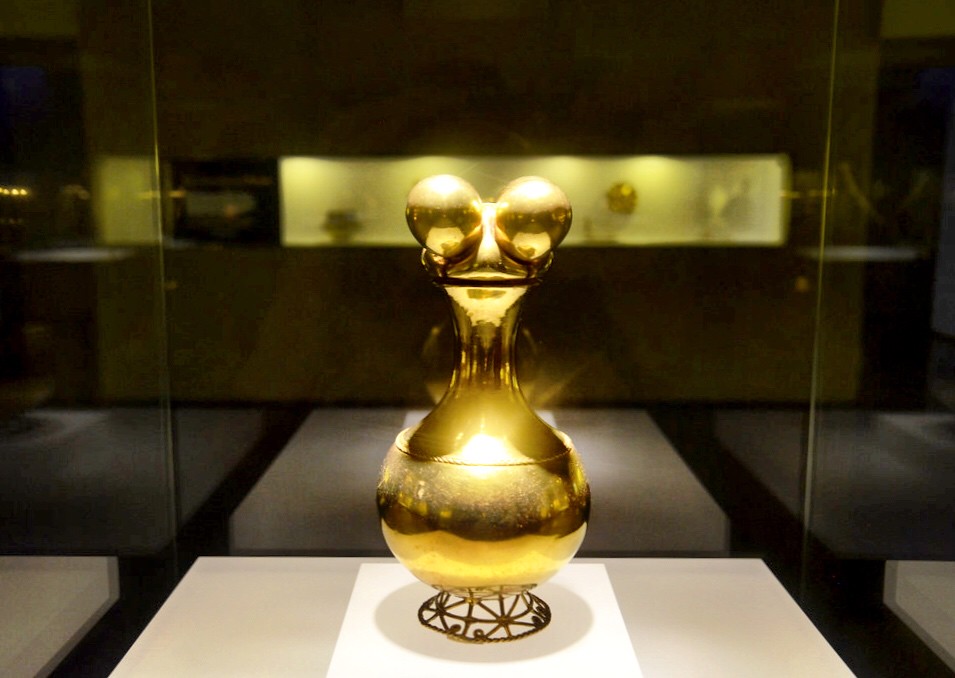 I have to be honest, when my Monograms Local Host said he wanted to take me to see a gold museum, I was less than enthused. I imagined a poorly run museum with random bits of stuff lying around. I shouldn’t have been so cynical though because what I experienced instead was one of the most interesting museums I’ve ever visited. This somewhat-recently renovated museum has been around since the 1930s when some of Colombia’s most important archaeological treasures were deemed vital enough to the country’s heritage to start protecting. Since then, the museum has acquired more than 55,000 pieces detailing not only the many golden treasures, but Colombia’s pre-European history and cultures. It’s a fascinating place to visit and hours could be spent marveling at the treasures and learning a lot about indigenous societies. Oddly enough, the museum is also home to one of the best coffee shops in the city, so be sure to pull up a chair and enjoy some expertly crafted coffee after your visit.

What I loved perhaps more than any other aspect of my trip with Monograms was that most of the travel experience was up to me to craft. They provided me with all the tools I needed, but ultimately it was up to me to experience the country in whatever way interested me the most. In Bogota, that meant a lot of aimless wandering and that, more than a museum or bite to eat, was truly the best experience I enjoyed in Bogota. To be honest though, learning about a new place through some slightly managed wandering is the best way to learn more about it. Getting a little lost, meandering down side streets and following your own natural curiosity is fun anywhere, but it’s especially well rewarded in Bogota. Whether it was marveling at the city’s colonial past, trying a little too much street food or just walking through neighborhood markets, I learned more from the hours spent wandering than on any tour I took.