Although I had passed through Calgary, Alberta a couple of times – and even spent the night there – I was guilty of never spending time getting to know the city itself. It was an oversight I was eager to correct, which is why on my most recent trip up north I spent a couple of days getting to know Calgary a little better. What I discovered was a compact downtown with plenty to offer, especially if you’re a foodie. Here are a few ways I got to know the city a little better, a crash course into all things Calgarian that I think are perfect for just about any visitor to the city. 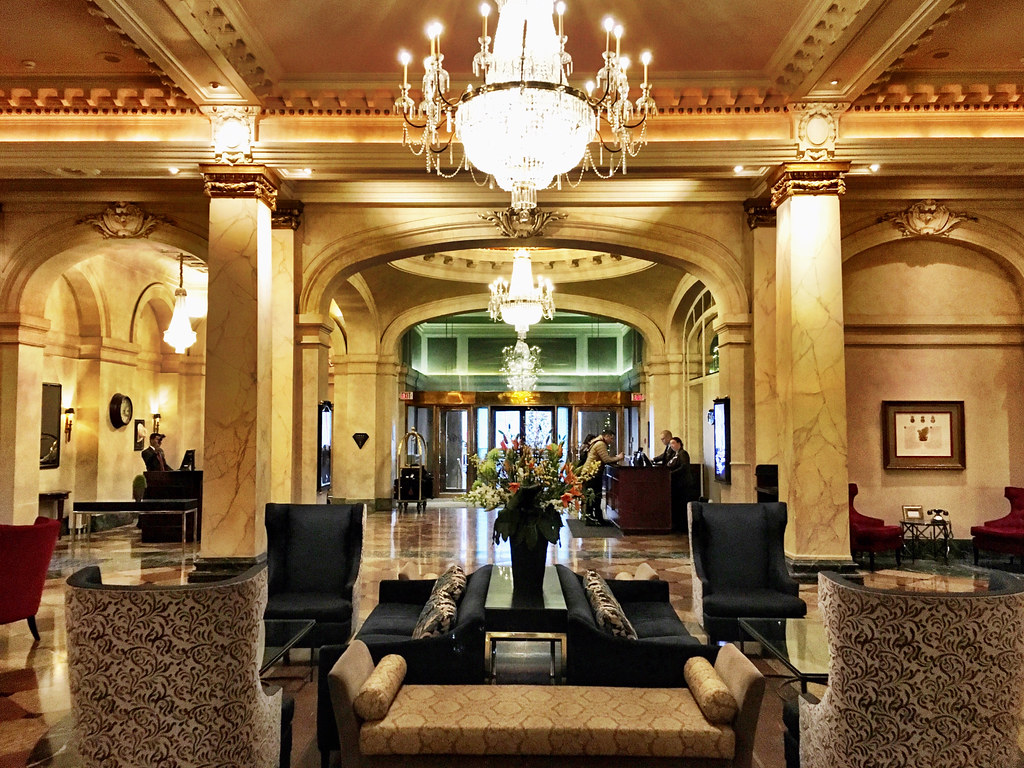 I love a hotel with a great story and when visiting Canada, that means patronizing the luxurious Fairmont properties. In Calgary the Fairmont Palliser was once part of the storied hotel chain’s remarkable railroad hotels and since 1914 has been the premier hotel in Calgary. While carefully maintaining the fin-de-siècle lobby and interior finishings, I was thrilled to see that the rooms themselves had been recently updated, adding modern comfort and style to a classic luxury experience. The hotel enjoys a fantastic location in the heart of the city as well as all of the normal comforts one would expect from any Fairmont property. Add in the Gold Lounge with food and drink presentations throughout the day, and this is the perfect home base from which to explore the city.

If you’re like me, then one of the first things you do in any new city is to walk around and explore the neighborhood a little. Luckily in Calgary that’s fairly easy to do, even in the winter months when the temperatures tend to be freezing. Joined by a local photographer, I was thrilled for the chance to experience the city through his eyes, for him to show me what he loves most about Calgary. One doesn’t normally associate landmarks with Calgary, but there are a few and the modern architecture of the city is undeniably beautiful. I first noticed this at the Peace Bridge, at one time controversial but now just part of the city landscape. One of my favorite aspects though of exploring Calgary was discovering all of the public artwork on display throughout the city. For every new construction in the city, a corresponding piece of public art must also be erected, which makes Calgary a lot of fun for any art lover to discover. My favorite piece is also one of the city’s most well known, the Wonderland sculpture in front of the Bow Tower.

Looking at it from a distance I could obviously tell that it was a young girl’s head, but it seemed solid. It wasn’t until I got up close when I realized that it was made from a steel mesh, greater details becoming clear as I stood in front of it. It’s also an interactive piece, with two openings that allow visitors to walk through, to literally become part of the artwork itself. I’m not normally one for modern art, but even I couldn’t help but be impressed by this graceful piece. Doing some research I learned that the artist said he wants Wonderland to inspire everyone who experiences the sculpture. He believes that the architecture of our bodies is the palace for our dreams. A captivating concept and one that is perfect for Calgary. With public art found throughout the city, it’s a fun place to explore if only to discover these special moments. 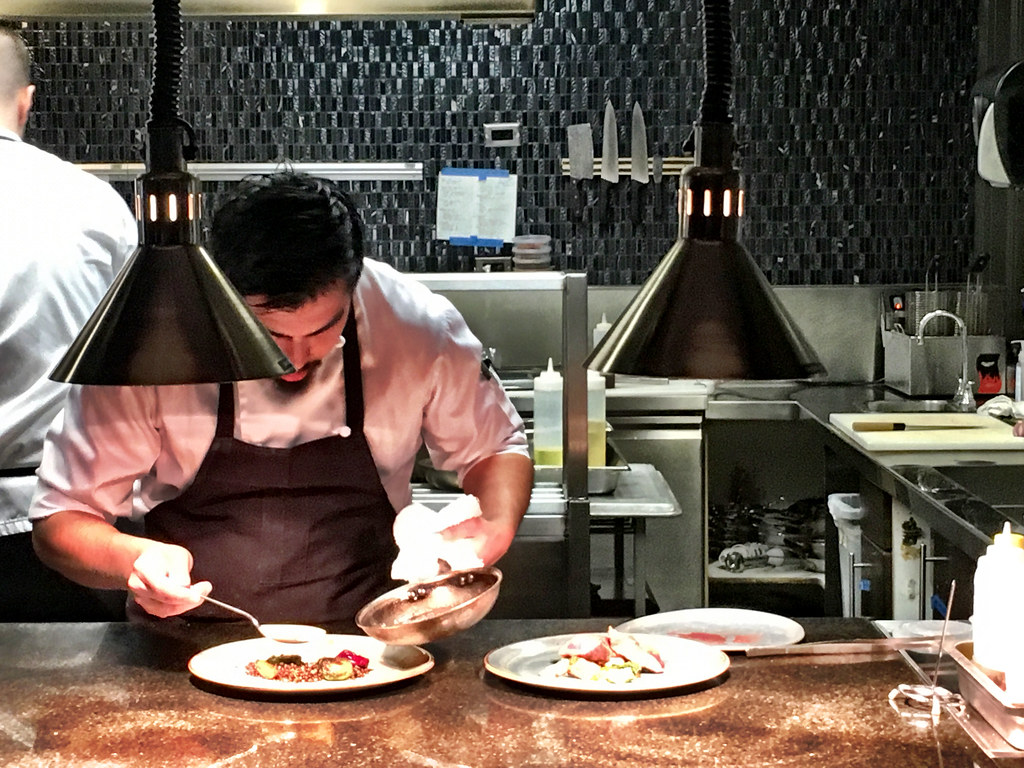 Like so many cities I’ve visited around the world, Calgary also is going through some remarkable changes, most notably when it comes to food and drink. Just a few years ago you would have been hard-pressed to find more than one meal that didn’t include steak and potatoes, today though the options are just as varied as any other city in the country. There are far too many restaurants to name here but a couple that stood out to me are National 10 with a locally inspired menu, craft beers and even a bowling alley. Another notable eatery is the Argentinian-inspired menu of charbar where the must-order items are the pizza-like fugazza, deep dish style pizza that’s as good as any other I’ve tried around the world. For a real taste of the Calgary food scene though, be sure to join one of the tours offered by Calgary Food Tours. The expert guides provide in-depth walks around a variety of Calgary neighborhoods, with plenty to eat and drink along the way.

Home to the 1988 Winter Olympic Games, Calgary has managed to accomplish something few other hosts have been able to replicated – make use of the old Olympic sites. Enter in WinSport, located at Canada Olympic Park and about 15 minutes from downtown Calgary. There are a variety of experiences you can enjoy, and locals benefit from all kinds of options from summer camps for kids to some of the best mountain biking trails in the country. For tourists like me though, two experiences are the chief draw and the reason I stopped by – the zipline (Summer only) and bobsleigh. One of just a few bobsleigh tracks in the world, becoming a member of the team if only for a run is one of the most exhilarating experiences I’ve even tried. In the winter the track runs as it would have during the games and in the summer the same sleds are mounted on wheels. At the helm are Canadian bobsleigh pros and the resulting run down the track is something you’ll never forget.

Let’s be honest; most people who fly into Calgary International Airport are en route to some of the amazing regions around Alberta, from the southern Badlands to the more well-known Banff and Lake Louise National Parks. And that’s fine, all of those areas are indeed amazing, but not only do I recommend spending some time in Calgary itself, but I also recommend hopping into the car and exploring the nearby region surrounding the city. I did just that early one morning when I traveled to one of the most remarkable animal experiences I’ve ever visited, the Yamnuska Wolfdog Sanctuary.

An easy 45-minute drive from Calgary, not too far from Canmore, I was excited because before even meeting my first wolfdog I knew that my morning spent at this remarkable facility would be a highlight of my time in Alberta. As the owner of three dogs, including two slightly wolfish Siberian Huskies, I’m always drawn to dog-related activities when I travel, but of course Yamnuska is a lot more than that. The mission of the remarkable Yamnuska Wolfdog Sanctuary is fairly straightforward: to rescue and rehabilitate wolfdogs and to educate the general public about these beautiful pups. For whatever reason, some people see status in buying a wolfdog, but as the dog gets older they realize that there’s no way they can take care of them. So they end up at shelters or worse, euthanized because no one knows what to do with them. That’s where the Yamnuska Wolfdog Sanctuary comes in and spending the morning on one of their interactive tours was as much fun as I’ve had in a long time. As the owner of Siberian Huskies, I felt a certain kinship to these amazing wolfdogs, one of which even looked like a twin to one of my furry kids. The Sanctuary is about more than playing with the dogs though, education is at the heart of the experience. Convincing people that these probably aren’t a great house pet but also letting people know that the wolfdogs aren’t dangerous, both goals are incredibly important to make sure these dogs don’t suffer needlessly and enjoy happy lives.

No matter what you decide to do on your next trip to Alberta, be sure to spend at least a little time exploring the hub-city of Calgary. Yes, the province is enormous and is home to some of the most remarkable landscapes on the North American continent. I get that. But I also understand the need to explore the cities of Alberta as well and to experience life in these dynamic and energetic places. Calgary in particular has a lot to offer, you just have to devote a few days exploring on your own to fully understand what makes it so much fun to visit.