So it turns out that many of us have been wrong for a very long time. Words matter and when it comes to describing the islands of French Polynesia that is especially true. As an American, I would normally use Tahiti to describe this part of the world, as do millions of other people, but that’s not accurate. No, Tahiti is just one of 188 different islands within French Polynesia, otherwise known as the Society Islands, and as I learned on a weeklong luxury cruise around them with Windstar Cruises they are all very different from one another. While Tahiti and Bora Bora seem to get all of the attention, I discovered that every island in this remarkable part of the world has something special to offer visitors and so today I want to highlight my favorite moments on these special islands, places that may be linked but which enjoy very separate personalities.

Moorea – Journey with a local photographer

One of the most popular islands in French Polynesia, Moorea has inspired everyone from Gauguin to Michener and well beyond. It’s a special place full of stunning beaches and soaring mountain peaks which is one reason why I wanted to experience it with a local through one of Windstar’s offered excursions, spending a day on Moorea with a local photographer. Rough mountain peaks jut up from the island, creating an ethereal, otherworldly sensation even when admiring it from the boat. Those peaks became a fixture on our jaunt around Moorea, first as a lookout to understand and admire the geography of the island, but later on as inspiration. It’s frankly not hard to find inspiration both in the history of the island as well as its beauty. From those mountain peaks to rural farms and back along the beaches for which Moorea is so well known, the day spent with a local photographer was one of the best I’ve enjoyed in a long time and was the perfect first introduction to this very special island.

If you spend any amount of time around Tahiti you will notice that vanilla seems to be for sale wherever you go. Tahitian vanilla is famous around the world, but it’s actually not produced for export anymore, not really. The days when Tahitian vanilla was grown, cultivated and sent around the world are long gone and today it’s produced mostly for the tourist trade and to maintain what the government calls an important source of pride and tradition in the islands. And that’s fine, there’s no harm in that and it’s something I’ve seen in countries all around the world. The vanilla is good and I myself even left for home with a jar in my bag. The real takeaway in a tour I took to a vanilla plantation on the island of Tahaa, the so-called Vanilla Island, wasn’t to see how they produce the vanilla. Frankly, it wasn’t that interesting. No, the real value was getting to see life on the island away from the private islands and port-side stalls selling trinkets. The village may have been humble, but the kindness with which I was met was nearly overwhelming, and spending some time with the farm owners was a morning I know I’ll never forget. But I was in the South Pacific and knew that I had to experience some of those iconic moments in the water, which is why I was thrilled that this excursion also included snorkeling time in the crystal clear waters with some local sharks. No need to fear, they were harmless blacktipped sharks and along with the colorful fish and massive stingrays, the experience was one of the best snorkeling swims I’ve ever enjoyed. 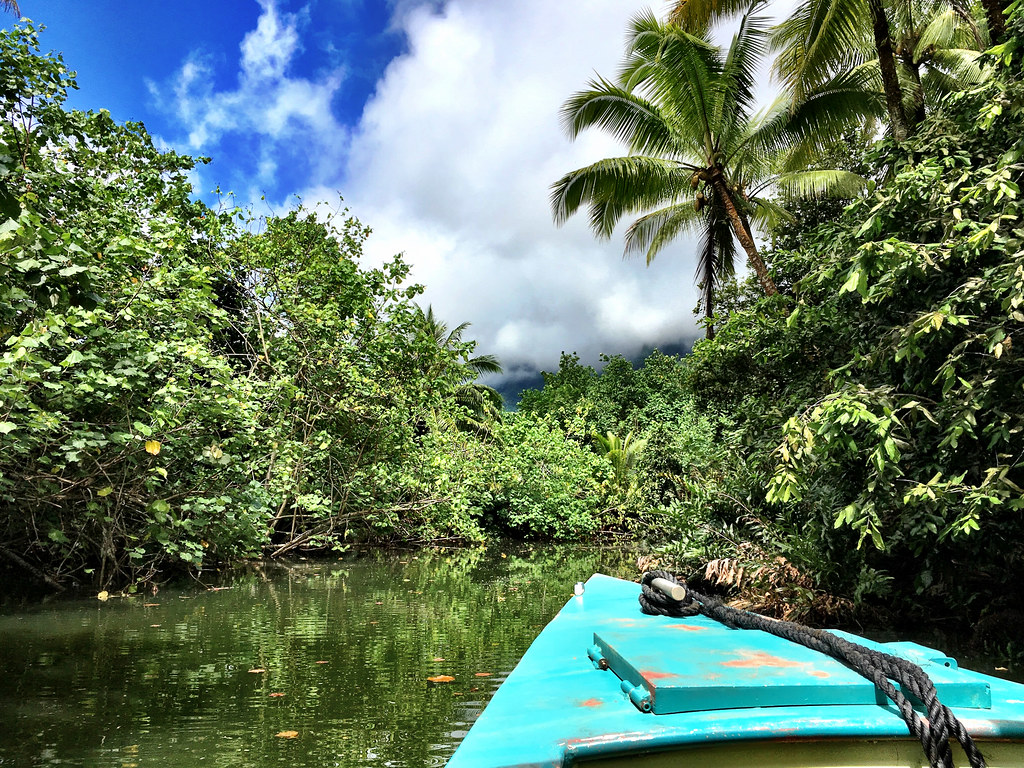 Our guide on this island was a character, that much is without doubt. An older man, he has called the small island of Raiatea home all of his life and he has the stories to match. Throughout my week with Windstar I joined many excursions, including the one on this small island that takes guests out to explore the only navigable river in French Polynesia followed by some relaxing time on a private island or motu. What the excursion description didn’t include was the hours of commentary by the most interesting person I met during my week exploring the South Pacific. I’m pretty sure most of what he said was embellishment, at least I hope it was, but his stories were without a doubt entertaining. Within those fanciful tales though were nuggets of truth, laughter masking some difficult times in his life. The youngest of nearly 20 children, he went on to sire almost as many himself and his family must be the size of a small village. Preferring to call the island’s interior home, for most of his life he existed without what many of us would call necessities in life. And yet, he was one of the happiest people I’ve ever met. He lived for and in the moment and as long as he had something in his belly and a few bucks for a beer, there wasn’t really anything else he cared about. Maybe it’s a little optimistic of me, but I’d like to think that this ethos, this way of thinking about the universe wasn’t unique to him, but rather is an undercurrent in the region. Maybe that’s why it’s been a siren call to so many people from around the world for so very long.

I love to travel and almost always have a great experience wherever I end up. Sometimes though all of the stars align and a perfect moment is created, such as what occurred for an entire day when I stayed at the luxury resort Le Meridien Bora Bora. I’d dreamt of visiting the South Pacific for decades and the entire week spent sailing around the islands was as amazing as I had hoped it would be. But at Le Meridien I experienced relaxation and contentment the likes of which I never knew possible for me. As a Type-A person, I don’t particularly like to relax. I enjoy being busy, but while on Bora Bora I decided to go with the flow and the results were amazing. My favorite moment was sitting on the back patio of my private bungalow, watching the sunset and pinching myself repeatedly that I was actually there. Nothing was wrong in the world and I was honestly as happy as I’ve ever been while traveling. 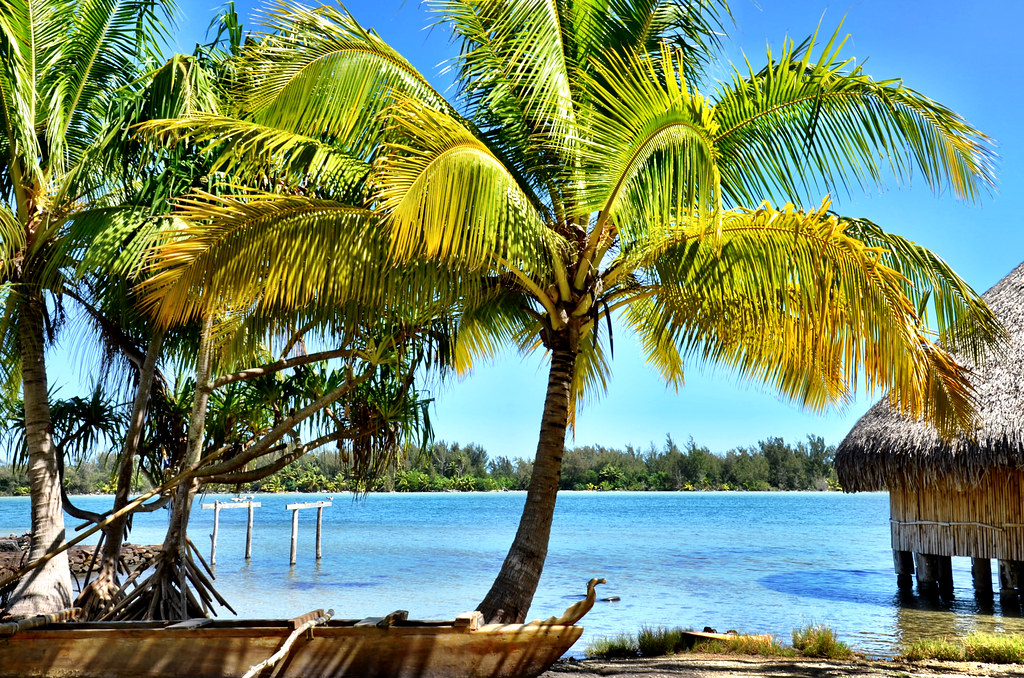 One aspect of French Polynesia that tends to get overlooked is its long history before the arrival of European explorers. The story of the early Polynesians is one of the most fascinating, and least understood, tales of migration and ingenuity in the world. Leaving Taiwan and sailing into the horizon, these early peoples found new homes in small atolls and islands across the vast Pacific. That’s an amazing feat and one that we simply don’t know enough about, but clues to life on the islands can still be found, although they are rare. That’s due to those same early Europeans and the accompanying missionaries who destroyed with great fanfare the “pagan” relics and sites that at one time were so important to the early Polynesians. On Huahine though I joined a local expert as she led us around the island, discovering these sites and learning more about early life on the island. While I came to love life both on the ship and swimming along the reefs, it was good to also spend some time inland, learning more about the history of the region and seeing topography completely different from those perfect beaches. Along the way I not only explored these altars and ruins, but I also gained a fierce appreciation for the early peoples of this island. Life was hard, but if they could make it all the way across the ocean then surely life on Huahine wouldn’t be so bad and over time they transformed a somewhat barren island into the tropical paradise it is today. When visiting the South Pacific it’s important, I think, to spend at least some time away from the resorts and beaches and get to know the history of the islands and her people, it’s only then that true love and appreciation for this remarkable part of the world will ever truly develop.

If you’re visiting the South Pacific, then you will fly into the capital city of Papeete. What most people don’t do is spend a lot of time on the island, opting instead to visit more remote and more picturesque islands in the group. While I whole-heartedly recommend visiting both Moorea and Bora Bora, I also firmly believe that it’s important to spend some time on Tahiti itself, experiencing life on this sometimes overlooked destination. I booked a day tour that included a drive around the island with many stops at scenic spots along the way. I had a day to kill frankly between the end of my cruise and my evening flight and it was the most productive use of my brief time. Turns out, it was one of the smartest decisions I made on the entire trip. Seeing the waterfalls strewn about the island and the many coastal panoramas was of course great, but it was the final stop of the day that meant the most. Venus Point is the famous spot from which Captain Cook moored in order to observe the century’s second transit of Venus, the sole reason he was in the region to begin with. Today the beach and surrounding area is a gorgeous spot on the island’s north coast and when I was there, it was packed with people. I asked the guide about the popularity, it wasn’t all that convenient for tourists to be honest. He said it was mostly locals or people staying on the island for a long vacation and I approached the site with a different perspective. Kids were running around chasing their dogs, teens were skateboarding and couples were unpacking lunches on the beach. I was allowed into something rare when we travel, I was part of the local community, if only very briefly. I’m not saying that I instantly connected with the Polynesian culture and spirit at that moment, I didn’t. But it was nice to be privy to daily life on the island and, when combined with a day spent driving around Tahiti, helped paint a more realistic version of the island than I would have ever had if I’d only stayed within the confines of a resort.

With so many islands in French Polynesia, I can’t wait to return and add to what I hope is an ever growing list of fun island excursions in what is truly one of the most remarkable places on the planet.